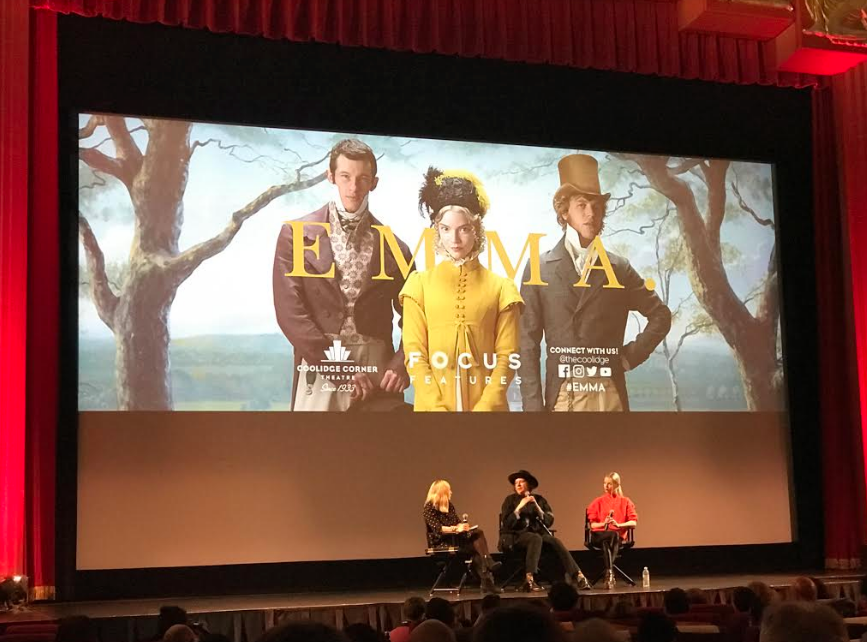 An enchanting landscape, comedic characters, and elegant, frilly costumes all create a refreshing and charming film adaptation of Jane Austen’s “Emma” that is perfectly tailored for 21st century viewers.

On Feb. 25, Coolidge Corner Theatre held a special screening of “Emma” that was followed by a question and answer session with actress Anya Taylor-Joy, who played the titular character, and “Emma” photographer-turned-director Autumn de Wilde.

The plot follows the young, clever and rich Emma Woodhouse as she embarks on a mission of matchmaking while navigating her social status, and eventually finding love herself, in true Austen fashion.

“Emma” is one of the many adaptations of Austen’s 1815 classic novel. In 1996, Gwyneth Paltrow starred as Emma in a period version and in 1995, “Clueless” revived the story into a modern Beverly Hills setting with the peppy Alicia Silverstone.

Director de Wilde brought the romantic comedy to life with a vibrant score consisting of folk music and opera, synchronized dancing and luscious bonnets, parasols, and dress fabrics. The dreamy set was also a spectacle to admire with gorgeous framing of the English countryside and elaborate, pastel interiors modeled off the Regency period. During the Q&A, de Wilde mentioned how exciting it was to do production design for this movie’s setting as well as updating this classic for a present-day audience.

“I didn’t really think about comparisons, I don’t think that’s healthy,” said de Wilde about her adaptation. “I sort of celebrate…I don’t think there will ever be too many versions of Jane Austen because she’s such an important writer.”

For de Wilde’s directorial debut, this film solidifies her role as an emerging feature film director with her picture-perfect 19th century set designs and intoxicating shots.

Taylor-Joy also proves herself as a thriving up-and-coming actress who shines as Emma and is the perfect Austen heroine with her driven personality and beautiful looks. Taylor-Joy turns the gossipy Emma, a borderline unlikeable character, into a loveable young woman that audiences will cheer for. It’s easy to dislike Emma at first, but after a few bubbly scenes she quickly becomes someone to embrace.

The budding actress holds her own alongside a talented cast which includes Bill Nighy, Josh O’Connor, Mia Goth, Johnny Flynn and Tanya Reynolds. She also rocked her character’s exquisite gowns and cascading blonde locks that were essential in completing the rich and lively vibe of the film.

Nighy steals some scenes in the film as well by playing the eccentric and wealthy Mr. Woodhouse who tries to pamper his daughter. Goth also puts on an energetic supporting performance as the cheerful, but mysterious Harriet Smith, who Emma finds a love interest for.

One of the most important, but discomforting scenes in the movie is a lush picnic scene where Emma makes a harsh joke about her talkative family friend, Miss Bates, played by comedian Miranda Hart. This is a turning point for the movie when Emma realizes her potential to be insensitive and must begin to confront her privilege and broken friendships.

“I love Emma because she is so complicated and she can be both so wonderful and charming and have a good heart, but also such a brat,” said Taylor-Joy during the Q&A session.

It’s easy to mess up a film adaptation of a beloved 19th century novel, but de Wilde exceeds expectations with an edgy and refreshing film, while still capturing Austen’s honest, comedic writing about female characters and their relationships.

“Emma” is a film for Austen fans to indulge in with its superb cast, intricate set and fashionable wardrobes. Viewers who aren’t familiar with Austen’s writing will quickly be absorbed into her world of romance after following Emma’s enthralling story.