Men’s basketball scores on ‘Hoops for Hunger’ and senior night 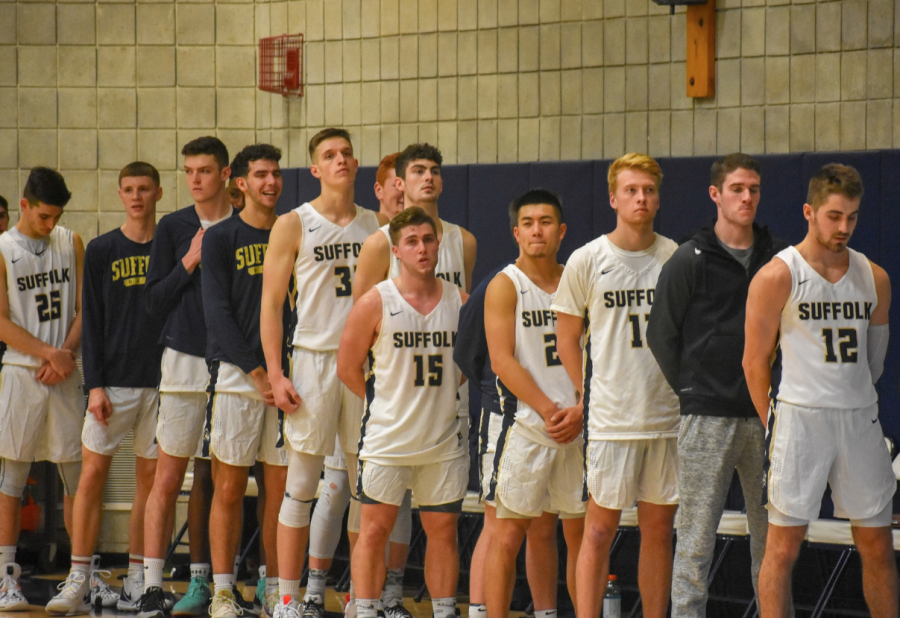 The Suffolk men’s basketball team hosted “Hoops for Hunger” at their last regular-season game at the Larry and Michael Smith Court last Saturday. This was also followed by the team’s senior night against Regis College.

Fans helped bring non-perishable goods to the game for the Suffolk CARES pantry. The Suffolk CARES pantry gives students the necessary resources needed to support themselves. The pantry is managed by the director of student outreach, Amanda McGrath. Any Suffolk student is able to utilize the supplies without question.

Alex Wilcox, a Suffolk grad who is in the office twice a week doing inventory and collecting donations, was tabling for the pantry. Here students, faculty and parents were able to drop off items. For every contribution, the donor was entered to win a pair of Celtics tickets.

“A lot of students here face food insecurities, even though Suffolk is good with financial aid, that just covers attending the school and not food,” said Wilcox. “Boston is so expensive. The pantry is welcome to all students and free for everyone. You don’t have to meet any requirements.”

“If you are an enrolled Suffolk student you are free to come. You can take whatever you need, we have food, household items, and school supplies.”

Wilcox explained that these items can include food but also household items and food. The turnout was a success, as the table was full of items and Wilcox said she believes it was the best event Suffolk CARES had put on so far.

Senior guard Jonathan Eng from Wayland, Massachusetts supported the cause, “Hoops for Hunger” at their sporting event.

“This is our last regular-season game. Definitely happy, we ended on a high note going into the playoffs,” said Eng. “We just need to bring the same juice when Tuesday comes around. Doesn’t matter who the opponent is, we just need to come out with that same energy. I think Hoops for Hunger is going to a good cause and I’m glad we got a lot of contributors for it.”

Last season, Duffy became the 30th member of the basketball program to put up 1,000 career points. Grillakis has played in a total of 88 games for the Rams and so far this season has contributed 103 points. This season Powers is shooting his best percentage from the field at 43% to go along with an impressive 37% from behind the arc. Eng has started in the most games of his career this season and delivered in a big way with over 50% from the floor and 47% from the 3-point line.

On Tuesday, the team faced Albertus Magnus in the Great Northeast Athletic Conference Quarterfinals. They fell to the Falcons in a hardfought 79-82 loss. Senior and Captain Thomas Duffy had 24 points, making 10 of his 20 attempted field goals. This was the last collegiate game for the teams four seniors and captains.