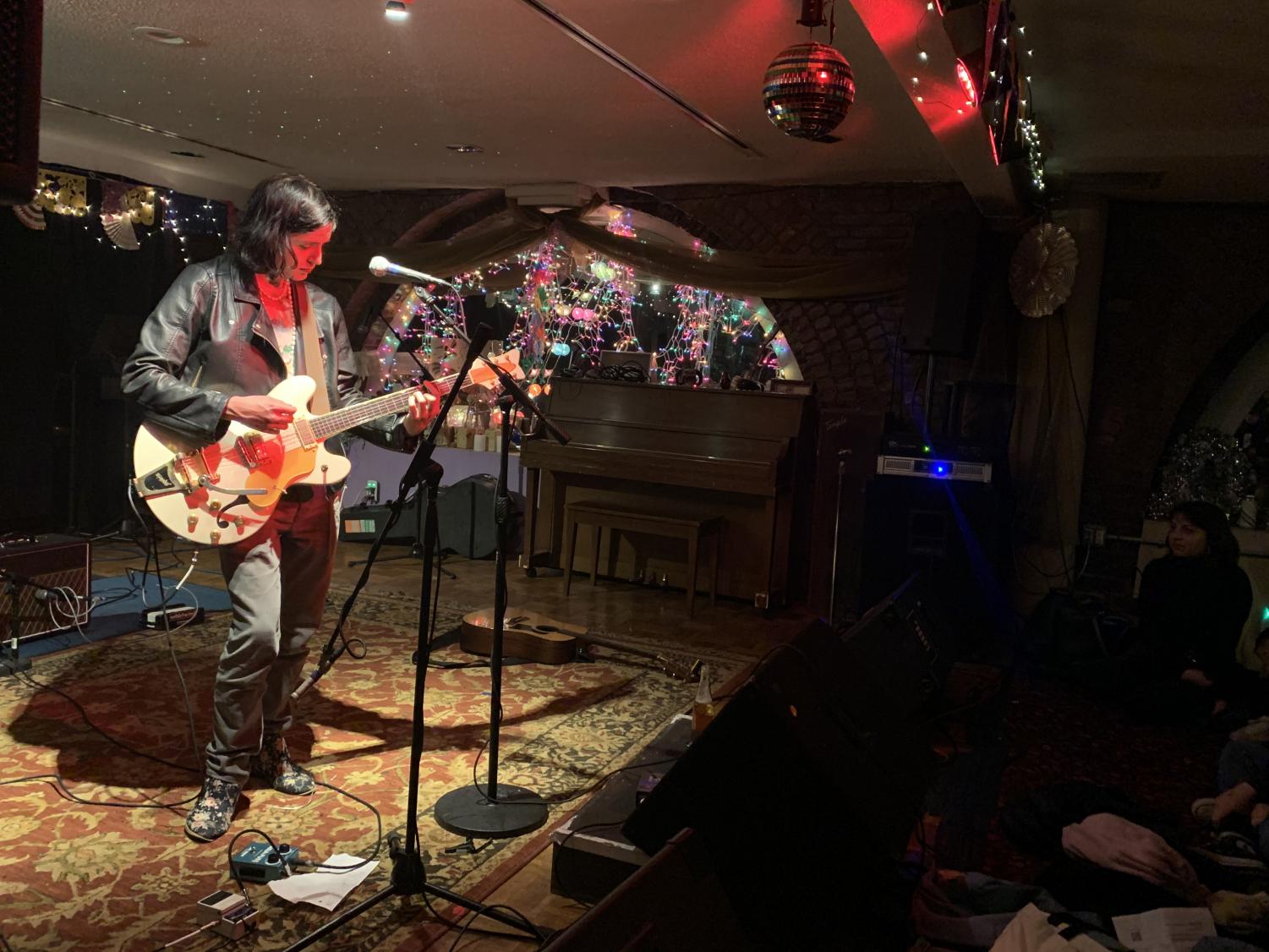 Ezra Furman performing at ONCE Ballroom

Under a warm, red light, fans gathered in the cozy upstairs lounge at ONCE Ballroom in Somerville last Tuesday for a solo set by musician Ezra Furman. The fifth installment of her residency at ONCE, titled “Intimacy,” brought another packed house.

Furman, 33, whose music career blossomed in Somerville, has toured the world to share her music that takes a personal look at politics, society and what it means to be a human. Coming off the success of her 2019 album, Twelve Nudes, Furman’s performance gave attendees a peek into her unique punk-rock style.

Quite possibly one of the most humble and introspective artists off stage, Furman transforms once she begins to play. Clad in a chunky pearl necklace and worn-in leather jacket, she started off her set with “Wild Feeling” off her 2011 album with her former band, The Harpoons. Her gritty, soul-filled voice seeps through your skin and exists there for as long as it’s audible.

Identifying as trans and bisexual, Furman’s music often reflects on her life navigating her sexuality and gender. Commenting on society’s view of that, her songs stand as protest to naysayers. Her tenacious attitude towards causes she is passionate about was present during her solo set; however, she did let her guard down to allow listeners to get a sense of her as an individual, not just a singer and songwriter.

Furman didn’t have much to say in between songs, but she didn’t have to. Her trembling voice coupled with her confident and demanding playing of the guitar were all the audience needed to feel whole. But when she did speak, it was to crack jokes that only made you like her more.

“I imagine there’s someone in the audience who doesn’t even like music,” muttered Furman while tuning her guitar. “Imagine being that person.”

The most enjoyable part of the entire set was the vulnerability that you could feel coming out of Furman more and more with each song. You could feel the disbelief she had at the fact that anyone would want to come watch her play an acoustic set, let alone for the fifth time. Starting out with four shows, ONCE added two additional shows to please fans, all selling out almost instantly. And it’s pretty clear why.

Performing songs from her past and most recent albums, Furman also played tracks from the second season of the Netflix series Sex Education, which is made up of Furman originals. With themes of angst, love and vulnerability songs like, “Dr. Jekyll & Mr. Hyde,” and “Amateur,” allowed Furman’s vocal ability to shine. Her specifically placed anger and blunt attitude resonate with listeners of all ages and genders in the crowd.

A cover of Neil Young’s “Motion Pictures” made it on the set, the moody chords and lyrics fit perfectly into Furman’s theme.

“Well, all those people, they think they got it made. But I wouldn’t buy, sell, borrow or trade, anything I have to be like one of them, I’d rather start all over again,” sang Furman, her voice cracking over the ups and downs of her guitar playing.

Furman thanked the crowd for “supporting local musicians and queer culture” before wrapping up her set. Her runny black lipstick was only more smudged, and the thin pieces of hair in her face she tried to hide behind her ear were no longer listening to the efforts of her fingers, now sticking to the sweat on her forehead.

She closed off the set with “Day of The Dog,” off her 2013 solo album. Soulful and honest, Furman gave herself fully to the audience.

Furman’s style works because it is so effortlessly hers, completely crafted from her experiences, successes, failures and efforts to figure things out in life. A journey of self-expression, Furman’s intimate set lived up to its title.