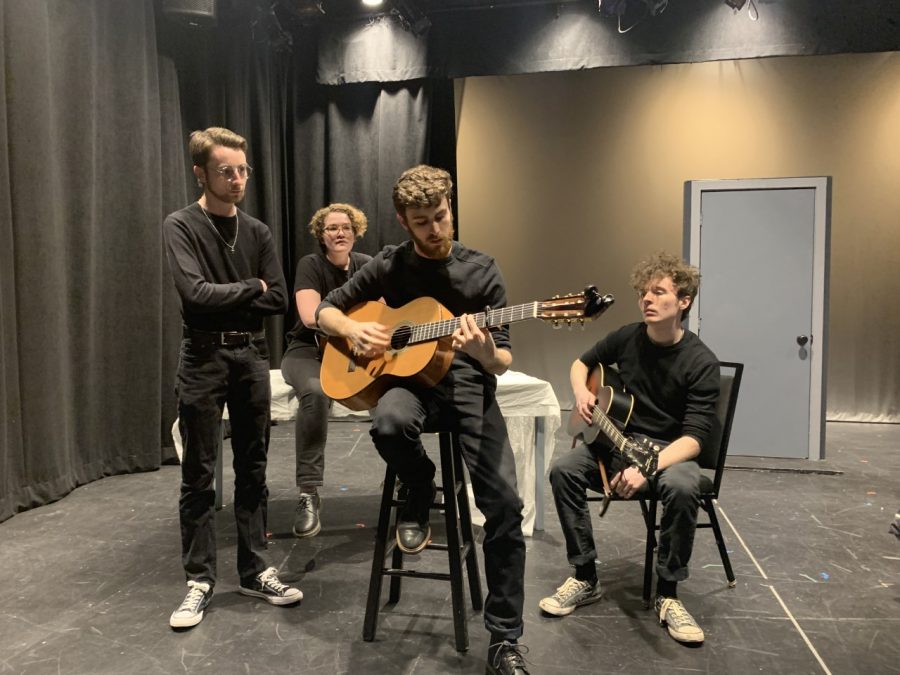 To Suffolk senior Alice Byrne, there was something in the way George Harrison moved her, with a lifetime of music she found inspirational enough to turn into an original play.

Byrne wrote and directed “Here Comes The Moon,” which will debut at the Sullivan Studio theater on Friday as part of the Suffolk Spotlight Series.

The show focuses on the final years of Harrison, one of the four members of the Beatles, beginning with his lung cancer diagnosis in the late 1990s and continuing until his death in 2001. In addition to highlighting the end of his life, Byrne included two flashbacks to his time with the Beatles.

Since the Beatles were her father’s favorite band, Byrne grew up listening to the band on repeat. Already familiar with Harrison’s work, the playwright said she was inspired by his story because she also had a relative in her home who underwent cancer treatments and she has firsthand experience watching someone in her family combat the illness.

“Here Comes The Moon” will satisfy both Harrison fans as well as those unfamiliar with the artist. Illness is something that affects every family, regardless of their celebrity status, which Byrne said she hopes to demonstrate through the show’s family story.

“These were people, not just the musicians that everyone loves so much,” said Byrne. “They had a life and a really important story to tell.”

Byrne took time to dive into a fair amount of research about the musician in the process of penning the show. She studied Harrison’s autobiography, with excerpts from people that knew him well, to get a greater sense of who he was. The playwright also took Suffolk’s introduction to cancer care class, which heightened her knowledge about the medical side and sparked more interest about treatment.

During the year it took Byrne to write the show, she was challenged by how to portray the characters justifiably and accurately. Since the characters are based on real individuals, she had to find the right balance between her voice and theirs.

“I had a hard time using my own creative voice, but also representing these real people in a way that wouldn’t be disappointing to them if they were to see it,” said Byrne.

Although the production is not a musical, it will incorporate a selection of Harrison’s songs. Audience members are likely to recognize snippets of “All Things Must Pass,” “Art of Dying” and “Stuck Inside A Cloud.” Byrne said that there are some moments when characters will break into melody where they would not normally in life and there are other moments when Harrison is playing guitar and singing just as he would in his own house.

Byrne said that she prefers to follow the guidance of others rather than be the leader, but she has learned how to take command and build confidence from directing this show.

However, Byrne did not turn her vision into a love show all on her own. She has enjoyed exchanging ideas with the nine cast members, soaking in their feedback and suggestions. Her brother is also pitching in as the music director. She said in the beginning, she felt nervous to work with family, but the siblings respect each other’s strengths and share the same personal connection to the story.

“We kind of have the same experience of knowing exactly what this means to us,” said Byrne.

Despite the devastation cancer often causes, Byrne hopes viewers leave the theater with more feelings of optimism rather than fear or sadness.

“Everyone has a loved one that they lose and that it doesn’t have to be so tragic. They’ll always be with you,” said Byrne. “I hope people come out of [the show] in more of a hopeful way.”

“Here Comes The Moon” will play at the Sullivan Studio Theater on the 11th floor of the Sawyer building on Feb. 7 at 5 p.m. Tickets are free but space in the theater is limited.