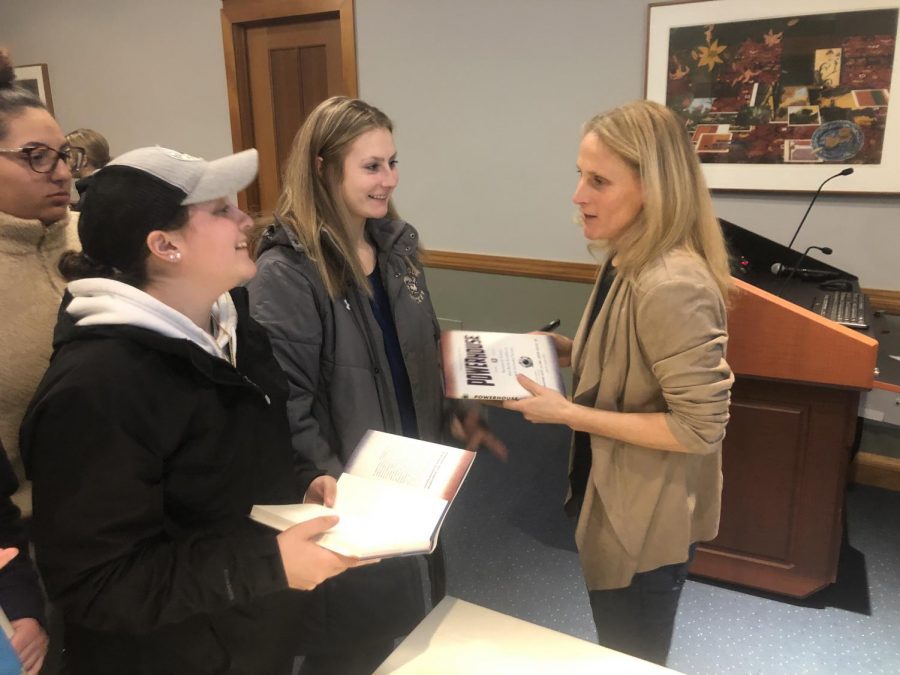 Lilly had an illustrious 23-year playing career, with her greatest achievement of having the most international appearances (caps) of all time with 352. She is a two-time FIFA Women’s World Cup champion, two-time Olympic Gold medalist and four-time NCAA Women’s Soccer National Champion. She is also third in all time goals for the USWNT with 130.

Lilly said there was no specific approach or training regimen that allowed her to play at a high level for a long period of time. She attributed her longevity to her pure love for the game and her mentality.

“I was like, ‘you know what, if I’m still being effective at a certain time of my career I’m going to keep playing’ and that’s what I did,” said Lilly.

She is proud of her achievement as the most capped player of all time.

“Playing 23 years, and having the most caps means that I was being effective,” Lilly said. “If I wasn’t being effective I wouldn’t have been on the field, so I was really proud of my efforts in that and being able to be on the field for that many games.”

Lilly stressed the importance of the mental aspect of being an athlete.

“Physically I still could do stuff, although I was a little slower, but the mental side, you just get drained and that’s what happened towards the end of my career” said Lilly. “When I retired I was just tired. I had one child and I just got pregnant with my second child so I said ‘I think it’s time.’”

Lilly also spoke about her newest book “Powerhouse,” which is based on the success of the 1999 USWNT who won the FIFA Women’s World Cup. She said that she wrote the book to share the lessons she learned during her career such as the focus on small details, teamwork, sacrifice, dedication and leadership.

She also highlighted her iconic goal line clearance in the ‘99’ World Cup Final, which allowed her team to win in the penalty shootout later in the game.

“I could’ve just said ‘it doesn’t matter’ and not do my job, but I focused on the small details and I did my job,” said Lilly.

She told the audience that she had practiced defending from that spot hundreds of times, and her focus on detail allowed her to make that critical play.

Lilly discussed in depth how to be a great teammate and lead by example. She shared a quote from captain Carla Overbeck. “You must be able to put all individual goals aside for the betterment of the team.”

Lilly said that even as a captain, Overbeck would be the first player on the field carrying equipment and sacrificing for the team.

The Suffolk women’s soccer team was able to attend the event as a whole team. Lilly’s bond with her teammates resonated with Suffolk freshman women’s soccer player Cassandra LaBarbera.

“It’s crazy how she grew a bond so large that it became her family,” said LaBarbera. “I realize that I have three more years with [my team] so it’s very empowering to hear her share that.”

LaBarbera said that this part of her talk was especially important to her because she considers her teammates as family. Other student-athletes were simply shocked that Lilly visited Suffolk and were impressed with her approachable and personable manner.

“It was super cool to see that someone so accomplished could also be so humble,” said women’s soccer player Alyssa Barahona. “She told incredibly embarrassing stories of herself to get her message across, and she didn’t have to do any of that.”

Lilly ended her talk with the most important lesson that she learned from playing soccer.

“Life is about the ups and downs, and it’s about how you are able to handle it,” said Lilly. “Everything you do is going to matter to someone, so try to make a positive impact on someone’s life.”