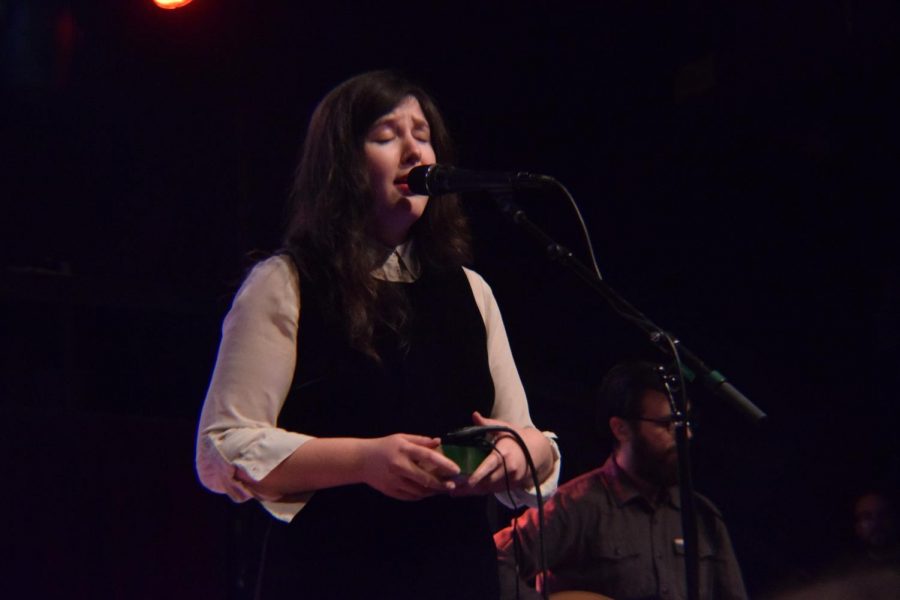 All eyes were on Lucy Dacus as the 24-year-old singer-songwriter’s smooth vocals brought the Royale to a standstill on Dec. 4.

The indie musician’s concert kept the crowd on their feet, moving along to each rhythmic song. Dacus’ well-balanced setlist included a mix of tracks from her 2016 album “No Burden,” her 2018 album “Historian,” her latest EP “2019” and covers of hit songs.

Dacus opened the show with “Fool’s Gold,” confidently taking on lead vocals and synth, while two guitarists and a drummer filled in the rest. As the four bandmates played together, they created a cloud of velvety sound that wafted throughout the venue.

For her second song “Addictions,” Dacus traded her handheld synthesizer for a bass guitar. At first glance, three bass guitarists and a drummer on stage seems like an overkill of loud instruments, but Dacus was able to seamlessly blend her gentle voice with heavy instrumentals.

The singer took a mellow turn later in the night with “My Mother & I.” The other two guitarists switched from bass to acoustic. They casually sat cross-legged on the ground while Dacus stood centerstage, with all ears in the room fixated on her. The stripped-back rendition allowed the song’s poetic lyrics to stand out, along with her soothing vocals.

It’s charming how Dacus’ feathery voice can command any song, even if there are sonorous instrumentals backing her up. She showcased the control she has over her vocal range, singing some notes in a hushed manner and strongly belting out others, always keeping the crowd satisfied.

During the show, Dacus said she is hoping to release a collection of covers sometime in the future. Her and her bandmates played their own versions of Edith Piaf’s “La Vie En Rose” and Bruce Springsteen’s “Dancing in the Dark.” The group added an indie flare to the famous songs, making for unique renditions.

Dacus clearly has her own sound, but each song she played had a slightly different feel, which kept the setlist unpredictable. The audience was constantly looking forward to seeing what the musicians were going to pull out of their pocket next. Since Dacus doesn’t have a huge discography, it was even more impressive how she was able to keep everyone on their toes about her song choices.

The performers were stagnant, choosing not to move around much on stage, besides some walking back and forth and swaying to the beat. Although a more energetic stage presence would have made the set slightly more entertaining, dancing isn’t necessarily needed when playing slower songs. The indie tracks and sweet interactions with the crowd made for an intimate performance.