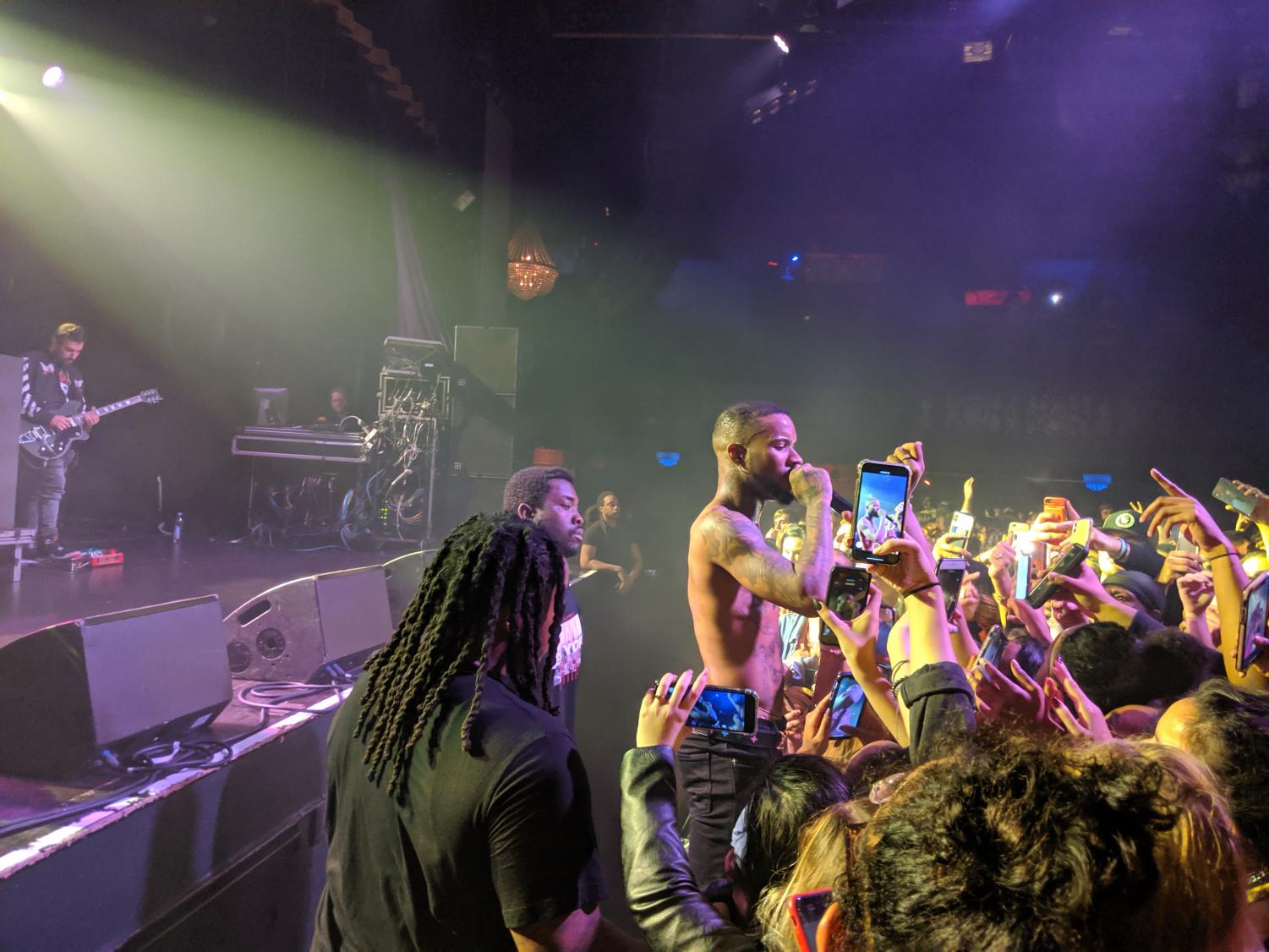 The Brampton-native performer serenades students in the first row as they clamor to take his picture (Eddie Reinhardt / Asst. Arts Editor)

Tory Lanez: up close and personal

The Suffolk Fall Concert was “Litty again” as the Student Government Association and the Concert Committee brought Brampton singer and rapper Tory Lanez to the Royale nightclub this past Monday night. One of the most sought after R&B acts, Lanez surfed his way through a wavy performance, spending more time in the crowd than on the stage. 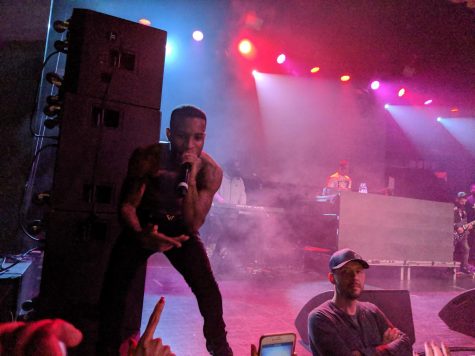 The platinum selling artist greeted the crowd of nearly 1,000 Suffolk students with a high energy ode to his crew, “Shooters.” His vocal range allowed him to seamlessly blend rap/trap sounds with R&B style singing that created a tune that you can both bang your head and sing your heart out to.

After the bass booming track ended, Lanez asked the eager audience to answer two questions: “What city is this?” and “What’s my name?” Although he had arrived late, no one seemed to mind as shouts of “Boston” and chants of “Tory” echoed throughout the club in response.

Switching styles, the standout track “Luv Me” from his 2016 album “I Told You” was a crowd favorite as Lanez opted for a stripped down version of the song that was mostly acapella crooning featuring only small contributions from the guitarist and keyboard player.

At this point, the music cut off and the stage lights dimmed, centering on the singer as he began removing each of his jewel encrusted rings one by one. Next followed his five or so gold chains and his sweater. After placing all of his valuables on the DJ booth, he turned to the crowd and the screams of infatuated fans.

The international star spent the rest of the concert surfing, standing and rolling his way through the top of the crowd being held up by the hands of overzealous listeners. The core strength alone needed to stand while being held up by the students was impressive, but the ability to then sing whole songs while people pushed, pulled and poked at him was truly surprising.

“Forever” a song about the people he came up with and how he will never turn his back on those who supported him “forever and ever,” he sang while rolling over the top of outstretched hands.

When he did finally return to the stage he asked the crowd if they were familiar with his new song “Jerry Sprunger” to which the response was inaudible screams that let him know that even if they didn’t know the song, they wanted to hear it. The upbeat jam samples the classic T-Pain R&B ballad “I’m Sprung” but features Lanez’s flawless falsetto singing and electronic drums that transform the song into a club banger.

“There are definitely other artists that I listen to that I’ve seen them perform and it’s been a let down,” said Suffolk senior Walter Stone. “I like that he was interacting with the crowd and keeping it high energy, made it overall a great show.”

While Lanez shut down the Royale, he wasn’t the only performer of the night as a pair of Suffolk own musically inclined talents took to the stage to show out.

Liv Dulong, who goes by the stage name DJ Liv, is a student and the Suffolk Free Radio Program Director, set the vibe for the night playing classic hip-hop throwbacks and some of the hottest hits from the summer to warm up the crowd. Her first major DJ event went off without a hitch as the crowd fed off the energy of the tracks she was spinning and shouted along to every word.

“I literally can’t explain the feeling I got when I would play a song and people would start singing  to it,” said Dulong. “Just to watch that happen in front of me and be like ‘wow, I did that’ was just amazing.”

Liv wasn’t the only undergrad who got a chance to shine as Oba Oseghali, known as Ishan The Rapper, tore up the stage with his rapid flow and clever word play. His laid back demeanor paired with precise execution gave the audience the impression that he had been there before. His stage presence was undeniable as he had nearly every member of the crowd waving their arms in unison.

“Being on stage was an absolutely crazy experience after this being my dream for three years,” said Oseghali. “Being able to see everyone vibing with me genuinely meant a lot.”