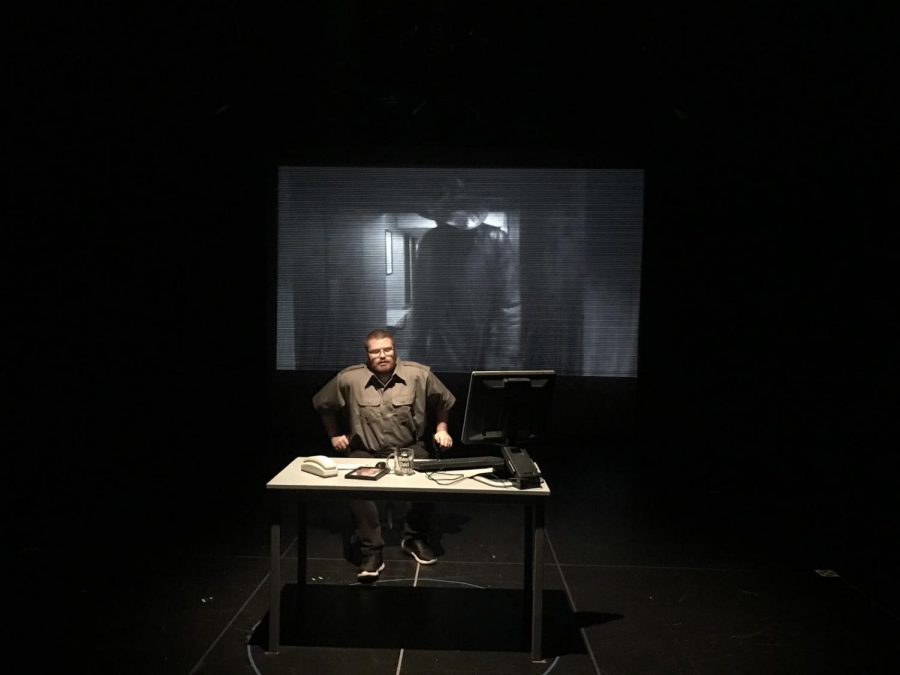 Suffolk’s campus was haunted this past week after Halloween as “Night Shift,” a play written and directed by Suffolk student Nick Cenci, opened at the Sullivan Studio Theater.

“Night Shift” follows the story of Eddie, a security guard working the late shift on the Suffolk Campus during final exam week. After talking briefly with his wife about his distaste for the job, he decides to try and enjoy a quiet evening by listening to music and playing on his phone. The night guard sees a faulty camera forcing him to “stretch his legs” to go and fix it. The audience watches the black and white security footage of Eddie walking through the halls with sudden appearances of the antagonist, or the “boogie man,” played by Rehwandi Stroomer. Unfortunately Eddie forgets his keys, and the shadowy figure eventually catches up to him back at his desk.

Although only 12 minutes long, the audience enjoyed every part of it. The gasps and laughs from the crowd showed their true enjoyment of this unique genre of theater. The end of the play left everyone in the audience at the very edge of their seat.

The video aspect of the show kept the audience intrigued as Eddie ran through the halls of the Sawyer Academic building. The continuity of every shot played into the realistic nature of the entire play, even the elevators opening and shutting was perfectly captured on film.

Horror within live theater is rare and hard to create. Ross Gray, the stage manager, commented on the unique aspects of this particular show.

“I really do enjoy the fact that this is such an avant guard form of theater that we rarely   get to see all that often with the incorporation of video,” said Gray. “And just the genre itself I think that it’s really unique in its own respect.”

Cenci said the 15-page script took him roughly 20 hours to write after edits. The actual staging of the show has been happening over the last couple of months, but most of the work has been aligning the technical elements with the script.

“I’d say 60 to 70% of our rehearsal time spent together was doing recordings. The entire show, I’d say 80% of it is either film going on in the background while acting happens or is solely reliant upon that film,” said Cenci.

Cenci also said this show was inspired by his love for horror films and different visions of scenes that he used to create the final product while directing.

“I wrote [“Night Shift”] as my kind of love letter to horror movies and not getting to see them enough in theater and I was really interested in the film aspect of it and when it came time to putting it up… I just knew what I wanted to look like and as I was writing it I had all of these ideas from film scenes in my head and I knew that I wanted to be apart of that,” the director said.

Another interesting aspect to this show was the small cast of two actors, with the lead played by Justin Peavey. After portraying this character, the halls of Suffolk just weren’t the same to him anymore.

“If there’s anything that I have learned from this show, maybe the safest places aren’t always safe,” said Peavey.