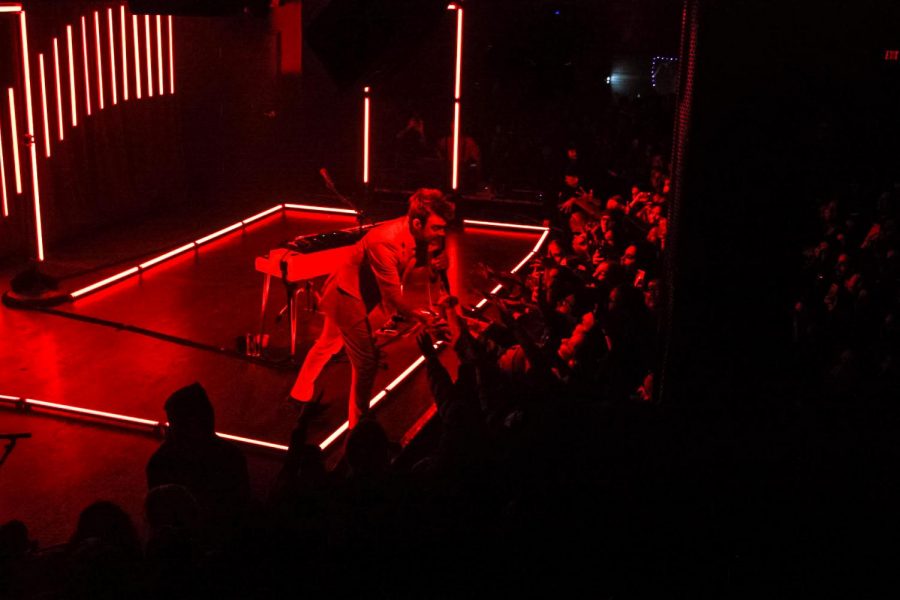 FINNEAS extends a hand to the audience during his concert

When Finneas O’Connell, who performs as FINNEAS, stepped on stage at Boston’s Paradise Rock Club this past Thursday, he was greeted by a crowd of screaming, dedicated fans, all packed into the intimate, sold-out venue.

FINNEAS, the prolific singer, songwriter and producer has previously toured alongside his equally talented younger sister, Billie Eilish. He embarked on his first tour as a headline act this year, with Boston as his last stop. He performed songs off his newly released EP “Blood Harmony” in addition to other singles, all of which his fans sang along to without missing a single lyric.

FINNEAS’s opening act, Lauren Sanderson, successfully pumped up the crowd for his performance with her natural charisma and wild energy. Sanderson’s music, which can be described as mainly hip-hop with elements of both pop and rap, had an infectious effect. It was almost impossible to listen to her sing and watch her jump around stage without wanting to dance.

Her lyrics address a wide range of topics, from relationship troubles to dealing with anxiety and the pressures of early adulthood. At the end of her set, she gave a short, empowering speech about living life unapologetically. It was clear by the audience’s enthusiastic reaction that everyone in the venue felt inspired and touched by her words.

The audience consisted of fans and celebrities alike, including internet personalities Scotty Sire and Todd Smith, in addition to Sanderson herself, all of who stood with the general audience to watch FINNEAS’s set.

FINNEAS began the concert behind an electric piano and sound board. The performer went back and forth between singing and playing the keyboard, the acoustic guitar and dancing, exemplifying his many talents.

The stage was bordered by long, tube shaped light bulbs that changed color and would light up to the beat of the music. The color of the stage lights also corresponded with the songs. For example, while performing his single “Claudia,” the lyrics of which are inspired by his long-time girlfriend, YouTuber Claudia Sulewski, FINNEAS was enveloped in beautiful emerald green light that mirrored the lyrics, “I think you’re gonna change my plans with those emerald eyes.”

FINNEAS imparts deep, meaningful messages that pull on the heartstrings of his audience through his inspirational lyrics and his mature, expressive voice. He has natural talent that cannot be taught, in addition to a charming and humble personality.

“It really means the world to me,” he said to his audience after thanking them for their support and before performing his final song of the evening, “Let’s Fall in Love for the Night.”

This is only the beginning for FINNEAS. He has already produced the music of some of today’s most prominent pop artists, including Billie Eilish’s 2x platinum album “When We All Fall Asleep, Where Do We Go?” and Selena Gomez’s new single “Lose You To Love Me.” In addition to his success as a producer, FINNEAS’s own work is changing the landscape of pop music as we know it.