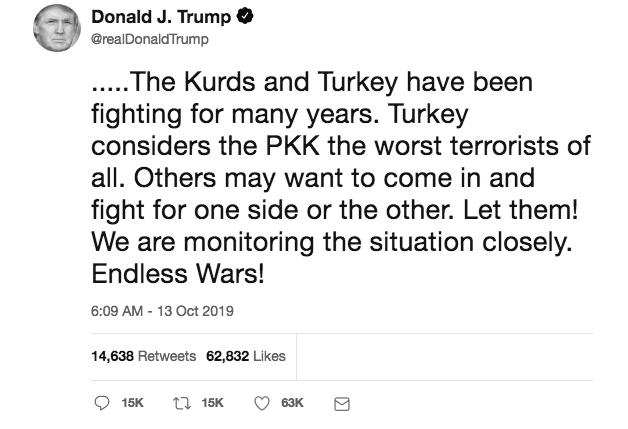 On October 7th, President Donald Trump began the withdrawal process of U.S. soldiers from Syria, leaving a key ally in the fight against ISIS – the Syrian Democratic Forces (SDF) – to fend for themselves from the ensuing Turkish invasion.

This dangerous decision resulted in a rare instance in recent American politics: both sides of the aisle agreeing on something.

This move has been criticized by all sides, the common consensus being that abandoning a vulnerable U.S. ally is not only un-American, it’s just not the right thing to do.

For nearly four years the SDF fought ISIS, at many times shoulder to shoulder with U.S. special forces. Following the withdrawal, an SDF official told the Washington Post that the forces feel deliberately betrayed by Trump. In natural Trump style, this prompted him to log onto Twitter and post a deplorable justification on October 7.

“Turkey, Europe, Syria, Iran, Iraq, Russia and the Kurds will now have to figure the situation out, and what they want to do with the captured ISIS fighters in their ‘neighborhood…’”

Trump’s policy has always been one of isolationism. Throughout his presidency, he’s advocated for bringing the troops home, but this is far easier said than done. The removal of forces does not mean the destruction of Kurdish forces. It means nations like Syria and Iraq are leaving the U.S. sphere of influence, effectively reducing the presence and power that has been built up there over the past 15 years.

“Anyone who wants to assist Syria in protecting the Kurds is good with me, whether it is Russia, China, or Napoleon Bonaparte. I hope they all do great, we are 7,000 miles away!”

Russia certainly has interests in Syria, but more on that later. China historically does not get involved in the Middle Eastern wars and Napoleon Bonaparte has been dead for nearly 200 years.

Trump’s enigmatic and inappropriate actions had a startling effect already. An SDF spokesperson said that in the first days of the invasion, five ISIS prisoners escaped a holding facility in the border city of Qamishli after Turkish mortars bombed the compound.

Some may think Trump would want to make sure all those years of fighting did not amount to nothing. The lack of accountability and security could give birth to a resurgence of ISIS in Syria. According to NBC News, an additional 5,000 ISIS prisoners may potentially escape, as the SDF are forced to abandon post due to approaching Turkish troops, leaving them completely unguarded.

Trump stated many times in the past that he wants to remove all remaining U.S. forces from the Middle East, but at what cost? The withdrawal of troops from Iraq in 2011 led to an ensuing power vacuum, giving rise to ISIS. Leaving a country that is void of a competent government can have dire consequences as has been seen throughout recent history.

Shortly after receiving backlash from even some of his closest supporters like Senators Lindsey Graham and Mitch McConnell, Trump enacted economic sanctions on Turkey, threatening to “totally destroy and obliterate the economy of Turkey” in a tweet shortly after the initial announcement of troop withdrawal.

Vice President Mike Pence tried to soften the blow in the international community by speaking with Turkish President Reccep Edogan, negotiating a five-day ceasefire. However, multiple CNN reports say that the ceasefire has been ignored by Turkish troops and clashes have been ongoing.

The U.S. response is abhorrent and will likely amount to nothing. Erdogan is seemingly unphased by the sanctions and after the collapsing ceasefire officially ends, he will continue his invasion in Northern Syria.

However, he may have to confront another group that has taken advantage over the U.S. withdrawal. Russian President Vladimir Putin has sent mercenaries into Syria, who now occupy the abandoned U.S. military camp in Manbij, Syria, according to SDF officials.

Putin, Bin Salman and Erdogan are political strongmen seeing how far they can go before Trump actually does something. So far, we have yet to see where the president will draw the line.