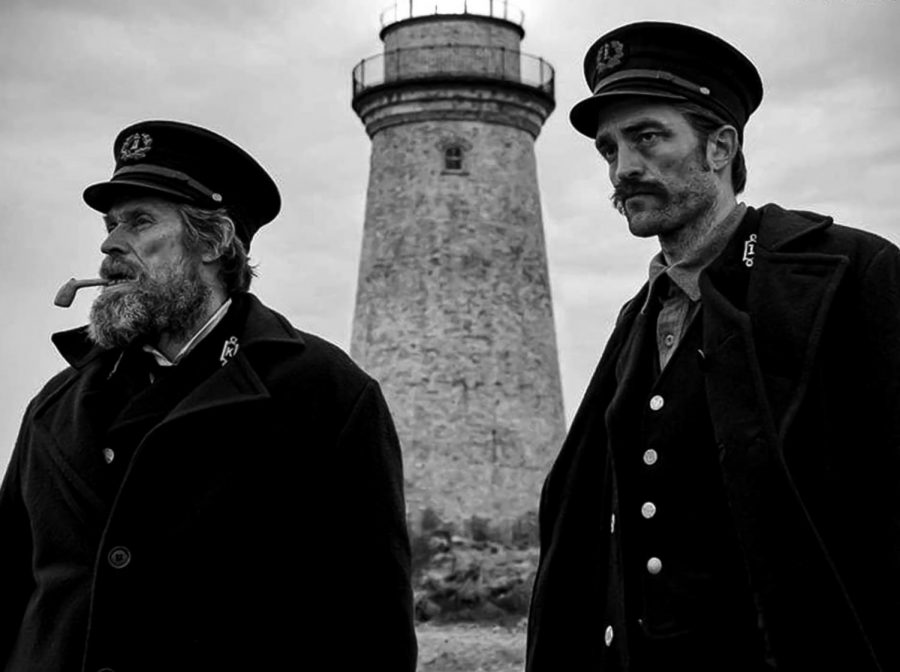 Dafoe (left) and Pattinson (right) brace for the inevitable storm

People often joke about what they would do or bring if they found themselves stranded on a remote island. When that hypothetical situation becomes reality for two sailors in “The Lighthouse,” humor quickly melts into utter lunacy as their chances of escaping drift further and further away.

“The Lighthouse,” released on Oct. 18, focuses on two lighthouse workers, Ephraim Winslow (Robert Pattinson) and Thomas Wake (William Dafoe), in the 1890s. The men become trapped on a small lighthouse when a monstrous storm suddenly approaches. With nothing except hard liquor to fill their stomachs and each other for conversation, they are both slowly driven insane. The thriller follows their steady progression from seamen to madmen.

The movie is filmed entirely in black and white, filled with impressive cinematography that strikes the viewer right from the title sequence, making any desire for color vanish. Grainy long shots of the coastline and the old fashioned lighthouse create a continuous stream of stunning, chilling imagery.

The cinematography is the foundation for “The Lighthouse,” without it the rest of the film would fall apart. The camera angles are always changing, constantly showing the actors and scenery in unique ways. With flawless timing, the camera focuses on the actors’ faces when their eyes bulge and bodies twitch as their seclusion from the rest of the world grows.

The camera gradually pans upward through the lighthouse, starting with Winslow working tirelessly in the sweltering boiler room, all the way up the windy, narrow staircase to the top of the structure, where Wake works beside the lamp, illuminating the giant bulb towards the sea.

The screenplay, written by brothers Max and Robert Eggers, lets minutes pass at a time without the characters talking. Instead, Pattinson and Dafoe convey their thoughts and emotions through their body language. Every facial expression, chuckle or sigh has a deeper meaning. For an actor, conveying feelings through body language can be more challenging than doing so through speech.

Due to the film’s limited dialogue, viewers anticipate every word the actors say. When the actors do engage in conversation, their words seem heavier.

But that isn’t to say that the leading men did not give a monumental performance. Dafoe’s tobacco pipe swinging loosely from his lips as he speaks in a raspy voice personifies the image of a classic sailor. The actor masters his character’s drunken stagger and harsh commands to his apprentice. He is able to be a deranged old man and tough-loving boss at the same time.

Pattinson also delivers a raw performance as the actor fearlessly dives headfirst into his crazy and fervent character. In the beginning of “The Lighthouse,” Winslow is a hardworking man trying to earn a living from simple wages. By the end, after suffering a series of mysterious, extreme hallucinations, he resorts to becoming a vicious and ruthless individual.

Through every development of Pattinson’s character, the viewer can feel his emotions of rage and panic radiate on screen, intensifying more in each scene. Dafoe and Pattinson’s remarkable acting left a chill in the theatre long after the final credits faded out.

The use of sound added another haunting layer to the film. Everyday sounds like a seagull’s squawk and creek of wooden floorboards were amplified over the soundtrack’s slow, sonorous instrumental compositions. As the music and background noise combined, they built tension subtly.

While some may classify “The Lighthouse” as another horror flick, the captivating acting by Pattinson and Dafoe combined with careful attention to detail set this film apart. Although the movie includes its share of suspense, it goes beyond typical gore and jump scares.