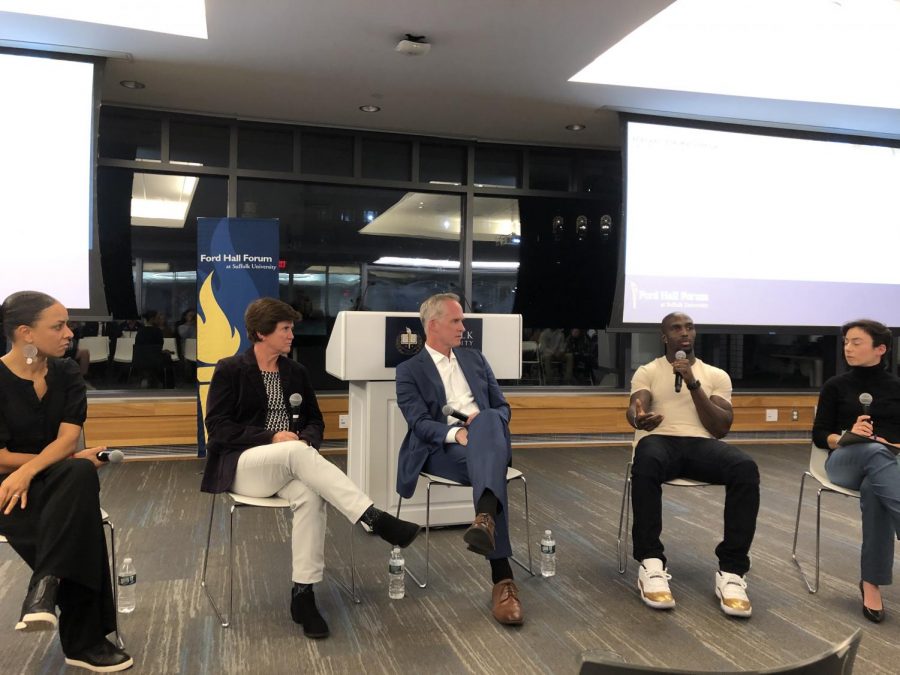 Being an athlete brings the pressure of giving your best performance in every game or match, but what is expected of athletes off the field?

On Tuesday night, Suffolk University’s Ford Hall Forum, “Championing a Cause: The Voice of Today’s Athletes” discussed topics just like this, with renowned athletes and members of the sports community. The event was moderated by NPR’s Shira Springer.

For McCourty, lending a hand in the community and being an advocate is something that comes as a priority. As the forum opened McCourty talked about the work he’s done with his brother Jason to fight against sickle cell disease. The McCourty brothers lost their aunt to sickle cell at the beginning of this year.

“I just think it’s important because I feel as an athlete you have more of a purpose than just playing the sport you play,” said McCourty in an interview with The Suffolk Journal. “For me it’s being able to go out in the community, sickle cell, social justice, really anything I am passionate about to go out there and lend a voice for those who don’t have a voice.”

Bornhost said that at Boston Children’s Hospital they are working on a drug that will cure sickle cell. He said that trials of the drug have resulted in 15 months of no symptoms in some patients. Bornhost praised the McCourty brothers for their work with this cause.

“Back in the very beginning 10 years ago, Devin was there, he raised money for the hospital, he raised awareness…someday they’re going to hoist a trophy when we cure sickle cell and on the names of that trophy are going to be doctors, nurses, researchers, but Devin and Jason’s names will be on it as well,” said Bornhorst.

Heinrichs, talked about the way that sports and advocacy have changed since she was an athlete. In her time on the field, female athletes didn’t have a voice, but today through many different outlets their voices are being heard.

“[Female athletes] connect with their fans in a social networking space and they want people to hear their voice because they know their voice is very different from male professional athletes for example,” said Heinrichs in an interview with The Journal. “Not to compare or pit against, but they just understand the message they have and the opportunity they have as role models.”

The group also discussed the actions of U.S. Women’s Soccer player Megan Rapinoe and how outspoken she’s been on political and social issues. Splaine-Salwasser explained that people with platforms like Rapinoe’s shouldn’t be the only ones with a voice.