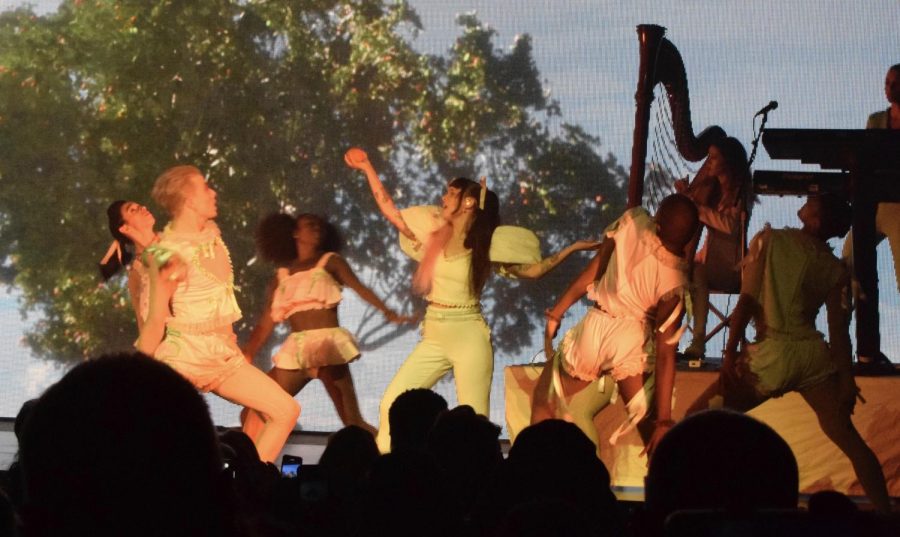 Class was in session at the Orpheum Theatre on Sunday, Oct. 19 as Melanie Martinez brought the crowd from kindergarten through high school during her Boston stop of her K-12 Tour.

Martinez’s pastel colored concert was in support of her latest record “K-12,” which dropped on Sept. 6. Through angsty lyrics and synth beats, the 13-track concept album takes listeners through the hardships of each grade level that often go untalked about.

While the album relies on heavily discussing school for both aesthetic and content, Martinez developed the fictional universe to critique society, focusing on issues like body image, gender roles and the loss of innocence as kids grow up.

Martinez also released an hour and a half long film of the same name to accompany the album, adding a cinematic element to her audio. The movie opens with students riding in a pink bus driving to a school in the clouds, where the rest of the story unfolds. Her stage production mimicked the movie, and certain scenes from it played on the screen behind her.

The singer stuck to her soft, pastel-colored style, as the stage was flooded with light pink, yellow and blue costumes, scenery and lights. The dancers, clad in baby-like clothing and slicked back hair, looked more like porcelain dolls than humans when they leapt and spun through the air.

Boston’s Orpheum Theatre was the ideal background to compliment the imagery Martinez and the creative crew behind the production built. The opulent theater blended impeccably with the historic, mansion-like feel of the set and the baby-doll costumes to create a beautiful performance.

Killer choreography by an excellent team of background dancers kept the show lively as they performed alongside Martinez. During some of the transitions between tracks, some dancers took the stage by themselves, giving the audience a taste of their individual skills through a variety of solos.

Fans of all ages piled into the venue, despite Martinez’s heavy lyrics about sensitive subjects, with no shortage of foul language, and the performers’ revealing costumes and provocative dancing.

One of the drawbacks of the otherwise visually stunning performance was the lengthy set changes and visible stage crew. To be able to essentially recreate an entire movie on11stage, the crew was constantly moving the set around during lengthy interludes. The crew made no attempt to hide themselves, ironically pairing well with the uncomfortably long pauses between songs, because both detracted slightly from the performance.

Martinez closed the show with three songs from her previous album “Crybaby,” but surprisingly did not close with the, arguably, biggest songs from the album, “Crybaby” and “Pity Party.” Instead, Martinez sang “Sippy Cup,” “Alphabet Boy” and “Mad Hatter.”

The final song of the night was “Fire Drill,” which plays during the credits of the “K-12” film, perfectly tying up the end of the concert with the end of the album.

“K-12” the album is available on all major streaming services, and the film is available to Music Premium subscribers on YouTube.