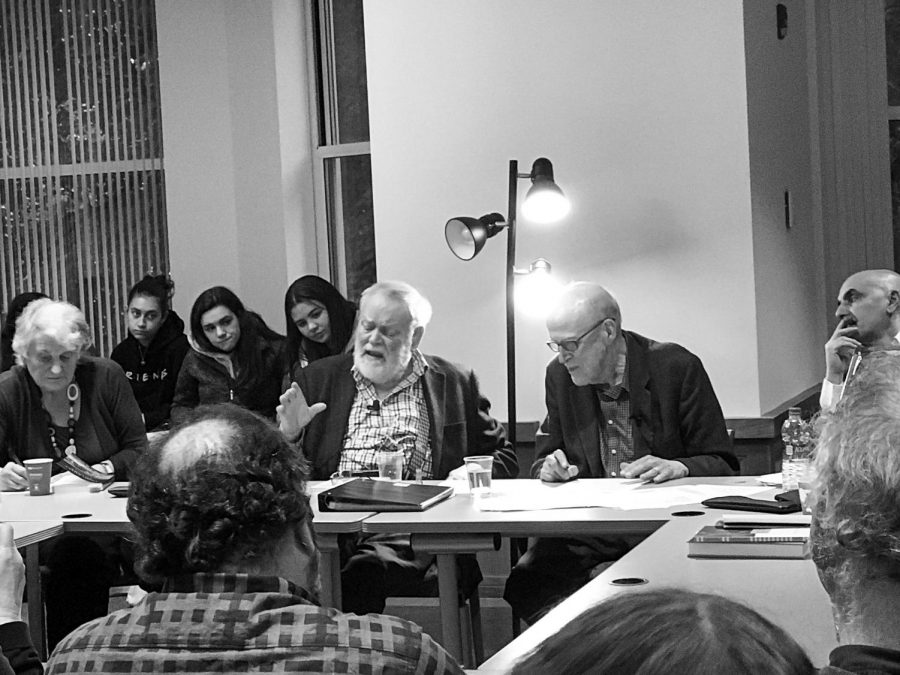 Poets Michael Longley and David Ferry inside the Poetry Center on Oct. 10 reading excerpts of famous literature to the audience

Two highly respected poets, Michael Longley and Suffolk University Resident Professor David Ferry made an appearance to give voice to their highly respected lyrical poems, translate the texts of ancient epics and discuss the immense value that simple lines can have in poetry.

Longley, from Belfast, Ireland, made a rare appearance in America with his wife, Edna, to read alongside Ferry. “This is a once in a lifetime event,” Professor George Kalogeris said.

Suffolk professors and members of the Boston poetry community sat with the two writers while the audience watched, packed together with barely enough standing room, to hear the masters of poetry speak about their craft.

Longley and Ferry are both experts in their field and are still actively writing in the later years of their lives. Ferry recently finished a translation of “The Aeneid” and boasts a collection of translations of Gilgamesh, Virgil and Horace, all highly revered and studied writers from the ancient world.

“Ferry has long had the respect of colleagues and poets: the Poetry Foundation awarded him its lifetime achievement award, the Ruth Lilly Poetry Prize,” Spencer Lee Lenfield wrote in an article on Ferry for Harvard Magazine. Ferry is most widely known for  his translations and poetry book, “Bewilderment.”

Longley has been publishing books of poetry since 1965 and has won numerous awards such as the T.S. Elliot Award and the Griffin Poetry Prize. Edna Longley, a revered literary critic, also participated in the readings.

The Longley’s began the event by reading the poetry of Ciaran Carson, a fellow Irish poet who had passed away just days before and whose funeral was taking place at the same time as the event. The readings of the late poet were read with both humor and quiet consideration to celebrate and honor Carson’s wit.

Kalogeris, who also helped organize the event, joined Ferry in reading his translations of “The Aeneid,” the ancient roman epic.

“The Aeneid” translation was nearly a decade-long project for Ferry.

Ferry and Longley read passages from Ferry’s “Epic of Gilgamesh” to complete their readings of epics. Ferry’s lyrical and descriptive translations make the ancient texts understandable to the modern reader without undermining the integrity of the original writing. His descriptive imagery and understanding of the complex emotions of the characters mark his translations as notable examples amongst the others.

“This kind of translation almost needs a new name, to distinguish it from all the other worthy efforts to bring the ancient poets to life: it is an iteration, another version, but also—perhaps, almost—the thing itself,” April Bernard said of Ferry’s “Aeneid” in her review in New York Review of Books.

During the question and answer portion of the event, Longley and Ferry reflected on their views of poetry.

“A reverend once said to me that poetry is the voice of god,” Longley said.

“I would say it is mostly lines,” Ferry added in reference to the form in which poems follow.

“And I would have to agree,” Longley replied jokingly.

In response to an audience member’s question, Ferry compared meter to the complexity of jazz beats. He spoke on their underlying patterns and the poet’s tendency to improvise their own unique variations on those patterns. Words and syllables are much like the notes and keys played by a musician, which is why poetry spoken is so similar to a performance, according to Ferry.

“I knew I wanted to spend my life talking about lines of poetry,” Ferry said once he had finished describing his theory on poetry line and music.

Longley then humorously discussed the origins of their own poems and the great poems of history.

“If I knew where poems came from I would go there,” Longley said.

Guests were then given the opportunity to purchase books from Longley and Ferry and have them signed.

Editor-In-Chief of Suffolk University’s student literary magazine, Venture, Jackie Janusis, was impressed with the success of the event.

“It was interesting to witness two different writers able to relate their work so well to one another,” she said.  “I think it was a reminder that practice of your own writing can create great success.”

While Longley will return to Ireland within the next few days, Ferry will remain as a resident professor in the English department, spreading his wisdom and sharp humor to aspiring poets and creative writers at the university.