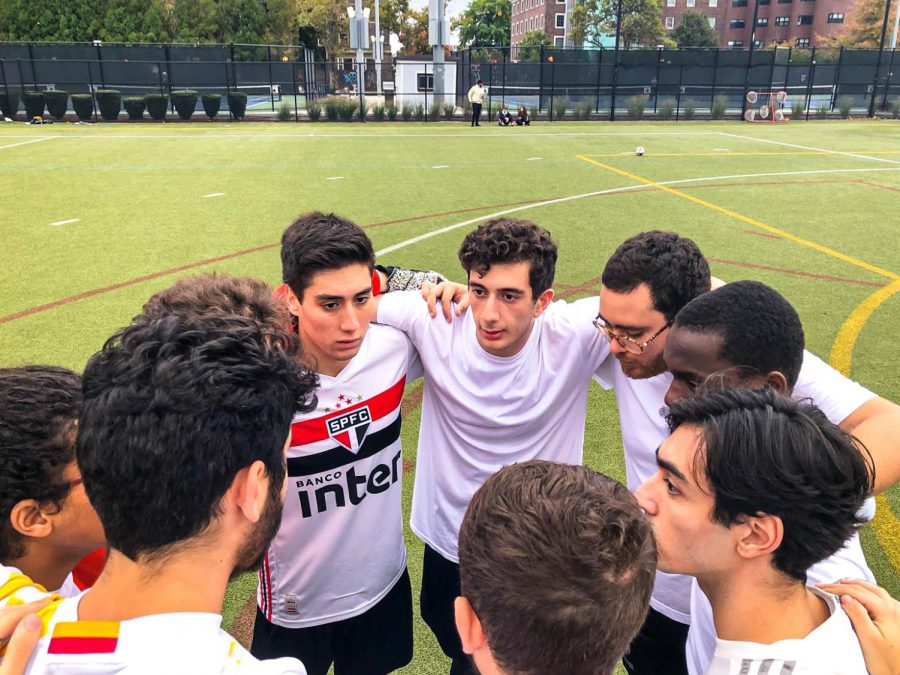 Club sports have traditionally been on the back burner at Suffolk University, but one group of passionate students is out to change that.

The Suffolk Football Club is one of the newest organizations on campus, and are already making a huge splash. While the club has only formally existed for about three weeks, the club’s Instagram has well over 400 followers, its member group chat has over 120 members and over 30 people are consistently attending events.

The men’s team has already had three scrimmages, including last Saturday’s 2-1 win over UMass Boston. But it wasn’t all glory up until this point by any means.

The club’s “founder” Fehr Almehdar (or “Fehrrari” to his teammates), started this process his freshman year.

“[I] started about four or five years ago grabbing signatures to start this soccer club, cause SLI [Student Leadership and Involvement] told me you can start whichever club you want, and that’s an amazing idea, and when I went to do that, I got denied,” said Almehdar in an interview with The Suffolk Journal. “It didn’t work because they said varsity is looking for players and this would be infringing on them. I kept trying to make it happen for years and it didn’t work out.”

According to Suffolk, SLI is currently in charge of 80+ clubs on campus. In his second year as the Associate Director of SLI, Casey Mulcare helped assist Almehdar in forming the club. Mulcare said in an interview with The Journal that because of limited space on campus getting clubs off the ground right away can be tricky.

“The conversation was never that this was not going to happen,” said Mulcare. “We want to support as many new clubs as possible.”

His persistence would eventually pay off. For the next four years, Almehdar continued to work towards his goal. He drafted the constitution and had the people for an E-board. At the beginning of the current semester, he again found himself in SLI asking if a soccer club could actually happen. Mulcare put Almehdar in touch with Sadiq Sheikh and Lauren O Comeau, who had also been attempting to put a soccer club together on their own.

“It was like three presidents sitting together at a round table, all wanting the same exact same thing,” said Almehdar.

Mulcare later introduced Vu Tram to the table, who became the fourth “president”.

All of this work has led to a club that means the world for some. Almehdar estimates the current club members are almost 95% international students, with over 50 countries represented.

“When we are abroad, when we are not with our family and we don’t have any connection to our roots and nothing to hold on to, it’s always been football,” said Almehdar. “We grew up with [the] ball at our feet.”

With the large amount of international students in the club, comes lingual diversity. Almehdar says that this factor brings the club closer, rather than creates language barriers.

“You hear every single language, and it’s the common tongue because we all understand what they’re saying, because when it comes to football you just know. It’s something that really brings us together,” said Almehdar.

Besides bringing a sense of home to America for many of these international players, the club also serves as a second family.

“Being a part of this team has made me feel like I belong somewhere, that I’m wanted somewhere, and that is the greatest gift I could receive,” said club member Alvy Xavier.

Some players found a home in this club out of the ashes of defeat.

“I remember when I tried to audition for the Suffolk team, and I remember how I was rejected but it all gave me strength and we managed to create something gigantic,” said goalkeeper Felipe Tomicioli Giesteria in an interview with The Journal.

Giesteria, along with freshman Mo Zaidan, were named captain for the game against UMass Boston.

“I pass around the [captain] armband to give a chance for people to step up,” said Almehdar.

With a lack of club sports at Suffolk, members are grateful for the opportunity to stay active while playing a sport they love.

“I enjoy this club because it gives us students an outlet to compete physically at a time when many of us have lost that aspect from high school,” said Abhy Patel to The Journal.

While the club has existed for less than a month, they already have the schedule and assets of a well-established organization. They typically meet three days a week for pickup games with training sessions occurring prior to those games.

To ensure the players are prepped for game day, manager and sophomore Micheal Tseytlin runs a variety of drills and warmups to make sure everyone is healthy and prepared. The clubs’ outreach can be attributed to its PR representatives CJ Koch, Reema Fayez and Marianne Sirgy. Sirgy and Fayez run the club Instagram, and can be found on the sidelines of every event.

The club’s finances are managed by sophomore Mohammed Ammar. In terms of the money Ammar has to work with, Almehdar said that they were only granted $224 of the $1000 they requested from Student Government Association (SGA). To offset this, team members are bringing their personal equipment to use at games and practices.

“Our financial officer worked relentlessly to make a reasonable and cheap request, he really went above and beyond in the proposal, I have a deep respect for the SGA’s finance committee, but I really think they dropped the ball on this one,” said Almehdar regarding the situation.

While resources are limited, the players still have high praise for Almehdar and the rest of the leadership.

As an international student living in Boston, Almehdar said that Suffolk lacked opportunities for students like himself to play the game they grew up playing. In addition to creating such an opportunity he “really wants to start something where everyone feels at home.”

“Everyone here has a struggle of their own, their own struggle. But out there on the field all that matters is one thing, our passion, a shared love for it unites us, the beautiful game has an amazing way of bringing our family together, it’s much more than a club,” said Almehdar.

This club is bringing a new age of sports into the light at Suffolk, and they encourage anyone that wants to connect with them to go to their Instagram @suffolk_fc.