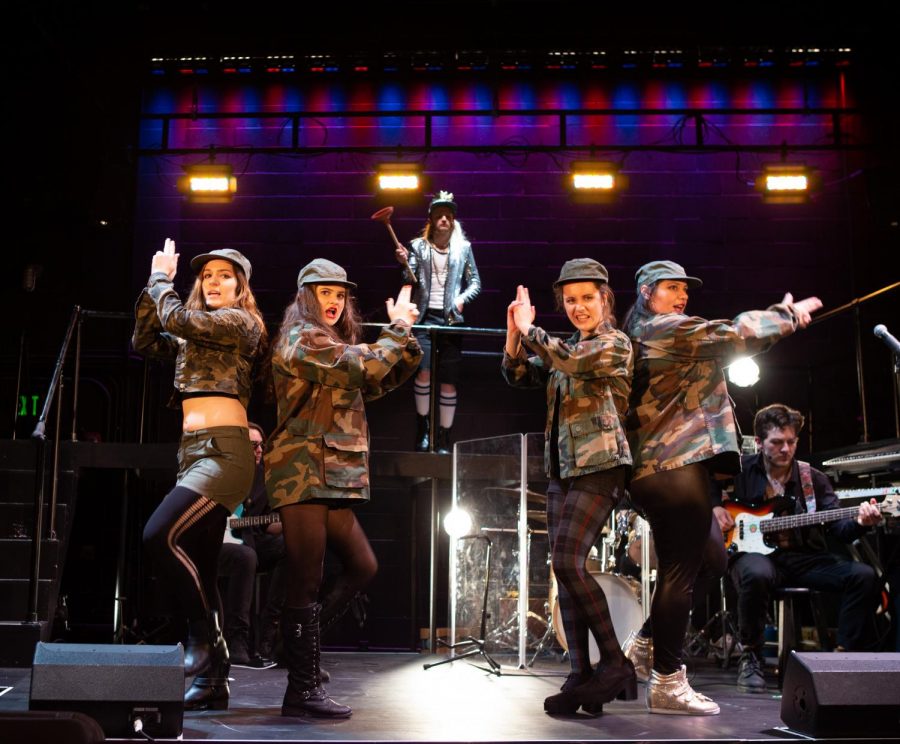 Suffolk University’s Modern Theatre was transported to Poland last weekend, as the play “Ubu Roar” filled the venue with humor and laughter.

This production was directed by Suffolk Theatre Professor Wesley Savick, and was put on by the Juvenila Theatre Company and the National Theatre of Allston. The immersive show had been performed by the theater company earlier this year in May, but was brought back this fall with more rehearsal time.

“Ubu Roar” follows Mr. and Mrs. Poops as they rise and fall from royalty. The plot begins when the main character Mr. Poops comes barreling through the audience proclaiming, “Don’t worry, I’m here!” There is no context for the audience to base this proclamation on, but the audience seemed amused. The main characters are seen going through all sorts of obstacles in their pursuit of the throne, which eventually turns Mr. Poops into King Poops. When fame goes to their heads, the characters go to war and end up giving up their seats of power.

Actors dared to break the fourth wall during the show by interacting with spectators and making them a part of the show. The characters were constantly referring to and talking to members of the audience. At one point, King Poops talked to the audience as if they were citizens in the kingdom, then proceeded to pass out pudding cups to win them over.

Some bright spots of the performance included the women soldiers who help Poops on his rampage to keep the throne and their short, comedic song that had the audience chuckling. The show did a splendid job of introducing media and film in the play, such as the play’s setting being displayed over the main stage throughout the show.

Instead of traditional theatre seating, audience members sat at tables with snacks and drinks available. The show’s take on dinner theatre made the audience feel as if they were in a lounge or open mic rather than a formal performance. The dinner theatre aspect added to the play because it created a relaxed atmosphere.

The engaging set design featured one stage behind the audience and one in front of them, which changed throughout the show. At some points, the actors and actresses even stood on tables where the audience was sitting and performed on those as well. The characters kept everyone on their feet because they never knew which actor was going to pop up where.

The show also starts with a concert-like feel featuring a live band. Senior theatre major and sound designer Samantha Noto describes it as, “part rock show and part theatre.” The live music was definitely a cool element of show, and the band members also contributed some acting and characters to the plot.

The Juvenila Theatre Company, which is made up of Suffolk alumni and current students, put on the performance. Noto explained more about the new company in an interview with The Suffolk Journal.

“Wes Savick started Juvenila to get the alumni of the Suffolk Theatre Department involved in theatre after they graduate,” Noto said. ”He hires mostly alumni so that they can get their acting careers going and designers and technical people as well.”

“Ubu Roar” ran at the Modern Theatre from Sept. 19 – 21, and Sept. 26 – 28. The Juvenila Theatre Company has more shows planned, but has not yet officially released a line up.