Suffolk cheer club continues to make a name on campus 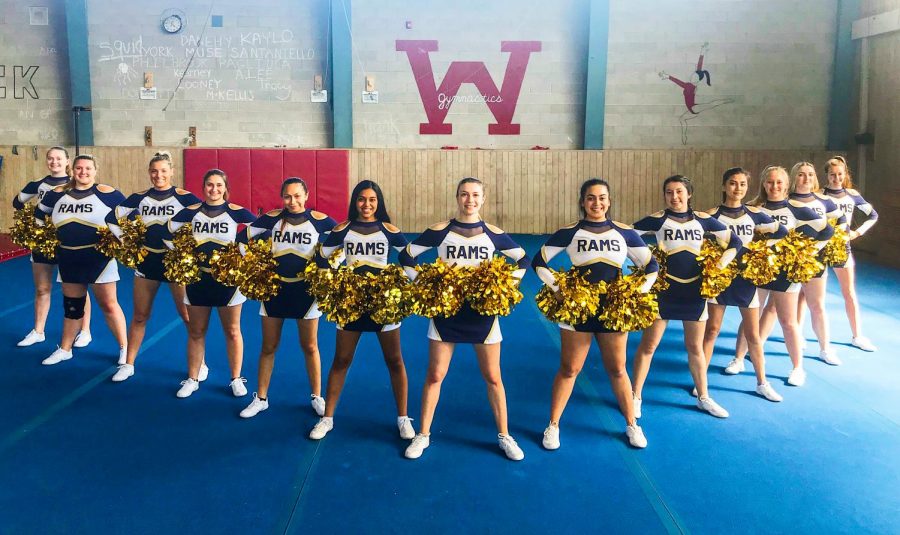 The Suffolk University Cheer Club scored an impressive 82 out of 100 points and placed first in their division at their competition at Pinkerton Academy in Derry, New Hampshire on April 14.

This score allowed the women to receive a placement, not a bid, for The U.S. Finals Cheer and Dance, which takes place in Virginia Beach in early May. Since they did not receive a bid, which provides financial support for teams looking to compete at the Finals, they will not be able to attend the competition this year.  Instead, they will be focusing on fundraising and refining their already Finals-qualifying score.

Although the current team is new, this isn’t the first time Suffolk has had a cheer club on campus. Suffolk University Varsity Club was founded 60 years ago in 1948, but slowly faded until it officially dissolved in 2010.

Suffolk’s current Cheer Club was formed in 2016, when they spent most of the year building a solid foundation and finding their current coach, Tainara Giacomini.

While the women refer to themselves as a team, since they are not recognized by Suffolk Athletics, they are technically a club.

In a recent interview with The Suffolk Journal, Giacomini spoke about the progress the club has made in the past few years as they continue to grow and develop their presence on campus.

“A lot of the team is freshmen but they all had cheerleading experience so I didn’t really have to teach the basics to anyone,” said Giacomini. “This year we were able to focus more on fundraising and team bonding, instead of teaching. This time around I had a crew that knew what the commitment was and what cheerleading entailed.”

They competed for the first time during the 2017-18 school year, as well as cheering at some of the basketball games. This year, they became more consistent with cheering for the men’s basketball, as well as attending one of the men’s hockey games and cheering alongside Emerson College’s team.

Some of the returning members, including President Briana Zwicker also spoke about the differences they have seen in the past three years.

“Obstacle-wise, this year doesn’t compare to the last,” said Zwicker in an interview with The Journal. “For each year and for next year we’re at least pre-planning and our e-board is full this year, it’s never really been full or sturdy like that because people are coming and going, and this year we have girls that know going into next year what to expect. We work really well together and we know each other’s jobs so we all help each other out.”

Although the social aspects of the club have improved, the Cheer Club’s practice situation still has not improved. Since the club is still considered a club under the Student Leadership and Involvement office and not an official athletic team, they rent out classrooms for practices, instead of using the Ridgeway gym like most other teams.

“We travel to Wakefield and use their high school facilities because they have the actual gymnast mats that we’d compete on,” said Zwicker. “Practicing in a gym and a classroom doesn’t cut it.”

The club is able to use Ridgeway, but must rent it out for each hour they use, and there’s only one mat the women can use to practice their stunts, tumbling and jumps.

“We are funded but it’s just not enough because every time we go to the Suffolk gym it’s $100 an hour, so it really adds up,” said Ali D’Arcangelo, treasurer for the club.

The club also does not have access to many of the resources the athletic teams at Suffolk have.

“We also don’t get the vans, so that’s another thing we have to deal with now,” said Zwicker. “We have to Uber people back since they won’t give us the vans because we’re not a sport.”

Despite this, the club still looks to continue bringing school spirit to Suffolk.