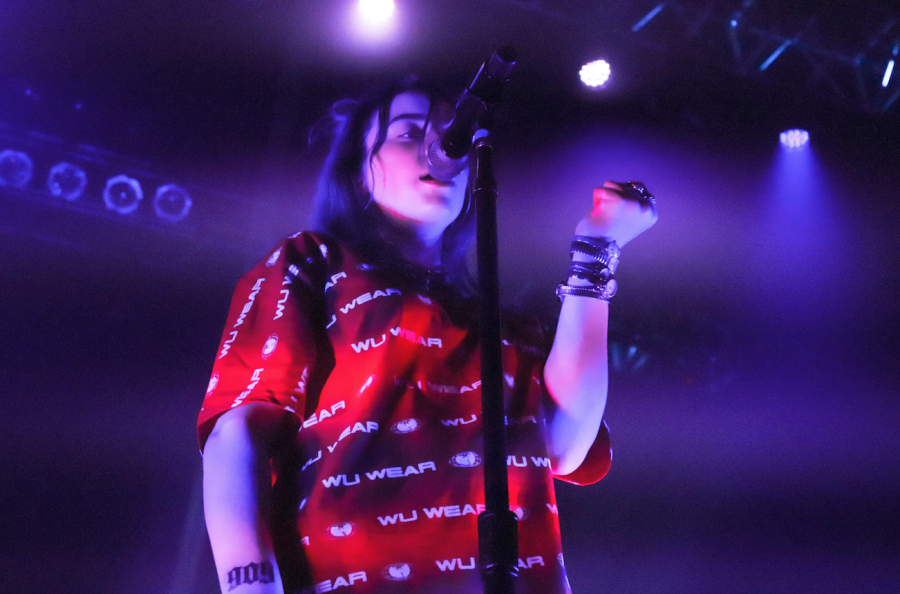 Billie Eilish performing at Boston’s House of Blues in November

After weeks of anticipation and lots of teasers from her social media accounts, Billie Eilish finally released her long-awaited debut album “WHEN WE ALL FALL ASLEEP, WHERE DO WE GO” on March 29. Eilish, a 17-year-old Los Angeles native, has slowly been making a name for herself in the music industry over the past three years since the release of her first single “ocean eyes” at the age of 14. Her music has been climbing the charts ever since.

Eilish confirmed the new album in early March of last year in an interview with Enfnts Terrible. The countdown to its release began with her first two singles, “you should see me in a crown” and “when the party’s over,” in summer and fall of 2018, respectively.

The album starts off with “!!!!!!!,” a 14-second track that plays audio of Eilish taking out her Invisalign braces and announcing the start of her album.  This track, comedic in effect, is a reminder of just how young Eilish is, allowing her to be the goofy teen before diving into the songs.

Eilish’s older brother, Finneas, takes production credit on all tracks. He and Eilish worked side by side to also helped in produce the album’s first song “bad guy.” The siblings also both take credit in writing the lyrics behind the whole the album, according to Billboard.

Eilish’s tracks tend to flip between bass and synth-heavy songs, to slower, more melodic songs. The second song on the album, “bad guy,” features a heavy bassline, a touch of auto-tune and a synthesizer melody, reminiscent of songs of her EP “don’t smile at me.”

The album ends with the slow melodious track “goodbye,” which heavily relies on Eilish’s famous breathy vocals.  The lyrics incorporate memorable lines from multiple songs off the album like “Bite my tongue, bide my time,” “I’m the bad guy” and “Don’t you know I’m no good from you,” cleanly wrapping up Eilish’s freshman record.

One of the interesting things Eilish did alongside the release of her album was the simultaneous release of the “Billie Eilish Experience” on Spotify.  The “experience” has a 21-second-long introduction video that segways into her entire album. It also features a behind-the-scenes music video for “bad guy” and the four singles released prior to the album’s release, including “bury a friend,” “wish you were gay” and “when the party’s over.”

Eilish spoke to Billboard about her journey with synesthesia, a condition where some of her senses are linked together.

For Eilish, her hearing and vision are linked, meaning that when she hears sounds, she sees colors at the same time. This may be the reason why so many of Eilish’s music videos, outfits and even hair feature such vibrant colors.

“I wanted to take my synesthesia and give it to the world and show everybody what it feels like,” said Eilish.

Overall, Eilish’s album delivered exactly what fans were hoping for; a collection of goth-pop, electronic songs to scream at the top of your lungs and hauntingly beautiful ballads for when listeners crave a goosebump-raising song. This is only the tip of the iceberg for Eilish, as she is still just beginning to build a musical empire that will last for years to come.

“WHEN WE ALL FALL ASLEEP, WHERE DO WE GO” is available to stream on all major music platforms, and Eilish kicks off her sold-out world tour in San Francisco on May 29.