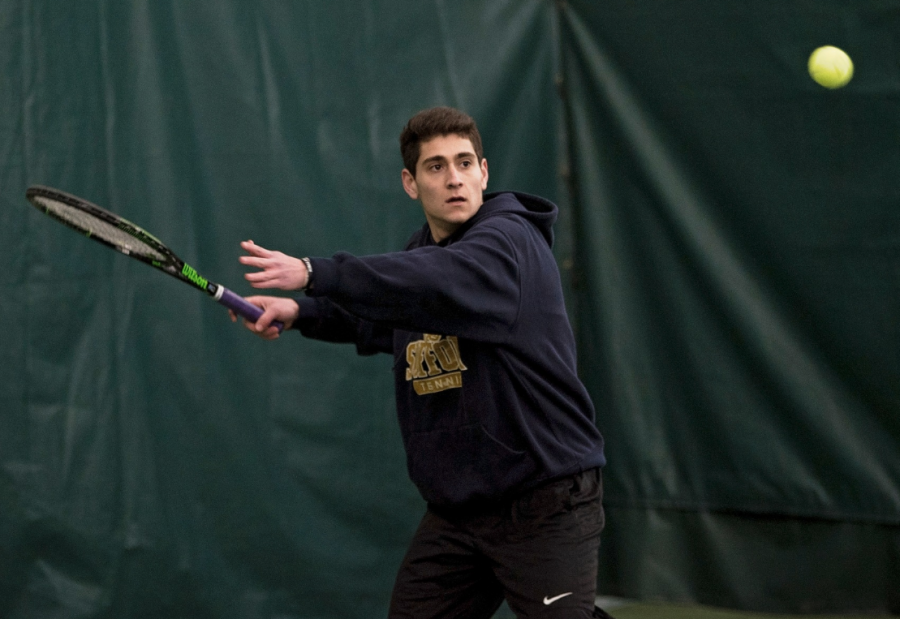 After a 1-3 start to the new season, the Suffolk University men’s tennis team will be looking to turn their season around. The team will be spurred around senior captains Rami Esrawi and Chris Parnagian who are in their final seasons.

The Rams took their first step towards that turnaround, winning their match Tuesday against Albertus Magnus College.

After a 6-7 2018 campaign, the Rams were looking to expand on a record that hardly landed them under the .500 mark. This spring, after three straight losses to begin the year, the hopes of that from an outside perspective may have begun to dwindle, but Esrawi still has confidence that they will spin it around.

In the eyes of the fourth-year veteran, everything will begin to fall in place after that elusive first win.

“Over the weekend we saw improvement, but 0-3 was still 0-3,” said Esrawi in a recent interview with The Suffolk Journal. “Getting a win will give us confidence and get that monkey off our back. Getting that first win is the hardest part, especially when we have a young team. We need to stay positive and it will come.”

Parnagian, another fourth-year player, had similar thoughts about how the dominoes will fall as the season progresses.

“Having a 0-3 start isn’t ideal,” admitted Parnagian in a recent interview with The Journal. “I think that once we get into the groove of playing and practicing each week, we will get some wins and push through.”

One aspect of the struggles that the Rams have endured thus far is due in large part to losing their No. 1 player last year, Ariel Russo. Russo was a perfect 8-0 in singles play last season and provided stability at the top of the roster.

With the loss of a strong talent at the top of the roster, the Rams have no choice but to adjust accordingly and make up for what he provided to this team.

“Filling his shoes is tough,” said Esrawi. “In order to make up for losing such a talented player, everyone must bring their game to the next level, especially Chris and I. Our contributions from top to bottom are important to our season and I am confident in our guys this year to get these important victories.”

In a roster of 10, five players are underclassmen, meaning players like Esrawi and Parnagian will need to guide their inexperienced teammates if they want to make up for a gap left by Russo.

Knowing this full well, Parnagian is doing the most he can to help his younger counterparts before he steps off the tennis court for the final time while wearing a Rams jersey.

“Being a senior, I plan to prepare our younger players as much as possible before my time comes to an end,” said Parnagian. “Having encouraging mentors is the biggest asset a player can have. From four years of playing at Suffolk, I think the greatest thing I can teach is perseverance. As long as you enjoy the experience and at the same time challenge yourself while demonstrating growth.”

The Rams will look to continue pulling out wins, as they will face off against the University of Massachusetts, Boston on Thursday.