Yasir Batalvi: A campaign of positivity amidst a history of controversy 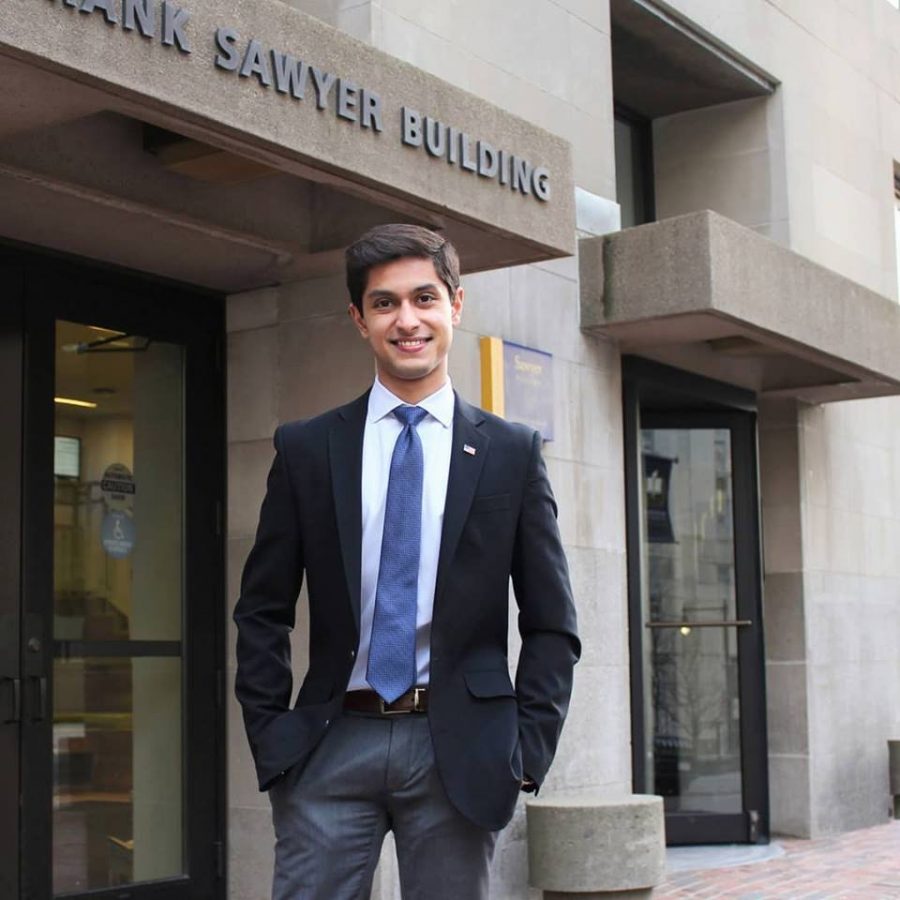 Yasir Batalvi, Class of 2020, is a two-term Student Government Association (SGA) senator for the Class of 2020. He also served as SGA vice president before resigning in February 2018, and hopes to finish his tenure at Suffolk as SGA president.

“I believe I have the experience, the vision, and the platform to be able to make real change at Suffolk,” said Batalvi at a SGA candidates forum Thursday.

Batalvi, who is from Toronto, majors in government with a concentration in law and public policy. If elected SGA president, Batalvi hopes to foster a stronger sense of transparency at Suffolk through his written proposal to create an ombuds office at Suffolk.

An ombuds office offers independent and impartial mediation for conflicts between students, organizations, faculty and administration on campus. It could also address grievances, explain policies and report on systemic issues in the university that may not be officially identified otherwise.

“It is a way for the university to make sure that we’re keeping ourselves honest,” said Batalvi in a stump speech at last week’s Suffolk Democrats meeting. “They have the independence to hold people accountable from the top down at the university.”

Batalvi also looks to create a designated student center on campus. He said the Ridgeway building, which currently houses SUPD, Campus Card Services and Suffolk’s gym and basketball court, could turn into this.

“[A student center] would create one centralized location where students would know there are no classes there, there’s a place they can hang out and it helps in numerous ways,” said Batalvi in an interview with The Journal. “If there’s a basketball game going on, students are already at the student center and they are so much more likely to go to that basketball game.”

Batalvi wants to make it mandatory for all professors to record their lessons and for Suffolk to start using free or open-source textbooks. In order to promote environmental sustainability, Batalvi wants the dining halls to use real utensils and plates, Suffolk to grow its own produce and the campus to recycle more. He also hopes to enhance the quality of food, meal options and the service of Sodexo, Suffolk’s food services provider.

In his time in SGA, Batalvi said he helped greek life gain more office space and played a major role in developing Navigate, a mobile app for Suffolk students that shows students their courses and different ways to connect with various areas of the university.

Batalvi has also seen controversy while in SGA.

Over the course of the 2019-2020 SGA election season, Batalvi has said he resigned from the vice presidency due to disagreements with decisions made by Daniel Gazzani, last year’s SGA president who has since graduated.

“Without having to focus on what I saw as poor, unconstitutional decisions made by an administration that I just couldn’t support serving under, I think that what’s important is to do what’s right and the choice I was faced with was a difficult one,” said Batalvi in response to an audience member, who asked him why he resigned, at the Suffolk Democrats’ stump speech event last Tuesday.

Batalvi did not say what these “poor, unconstitutional decisions” were when asked to clarify this statement in an interview with The Journal.

“The personal choice that I made was to do it quietly, and obviously not in the sense that people didn’t know about it, people did, but not try to cause controversy around it,”  said Batalvi in response to the question. “You can [resign] in a way where you burn bridges and you create a lot of noise, but at the end of the day, that undermines the organization and it undermines, I think, the institution.”

In a comment on a former SGA senator’s public Facebook post that condemned Batalvi’s resignation, Gazzani said Batalvi resigned because he “[was] not meeting the basic standards and expectations of the position” and “Impeachment was also an alternative being discussed.”

Gazzani declined to comment when asked by The Journal to explain what standards he said Batalvi failed to meet.

Current SGA President Morgan Robb, who was SGA’s secretary at the time of Batalvi’s resignation, said in an interview with The Journal that “officially, there was no movement of impeachment. There was no discussion of it.”

“I think that this is essentially a concerted campaign of disinformation,” said Batalvi to The Journal, referring to Gazzani’s comment. “It’s very hard to prove a negative, it’s impossible to prove a negative, but I can tell you that [impeachment] was never on the table.”

According to the Student Judicial Review Board’s (SJRB) ruling on Team GRIT’s violation of SGA election rules during last year’s election, multiple members of SJRB said Batalvi had contacted them and asked for confidential information pertaining to GRIT’s hearings. Batalvi’s involvement in the situation was never appealed and only discussed in SJRB hearings.

GRIT was a group of SGA e-board candidates who looked to get elected by running as one team last year. SJRB said one member broke an election rule and because the other members knew of her action and failed to report it, they were all disqualified.

“We were made aware that Yasir served a role similar to that of a campaign manager to Logan and the other members of Team GRIT,” said SJRB in the ruling. “Multiple members of SJRB came forward to disclose that Yasir Batalvi had contacted them and, in varying degrees and methods, attempted to gain information that was discussed behind closed door meetings. For example, asking for information as to questions that will be asked in a hearing is not appropriate. Not only is this inappropriate behavior from a previous Vice President of SGA, it is also an attempt to violate the confidentiality clause.”

Batalvi said that although he is close friends with GRIT member Logan Trupiano, he was never GRIT’s campaign manager, nor did he fill an unofficial role that was similar to one. He also said that he did not interfere when SJRB was trying to have a closed door hearing and investigation to figure out what happened during the election.

“Let me put it this way, to ask someone ‘how is the hearing going?’ is not to ask anyone for confidential information,” said Batalvi to The Journal. “That’s the extent of what I would have asked anyone on SJRB. You have to understand, I was speaking out about, very vociferously, about how they were mishandling the process.”

Last year, Batalvi condemned how the election had been handled by SGA’s e-board and then-vice president Levi Smith, who had assumed office in a special election after Batalvi’s resignation. The SGA 2018-2019 election results had been withheld for a week after the election took place due to a technical error in the voting system, which Batalvi said violated SGA election rules.

Batalvi said he asked Gazzani to remove the section about him from the SJRB ruling.

“To take a regular student, [Batalvi] and to name them, that to say that somehow that, you know, I was doing something that was against the rules, I think was their attempt to get back at me somehow for basically what I was doing, which was making sure that the process was followed fairly because that’s something that I can assure is what I was doing,” said Batalvi to The Journal.

Batalvi said he had nominated every member who was on SJRB during last year’s election while he was vice president, as SGA’s vice president is the chair of SJRB. He also said he attended every SGA meeting after he resigned.

“After that election, I think that there is some type of picture that’s being painted as if I gave up or didn’t show up,” said Batalvi at the SGA candidates forum. “But I was there every week. I was just sitting on the other side of the table, with the senators of SGA.”

Batalvi spoke out on several issues at the SGA meetings following his resignation. This includes his call on SGA to move to a vote of no confidence in Vice President Smith after Batalvi said he had not been adequately involved in the SJRB hearings about the election, as Smith had recused himself as chief justice for SJRB during these hearings.

Smith lost to Batalvi for SGA vice president in 2017. During that election, e-board candidates wrote campaign messages on the whiteboards in the Sawyer building’s lobby, including Smith.

Smith’s message showed a bulleted list of his qualities that each had a checked off box next to it. During the election, Batalvi posted a clip of the whiteboard on his personal Snapchat that showed a new addition to the list; a check off box with “copies Yasir” next to it.

Batalvi said to The Journal at the time that he should not have posted the clip and later deleted it. He also said what was posted to his Snapchat did not endorse the message that was shown and his Snapchat account is personal; only his Facebook, Twitter, LinkedIn, Pinterest and personal website were being used for campaigning.

“It’s Levi making an issue on the election,” said Batalvi to The Journal at the time, referencing a Facebook post Smith had published about his disappointment in Batalvi over the situation. “If anyone is making this campaign negative it’s Levi.”

When asked about it again by The Journal during the current election, Batalvi said his views had not changed on the situation and that it was a non-issue.

At the SGA candidate forum, every e-board candidate was asked to give an example of a time where they were criticised or made a mistake, how they handled the situation and how they learned from it.

“I’m going to answer it this way, in a very relevant way,” said Batalvi in response. “I’m no stranger to criticism, and that’s true when you have a record, when you care about something, when you work hard, and when you stand for something, a lot of times what happens is you ruffle some feathers and that’s part of what I’ve always believed in doing.”

Batalvi was the only candidate who did not give a specific example of a time when he was criticised.

“Part of me running the campaign that I am running now is that it absolutely needs to be one that’s focused on what I can provide for students,” said Batalvi in an interview with The Journal. “It needs to be focused on positivity because too often we get caught up in the negativity that I think SGA can sometimes foster on campus.”