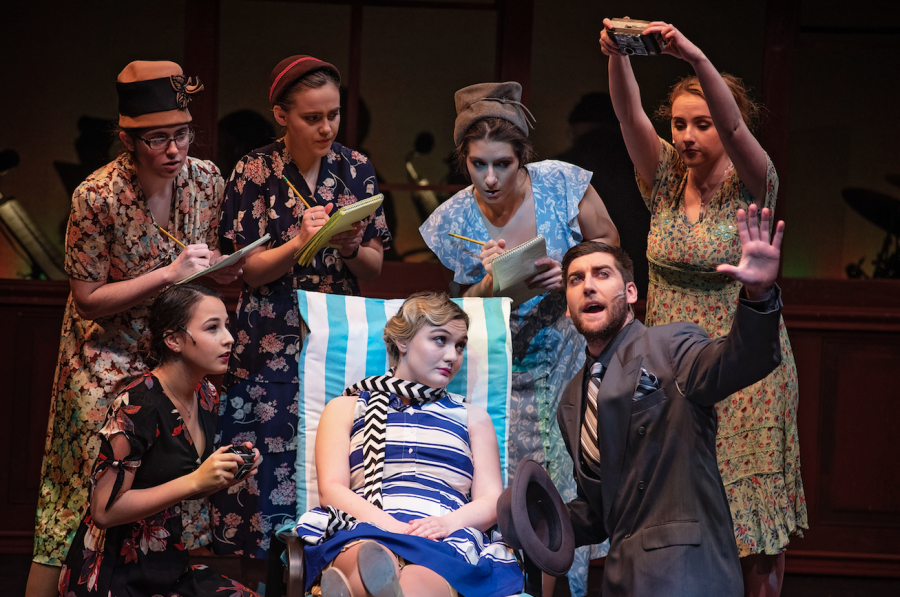 “Janet,” played by Alice Bryne, “Feldzieg,” played by Logan Ausmus and members of the ensemble.

The Modern Theatre was taken back in time to the roaring 20’s as Suffolk University’s Performing Arts Office (PAO) put on three performances of “The Drowsy Chaperone,” a musical set inside a comedy, over the weekend.

This production takes place inside the living room of a nameless man, hereby referred to as The Man in the Chair. The story follows him as he gushes over the soundtrack of his favorite musical, ‘The Drowsy Chaperone.’ Although he admits he has never seen the show in real life, he can vividly describe what is happening on stage during each song as he plays his beloved vinyl record. As ‘The Drowsy Chaperone’ record plays, the man introduces the audience to each character and their actor, giving explanations of what is happening in every scene and bringing the audience through a story about a wacky wedding day gone wrong.

From gangsters disguised as pastry chefs with thick Italian accents to a superstar who puts on over-the-top musical numbers despite claiming that she wants to remain out of the limelight, the eclectic group of characters each had their own distinct personalities and added unique layers of humor.

One of the most impressive actors in the cast was freshman Mason Lafferty, who played the Man in Chair. Whether Lafferty was center stage with lights gleaming down on him, or tucked away in a dark corner, he was constantly in character. He bounced up and down in excitement whenever his favorite parts of the show came on the record, making sure to mouth along to every tune or line.

Regular theater attendees could easily relate to Lafferty’s character. The constant breaking of the fourth wall during the show were reminiscent of a friend showing you their new, or old, obsession, which was exactly how the show felt. Whether it be his extensive knowledge about his favorite show or the intense hatred of being interrupted by a phone call or knock on the door while being immersed in it, Lafferty easily portrayed the musical fan inside every audience member.

A strong voice within the musical was senior Kiley Soulier, who played The Chaperone. From when she sang about alcoholism behind a thinly-veiled rousing number or seduced her latin lover, her strong vocals led the musical and Soulier gave her all during her last performance with the PAO at Suffolk.

Alice Byrne, who plays the lead, Janet, in the in-story musical, was another strong voice, belting out her notes as a true star-on-the-rise should. Byrne and Soulier effortlessly portrayed their diva/rising star relationship.

The set was simple, yet functional. The recliner set up next to the record player for the Man in the Chair did not detract from the story of ‘The Drowsy Chaperone,’ nor did the refrigerator that served as a way of entering and exiting the stage. The backdrop for the in-story musical was three empty window panes set above a half wall, allowing the audience to see the orchestra pit as they supported the cast through their numbers without distracting from the musical itself.

The killer lighting design by assistant stage manager Adriana Cano and light crew Paige D’Ambrosio superbly complemented each scene. For example, when Adolphp lustfully entered the room and made women swoon, the stage was drenched in red light. When Janet and her groom, Robert, shared a sweet kiss, heart-shaped lights glimmered behind them, creating the illusion of glistening stars on a warm evening.

Although this was only the first or second performance at Suffolk for many of the cast and crew members, it was impossible for the audience to tell. The musical was beautifully executed with smooth costume changes and transitions between scenes. All of the performers appeared to be comfortable on stage and unafraid to act ridiculously silly in order to make the crowd chuckle.

“The Drowsy Chaperone” gave the audience a glimpse of Suffolk’s up and coming talent, making it clear that every actor has a bright future in performing arts at the university.