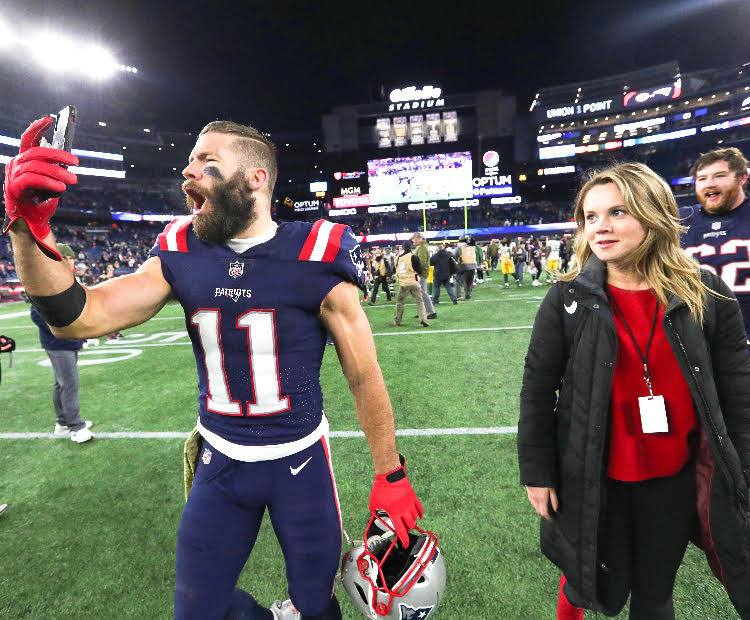 As a Suffolk University women’s soccer player, alumna Lauren Spencer went to the playoffs with her team for four consecutive years. Today, as the Social Media Coordinator for the New England Patriots, Spencer has experienced a whole new postseason.

Now in her second full year with the Patriots, Spencer has been fortunate enough to follow the team to three consecutive Super Bowls. Previously, she had interned with the team for a full year.

“It’s all I’ve known since I’ve been there,” said Spencer in an interview with The Suffolk Journal. “Every year has meant something different. The first one was totally overwhelming in a good way and just something I never expected. To now go through it a second time I’m just beyond fortunate. It’s pretty special and I’m truly lucky.”

This championship was especially meaningful to Spencer, as her father got to tag along to watch the game. She explained that he had also been there the year before, but was crushed after the Patriots’ 41-33 loss to the Eagles.

In a team of five people, Spencer has had the opportunity to be up close with players such as Tom Brady, Julian Edelman and Rob Gronkowski. Some of her tasks include coming up with content for their video teams and deciding what to write for certain captions and tweets.

Spencer graduated from Suffolk in 2015 with a degree in print journalism. After graduation, she moved to Nashville and did a full year Public Relations internship with the Tennessee Titans. In hopes of being closer to home, Spencer came back and decided to spend a semester in graduate school at Suffolk. While in school, she worked under Suffolk’s Sports Information Director Amy Barry.

Spencer said that her work with Barry prepared her for an internship with the Patriots that would then turn into an amazing full-time opportunity. As Spencer now travels alongside the Patriots to every game, she explained some of biggest daily responsibilities.

“I’m posting everything to all our major platforms which is Twitter, Facebook and Instagram,” said Spencer. “I’m just coming up with content ideas as far as what we’d like to see on each platform, what we can do for certain milestones players have coming up or game coverage.”

In her time at Suffolk, Spencer not only played soccer, but wrote for The Suffolk Journal and interned for the Boston Celtics. Spencer said that she’s grateful for all the connections she made at Suffolk and how she was able to branch further out to places past the Suffolk campus.

“A lot of my friends now, especially working in sports, had gone to major schools like Alabama and they have so much loyalty to their schools and their football teams,” said Spencer. “Although that would have been so fun I wouldn’t trade Suffolk for anything because of where it led me.”

As the Patriots came back home to a celebratory parade, Spencer found herself on a duck boat for the second time. She was overwhelmed with emotions as she saw the banner strung across Suffolk’s Sargent Law School congratulating the team.

“Four years ago I was there with my friends at the Patriots Parade as a fan. Now I have been a part of this for two additional wins on top of that. That part was super cool and made me thankful for the opportunities and where it all started.”

While her schedule is jammed pack, Spencer is also training to run her second Boston Marathon in April. Donate to her cause below, all funds supporting the Patriots Foundation: https://www.firstgiving.com/fundraiser/lauren-spencer-1/2019-Boston-Marathon