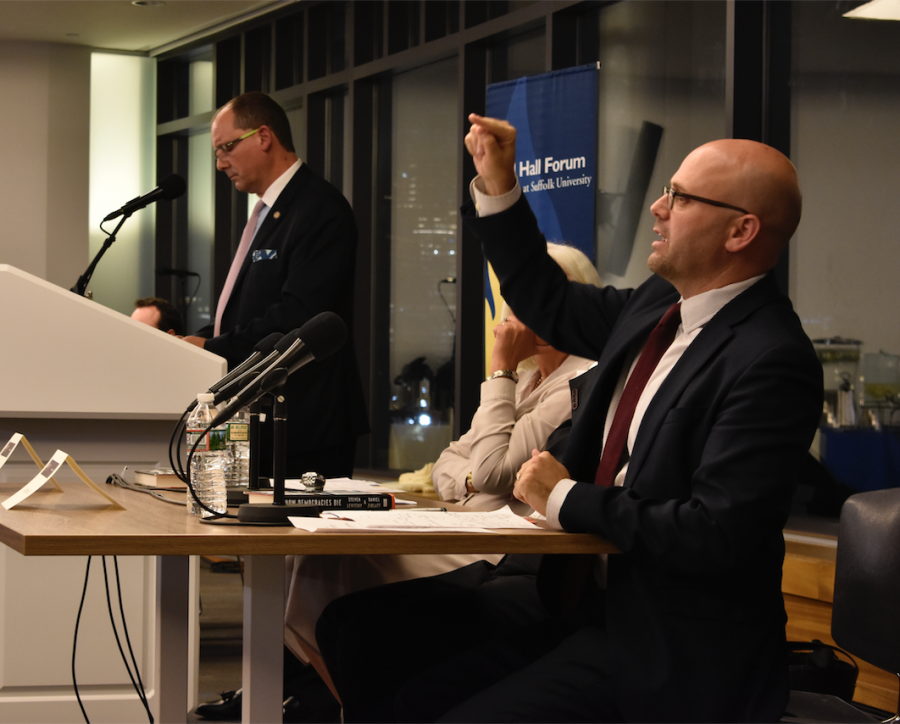 Harvard professor Daniel Ziblatt co-authored the book “How Democracies Die” and discussed his findings on identifying changing governments around the world at a Ford Hall Forum event on Thursday.

Ziblatt and his co-author Steven Levitsky lay out the political and historical contexts for identifying when a democracy is at risk in a country, drawing examples from Stalin’s Russia, Hitler’s Germany, Mussolini’s Italy and Hugo Chavez’s Venezuela among others.

Throughout all of these cases, the authors draw a clear similarity, where a country slowly and legally allows an “outsider” or “demagogue” to rise to power often by prioritizing votes over the protection of democratic values.

“Democracies don’t die like they used to. Three-quarters of democracy breakdowns during the cold war came around at the hands of men with guns. Contemporary democracies die in much more subtle ways,” said Ziblatt. “They die not at the hands of generals, but instead with elected presidents and prime ministers. Leaders who use the very institutions of democracy, to subvert democracy.”

Ziblatt continued by explaining how this decline in America came about as Democrats and Republicans began to undergo a change of hyper-partisanship in the early 1990s and continued into Obama’s presidency, and now into Trump’s. The results of this change can be seen in how legislators and presidents began to use the most extreme powers granted to them, like in executive orders or filibusters.

The breakdown of what Ziblatt describes as “unspoken rules” is a major threat to a democratic system.

“Constitutions work best when they are reinforced by unwritten rules, or norms. Our book focuses on two norms in particular,” said Ziblatt. “The first we call neutral toleration, or accepting the legitimacy of your political opponents. And the second we call institutional forbearance, which means to refrain from exercising one’s legal right, it’s an act of self-restraint.”

Several speakers during the event discussed how they felt partisanship works for and against America and how it has changed over the years. The book spent a lot of time on this issue, highlighting how in worst-case scenarios, partisanship becomes hatred between opponents.

“Polarization is around to the extent that it is because it works,” said Conley. “Polarization works for the Republican party because it mobilizes people. What a political party is, or used to be, is something that grabs you by the collar and actually yanks you out to vote. Parties don’t care about democracy, they care about winning.”

Fried disagreed with this concept slightly, harkening back to the opening lines of the United States Constitution, “We the People,” and reflecting on how separate that original “We” has become.

“That is our problem as a nation: we have not yet come to grips with the fractured ‘We’ that we are and really tried to solve that problem. And it is because that problem lies under the surface that different political movements can lay hold of it and manipulate it, and in this case, I fear it is a part of the unraveling the of our democratic equality,” said Fried. “The solution has to address the issue of the fractured We.”

The involvement of students in the effort to re-strengthen the country’s democracy was not understated by Ziblatt. In an interview with The Suffolk Journal, he said that the best way for them to begin to affect change is to “mobilize and vote.”

In an interview with The Journal, Richard Taylor agreed with Ziblatt, stressing the power of young voters and their ability to connect with one another. He suggested the use of social media as a tool for students to “galvanize others” in governmental processes.

Taylor went on to say, “I know that students have a lot of demands. They have school, family and sometimes work. But it’s very important as students, to get involved in the democratic process, even at the club level, and the school level. Because once you start getting involved, you carry that with you to the next level. And of course, vote.”

The event drew a large presence of students. Some particularly interested in Ziblatt’s book or the government and others who just wanted to get more involved in learning about the democracy they live in.

James Usovicz, a sophomore majoring in history, was drawn in by Ziblatt’s perspective on American democracy.

“I think that that idea of democracy as being a gift from our predecessors, but also a challenge for future generations to take on and to correct, was really striking. You know that it’s so fragile, and we have to be here to stand and protect it” said Usovicz following the event.

Usovicz also agreed with Taylor’s argument that students should keep taking small steps toward getting involved with preserving democracy, to assure their ideas are represented.

Ziblatt closed his statement by offering a new way of thinking about the changes taking place within our democracy.

“There’s often a sense that the crisis of democracy is something like global warming… but I want to propose an alternative analogy; the crisis of democracy is less like global warming, and more like an earthquake,” said Ziblatt. “Like with an earthquake, there may be deep and real fault lines that erupt from time to time. But the democratic crisis, like earthquakes, tend to come and go. The biggest challenge is to get through the earthquake with our institutions intact.”