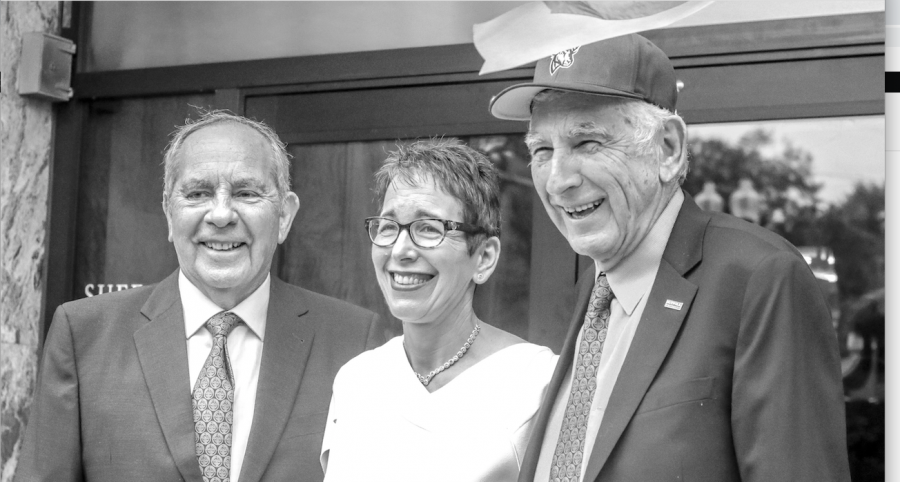 Just hours before the inauguration of Suffolk’s 11th president on Friday, a coach bus wrapped in the university’s logo rolled up to the entrance of the 150 Tremont residential building. The bus was filled with student athletes, the soon-to-be-inaugurated Marisa Kelly, and the Smith brothers.

Since graduating, the brothers found great success in the insurance industry and have been generous in donating to the university — $5.2 million, according to the university’s website. Their contributions have funded student scholarships and various athletics programs and facilities.

To recognize the Smiths’ generosity and dedication to the university, 150 Tremont, first opened in 1996, was officially renamed the “Michael S. Smith and Larry E. Smith Residence Hall.” A stone plaque outside the residence hall bearing the brothers’ names was unveiled during the ceremony.

The brothers credit Suffolk with their success, and hope their donations can help to provide current and future students with the same opportunities they received.

“[Suffolk] gave us a good education. If it wasn’t for Suffolk, I don’t think Michael and I would be successful. They gave me a basketball scholarship, otherwise I’d still be washing windows today,” Larry Smith told The Suffolk Journal.

The Smiths, originally from Chelsea, have also established a scholarship for graduates of Chelsea High School who attend Suffolk, in memory of their friend, Pvt. Sheldon R. Cohen, who died serving in Vietnam.

Sean Henry, a senior captain of the men’s hockey team, spoke during the ceremony on behalf of Suffolk’s athletes.

“It’s pretty incredible to think back on how much has changed since my first day at Suffolk, when I first started. We didn’t even have a gym to train in as a team,” Henry said. “Now, we not only have a brand new fitness center for the school, thanks to the Smiths, but we also have a renovated fitness space for the athletes to train together as a unit.”

Michael Smith said the location of the residence hall is fitting.

“This street has special meaning to my brother and I. We used to clean windows and wash floors, and then our treat was breakfast down the street. It has a lot of meaning, Tremont Street,” said Michael Smith to The Suffolk Journal.