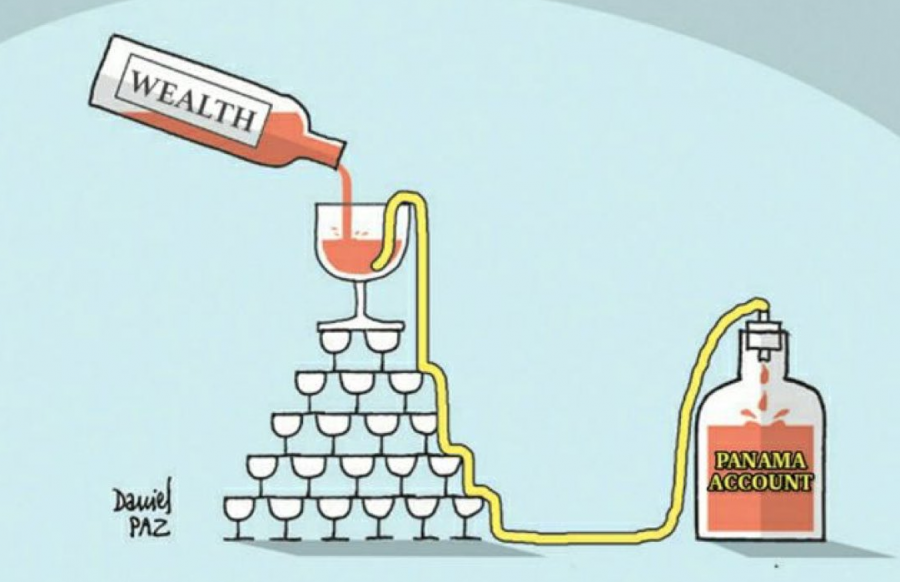 One of the most controversial, long-running American discussions pertains to the amount of taxes that members of the top one percent pay compared to middle and lower income citizens.

Recently, a massive amount of information was released that shined a light on ways that the global elite protect their wealth. The Paradise Papers, dubbed as such because of the tropical locations of the law firms involved in the leak, are a collection of more than 13.4 million papers that hold the tax secrets of the wealthy and powerful. Within these papers are the financial information of people such as Queen Elizabeth II and gargantuan companies like Apple CEO Tim Cook and Nike CEO Mark Parker.

“One of the people named in this was the Queen of England, by law she doesn’t have to pay any taxes at all, but she does pay substantial taxes though on a voluntary basis,” said Suffolk University Economic Professor Jonathan Haughton.

According to Haughton, the leak has raised geopolitical questions, but it may not be as straightforward as it was initially received.

“To argue that she’s doing something wrong when she has the sovereign and doesn’t have to pay any tax is a little unfair, but it’s a political issue,” he said.

The leak has provided further support to the argument that individuals with higher income brackets in the United States tend to have more legal options to  tax breaks than those with significantly lower income.

“They’re not problematic for me, it looks to me as if people all over the world taking advantage of low tax places to keep their money,” said Suffolk University Economic Professor David Tuerck.

“If Americans are upset that some citizens are holding their money in low-tax locations then the way to handle the situation is to reduce taxes in the United States, so people will bring back their money,” Tuerck said.

“I can’t find anything sinister about people trying to minimize the tax burden that they have to bare,” said Tuerck.

The Paradise Papers were initially leaked to German newspaper, Suddeutsche Zeitun and later shared with the International Consortium of Investigative Journalism (ICIJ).

Suddeutsche Zeitun is the same newspaper that initially reported on the Panama Papers just last year, according to The New York Times.

The Paradise papers, a 1.4-terabyte leak, is the second biggest data leak after the Panama Papers.

Nearly 120 politicians and numerous other blue-chip corporation owners have liquid assets stored in off-shore banks, according to the Global Research and The New York Times.

“The Paradise Papers are problematic because those who are associated with President Trump or represent the professional committee would have broken ties with what they represented under oath, so that is misleading and also problematic in terms of purging themselves,” according to Suffolk University Political Research Director David Paleologos.

Nearly half of the documents came from the Appleby Law Firm and 500,000 more were from Singapore-based firm Asiaciti Trust, according to multiple reports.

Appleby is an offshore law firm with 10 offices around the globe with their headquarters in Douglas, Isle of Man. According to the Appleby website, the company’s goal is to “advise global public and private companies, financial institutions, and high-net worth individuals.”

In fact, political figures such as United States Secretary of Commerce, Wilbur Ross and his private equity firm, was one of Appleby’s most substantial clients.

Appleby’s extensive list of high-profile clients leads them to be accounted as members of the “Offshore Magic Circle,” an informal name referring to a group made up of the world’s largest offshore law firms, according to the ICIJ.

According to the ICIJ, the incriminating documents depict the operations of Appleby spanning from 1950-2016. The documents came in the form of emails, bank applications and client emails, among others.

“Now it may be that we’re also cynical and there are plenty of ways of sort of avoiding taxes within the United States,” said Haughton. “Avoiding is legal. Evading is illegal, that’s the distinction. So tax avoidance is a perfectly legal process where you try to minimize your tax. Evasion is cheating and that’s quite different.”

Appleby has since released a personal statement explaining their position in the Paradise Papers.

“We wish to reiterate that our firm was not the subject of a leak but of a serious criminal act and our systems were accessed by an intruder who deployed the tactics of a professional hacker.”