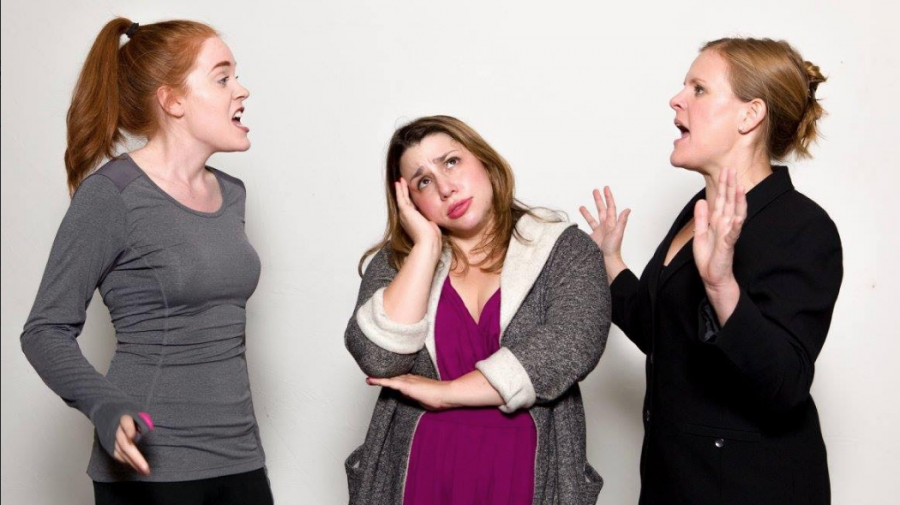 Performative art provides a platform for people to explore the larger issues that complicate life. The play, “Robyn is Happy” is a meditation on friendship and intervention that confronts these concerns without contributing any explicit solutions. Rather, the production affords the audience the opportunity to attain a nuanced perspective on the way friendship can be navigated in today’s age.

Held at The First Church of Boston, the play sets three women, Robyn, Hannah and Trudy, all in their thirties, who have been friends since elementary school, on a cabal to untangle the problems vexing their lives.

Written by Michael Elyanow and directed for the first time on the East Coast by Kelly Smith, the sole issue of the play is the lack of addressing the incendiary lines spoken by Hannah, played by Christine Dickinson, to her friends.

Otherwise, the production tackles themes such as the perils of choosing love over friendship, how to handle a friend’s self-abuse and the trouble of rebuilding a broken friendship with such heavy consideration. In the first scene, Robyn is confronted about her developed habit of binge drinking and how it leads her to participate in a drunken hookup with a younger man in her office. Her friends believe they’re doing the right thing by intervening in her life, but it only divides them further. As the play progresses, their collective friendship turns bitter. Their inability to reconcile their differences leads to dire actions to be taken, eventually resulting in an appropriate reunion in the end.

This first intervention is one of many that occur throughout the performance, thus becoming an examination of what it means to intervene in a friend’s life and how it should be handled. Each intervention that occurs afterward is never announced as such, rather they are the subtler methods of intervention, ones that try to avoid confrontation. The idea of intervening with a friend’s life is also discussed, as Hannah expresses the anger she feels against her friends’ unwillingness to prevent her two failed marriages.

Watching the three actresses perform for an hour and thirty minutes was a delight. The chemistry between the trio was amusing as they handled dark matters with witty one liners and heated repartee.

Hannah brings about the conflict in the play because she’s, initially, worried about Robyn’s health. She then becomes remorseful of the distance growing between the trio. Dickinson plays her role convincingly, developing the character as the one who has the most emotional investment in the play. When the trio gets into an argument resulting in Trudy and Robyn leaving Hannah alone in her apartment, Dickinson displays an adult temper tantrum that remains heartfelt despite seeming silly.

The titular character is not the focus of the play, but that is not the fault of actress Amie Lytle. She gave a nuanced portrayal of a hard working lawyer trying to secure happiness that was once hers. Her character development over the course of the play is convincing. She proves to be a powerful presence on the stage, and has great chemistry with the other two actresses as well.

The real star of the show is Lauren Elias as Trudy, who has the most interesting character development over the course of the show. First introduced to the audience as a weak, indecisive person who is manipulated into taking action by Hannah, Trudy blossoms into a strong, assertive woman who finds power from within her character. Not only does she develop a powerful presence on stage, she manages to be the comic relief of the play. She is wildly hilarious with her lines that cut through the tension without ever breaking the pace and tone of the action on stage.

Considered to be blend of “Sex and the City” and “Titus Andronicus,” the play does take on some elements of each of the properties. The play does revolve around three sexually empowered women similar to the show, and while their sex lives are important to understanding the characters, it is not the focus of the play. Hannah does sever her hand in the name of friendship, similar to how Titus does the same to save his son, but instead of more death, her amputation leads to reconciliation. This play merely extracted aspects from both, and is produced as a formidable story in of itself.