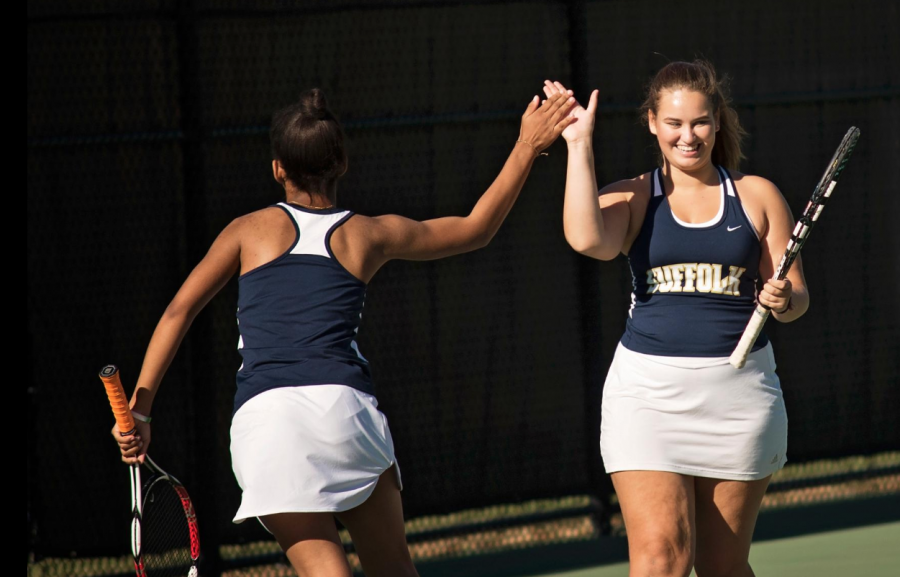 The Lady Rams lost a tough 5-4 match against Regis College on Sept. 27, which motivated the team to bounce back and motivated them to dominate in multiple matches over Lesley. The Lady Rams took the court and obtained an 8-1 victory over the Lynx on Sept. 28, which ignited a win streak for the team. The Rams had another dominating triumph over Albertus Magnus on Saturday, with a final score of 7-2, and then beat Lesley for the second time this season, 7-2.

Leading the charge for the Lady Rams in the first bout against Lesley was the duo of Jacquelyn Nakamura and Danlyn Medou who defeated these opponents in the second doubles to the tune of an 8-6 set. This win helped even out the score and set the tone of what was a smooth day moving forward for the Rams. While there were many impressive singles performances, junior Delaney Dunlap’s performance from the one spot stood out as she fought hard all the way into a third set where she defeated Lesley’s Caroline Kiddie, 11-9.

As for the matchup that took place against Albertus Magnus, it was an all-around commanding effort from the Lady Rams in the doubles section, as the team swept all three matches early in the day. Senior Nakamura put a bow on the win later in the day and came out of her singles bouts victorious in straight sets (6-2,6-1).

In their latest victory versus familiar foe Lesley on Monday, the Lady Rams were able to extend their win streak to three. A convincing victory in what was the team’s second meeting with the Lynx. Danlyn Medou and Ahilya Malhourta led the match off with a doubles victories. While it was close to later in the competition, the Lady Rams pulled away in singles play. As the lineup won four out of the five head-to-head in singles play, the team was able to put the finishing touches on their fifth win of the year.

Now 5-4 on the season, the Lady Rams look to build off of a strong week, since notching their first win in Greater Northeast Atlantic Conference (GNAC) play against Mount Ida College.

“I’ve been proud of how hard the [team] competes and give it their all every time they step on the court for their matches,” said Interim Head Coach Matt Tiberii in an interview with The Suffolk Journal. “They are improving with every match.”

This is Tiberii’s first year with Suffolk and as the head coach for the Lady Rams, however, he does not lack coaching experience. Having coached tennis for more than 20 years, Tiberii’s transition to Suffolk has been a smooth one with the support of the Lady Rams and the trust that they, in turn, ensue in him.

“Coach [Tiberii] is awesome. I remember hearing the two most important characteristics of a head coach are organization and motivation, and that’s coach for you,” said junior Emily Bean in a recent interview with The Journal.

Isabel Rathlev, a multi-year veteran of the team, said she looks to give the team a sense of leadership on, and off, the court. She plays a pivotal role for the ladies in her final season, playing first doubles as well as a mix of second and third singles. Like many of the players on the team, tennis has always been a big part of her life. She has played the sport since she was nearly three and a half years old. Growing up with two parents that played tennis, she said it allowed for tennis to really be a big part of her.

In the recent match versus Lesley, she was able to turn what was a rough start to the day with a doubles loss featuring junior Elena Cisneros Garcia, to back-to-back singles victories from the three spot, winning 6-4 in both sets.

“It was a total grind but I hunkered down and got the ‘W,’” said Rathlev in an interview with The Journal.

The Lady Rams look to build on what has been an impressive stretch, going 5-1 since the first win of the year against Wentworth. The Lady Ram’s will travel to take on Salve Regina University Thursday at 3:30, with the hopes of extending their win streak to four in a row.