Tweeting away the presidency

We currently have problems with multiple countries that could threaten our national security.

Evidently, Russia meddled in our election for president, and continues to hack into U.S. and European government and industry systems.  Also, Russia occupies eastern Ukraine. 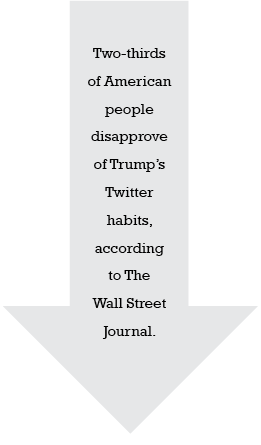 China laid claim to the South China Sea and is constructing bases on islands claimed by other countries.  The Chinese military has confronted U.S. Naval Vessels and Aircraft.

North Korea tests ballistic missiles, which are capable of reaching the U.S.   They are working on developing ballistic missiles outfitted with nuclear warheads by 2018.Iran is involved in the Syrian War and is a backer of Islamic terrorist organizations.  It keeps challenging our naval forces in the Persian Gulf and continually threatens to disrupt shipping in the Strait of Hormuz.

A dictatorship in Venezuela is causing instability in the country.

Given these situations, what are Trump’s priorities?  He is focusing on repealing Obamacare, building a border wall, banning transgender people from our military, worrying about news leaks, undermining the media, replacing White House staff, pardoning a convicted criminal sheriff, attacking NFL and NBA players, and showering Putin with platitudes.

Trump is fraying the fabric of American society, tweeting away the presidency and jeopardizing our security.

Trump is our disastrous President.