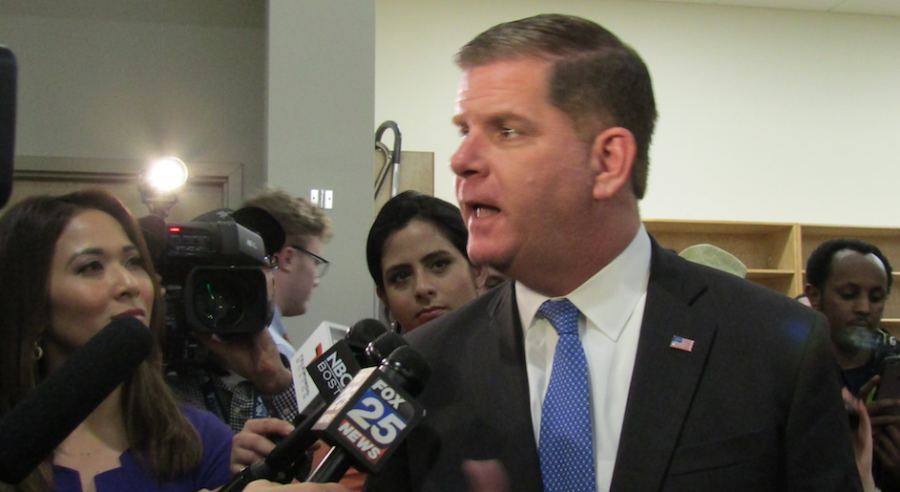 Boston’s Mayor said that he called the press conference because he was “disturbed and angered” by the news coming out of Washington D.C.

“The White House is advancing the most destructive and un-American threats made during the campaign,” said Walsh to the crowd. “The latest executive orders and statements by the president about immigrants are a direct attack on Boston’s people, Boston’s strength, and Boston’s values.”

The Roxbury Islamic Society of Boston Cultural Center (ISBCC) hosted the mayor and his team of city correspondents to assure Boston residents that politics at the nation’s capital will not harm them.

Walsh used his platform to offer a direct message to anyone who felt threatened by today’s political climate.

“You are safe in Boston,” he assured, as the crowd immediately responded with applause and loud cheers.

“I will do everything lawful in my power to protect you,” said Walsh. “If necessary, I will use City Hall itself to shelter and protect anyone targeted unjustly. We will not retreat one inch from being the welcoming, diverse, global community that’s made us one of the most successful cities in the world,” said Walsh.

Walsh also said he will continue to stand with his decision that Boston will remain a sanctuary city; a statement which he has adamantly backed in the face of threats by President Donald J. Trump that the city will lose federal funding.

“I’m not afraid of losing money; first of all, because we got the constitution on our side and secondly, we’re doing the right thing in the city of Boston,” said Walsh followed by a round of applause.

Shortly after Trump issued the executive order that temporarily banned citizens from seven predominantly Muslim countries entrance into the United States, Walsh issued a statement that “He would not be intimidated.”

The objective of the citywide forum was to direct communities that were affected by the recent executive orders toward city resources that answer questions and express solidarity, while gaining feedback from immigrants and refugees.

On Wednesday, Walsh denounced Trump’s executive orders to target and get rid of undocumented immigrants and doubled down on his offer to house undocumented Bostonian immigrants in City Hall.

This forum was not the first time Walsh showed support for immigrants and refugees.

Mayor Walsh attended a rally in Copley Square on Jan. 29 in order to support Muslims after the president’s travel ban was issued. He also joined protesters at Logan Airport.

Senior Imam Shaykh Yasir Fahmy spoke after Walsh and fondly recalled seeing the mayor at the airport protest. He commended the overwhelming support that Boston officials gave to the community.

“The outpouring of support and love and comradery and brotherhood and sisterhood coming out to stand in support,” said Fahmy, “that is the spirit that is thriving right now and perhaps it is a blessing in disguise with all that is happening in our political rhetoric. We are melding into this beautiful space called America where it is a land of immigrants, a land of refugees and we always want that to be the case.”