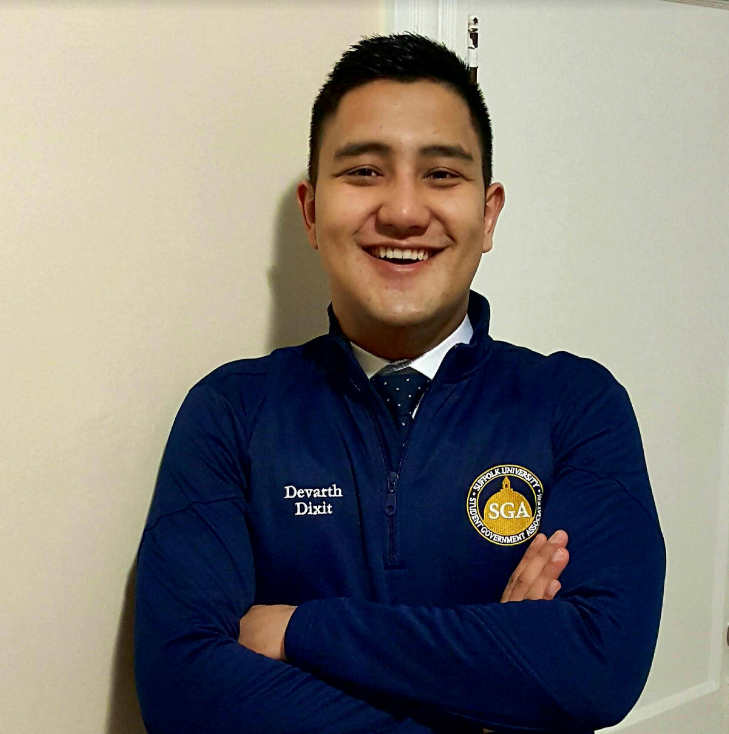 The public debacle that was recently plastered across local news headlines regarding Suffolk University has brought some students to question the leadership at their own college. Student Government Association (SGA) presidential candidate and Chair of the Diversity Committee Devarth Dixit said he believes he will be able to impact and unite factions of the university if elected SGA president for the 2017-18 academic year.

Dixit, an international student who came to Suffolk from his home country of Nepal, discussed his vision for Suffolk and how his contribution as the potentially newly elected SGA President would promote additional transparency and involvement throughout the university in a recent interview with The Suffolk Journal.

Said Dixit of his campaign initiatives, “I would like to be an advocate for students as well as a representative. Not all representatives are advocates and I want SGA to be a louder voice, I want to be bold.”

He said that part of this idea involves advocating for students on a larger scale, making statements on behalf of SGA that display support for certain campus organizations and taking a clear stance when issues arise. Part of this involves not only SGA’s accountability, but that of the university administration and community. Dixit discussed a proposed idea that would allow students and the leadership at Suffolk to convene on an increased regular basis.

“What I want to see happen is to have a semi-annual town-hall forum with the Board of Trustees open to the whole university,” said Dixit. “I really want to have an open forum where Suffolk University students can directly see the people in charge.”

With a global search underway for Suffolk’s next university president, Dixit questioned why students are not allowed to be further involved with the process.. As an action oriented candidate, Dixit said if he were to become a member of the Presidential Search Committee, he would like students to know if there are any presidential candidates.

Dexit said his experiences and unique outlook as an international student would be an asset to the Committee. He hopes that someone who represents the inclusive community Suffolk stands for will eventually take the highest office. The aspect of diversity at Suffolk is one of our most important resources representative of the university Dixit said. Being the Chair for the Diversity Committee, Dixit said he has worked on a number of resolutions, one requiring faculty to attend mandatory diversity trainings in which he drafted during the 2015-16 academic year. Dixit said this resolution passed, and although it stalled in original implementation, he was happy to see it officially programmed in the fall of 2016.

The quality of “knowing what the students want” by taking time to attend student events and learn about the students is a characteristic Dixit said he wants the next President to bear. By creating a relational dynamic between students and administration, Dixit said a more effective search can take place.

“The past few times we’ve appointed presidents, I don’t think students have had any say in it,” said Dixit. “[If] we know who the candidates are, we can have an amazing cooperation and  relationship between the Presidential Search Committee, the trustees and the students, to appoint a president.”

With a new university President a top priority for Suffolk, Dixit said he is looking forward to a friendly competition in the SGA presidential race that will only make both candidates better. Dixit said he attended his first SGA meeting with his counterpart who has become his good friend, SGA Vice President Daniel Gazzani. Regardless of the outcome, Dixit said the two will be able to work as a part of SGA together.

Dixit said that a lot of students have the impression that Suffolk is a “commuter school” and wants to reject that mindset. Disagreeing with that notion, Dixit said he wants to advertise that the university has a sense of community that some say is lacking, and wants to foster that environment to be more inclusive.

“Whenever Devarth talks about his campaign, the one word I hear most is inclusion,” said film and media studies major David Apostolides, who is working closely with Dixit’s campaign. “On one level, a goal of his would be to ensure that Suffolk remains an inclusive environment for all students, and one where everyone can feel comfortable. But the second meaning relates to how students are involved in what SGA does.”