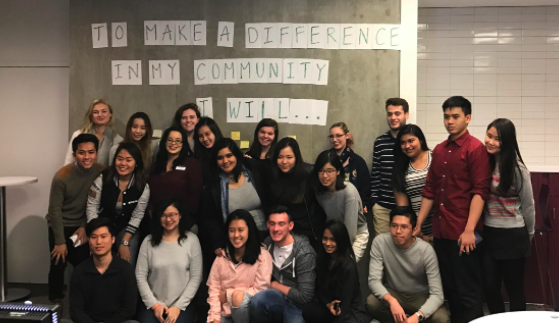 The 20 Somerset café was emptied out at 5:30 p.m. by AIESEC’s youth leadership group to create the space for the activity. AIESEC members made a grid along the floor out of masking tape and placed participants in the middle of the room as a starting position.

Questions were asked aloud by Fatema Mohamedali, the event host and member of the Talent Management team at AIESEC. These questions related to the experiences of the participants prompted a step forward or backward between the tape lines, and the moves depended entirely on personal responses. The position of the participants at the end of the 40 questions determined their privilege relative to the rest of the group.

Examples of questions posed to the group are: “If you can show affection for your romantic partner in public without fear of ridicule or violence, take one step forward,” and, “if you studied the culture or the history of your ancestors in elementary school take one step forward.”

“This is a challenging activity,” Mohamedali said to the group. “We require a lot of maturity from all participants.”

The Privilege Ladder concept was taken from a Buzzfeed video, which originally called the exercise a privilege walk, in which ten participants responded to the questions with steps either forward or backward.

Mohamedali said in an interview with The Suffolk Journal that she drafted the questions, combining some from the video with her own and revised the list five times. She said AIESEC previously used the privilege ladder as a bonding exercise as well as to test it for the Suffolk event.

After the exercise, the group gathered to discuss the significance of their own positions on the ladder and the importance of privilege.

Of the 27 participants, three finished the exercise behind the starting position. The furthest to the back of those three, Suffolk Diversity Services Director Lizette Rivera, was not surprised at the results.

“As a minority woman, I expected to be in the back,” said Rivera.

Rivera addressed the group after the privilege ladder exercise, and called for students to utilize Diversity Services a campus resource. She said she hopes that international students especially will begin to use the space. She also provided some words of encouragement to the participating students and AIESEC members.

“Hard work and perseverance does pay off,” said Rivera. “We can all do better. We all can, and lift each other up.”

AIESEC Boston Marketing Vice President Tyler La told The Journal in an interview that among Boston’s colleges, Suffolk is the most involved with AIESEC. La said he was pleased with the turnout for Privilege Ladder.

La said AIESEC will accept new members on the Boston team in January of next year, and Suffolk students can expect two to three AIESEC events on campus per semester moving forward.