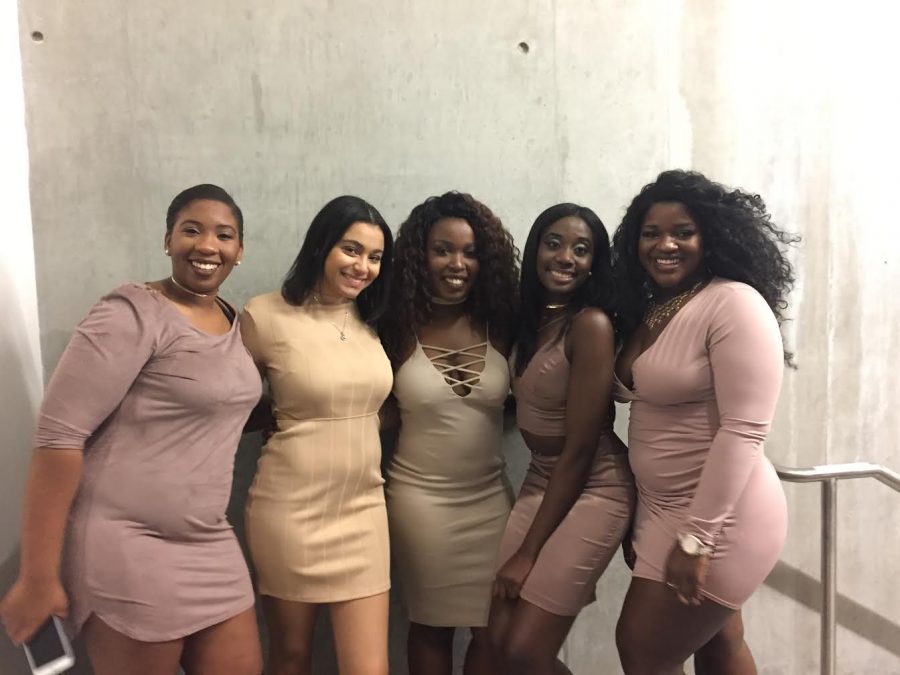 Twenty flags of the Caribbean hung around Somerset’s basement as strobe lights lit up the blacked out room on Friday. The Caribbean Student Network (CSN) hosted their second annual show Africaribana to celebrate African, Caribbean and Hispanic heritage. The roaring music announced to everyone that Suffolk was home to students who were proud of their culture and where they are from.

“It’s for everyone. It’s just an event to bring together only the Caribbean students on campus, but also all the students who want to learn about culture or just want to have fun,” said CSN member and junior psychology major Keynessa Nazaire. “We’re trying to make it an annual thing because there aren’t a lot of events that highlight Caribbean students, so this is just one way to put it out there.”

Many people in attendance displayed flags as a part of their outfits; some sported white pants with Haiti’s flag printed on them while others proudly wore flags for everyone at the event to see.

As a part of the event, Suffolk’s TrXbe, Suffolk University’s African Hip Hop dance teams, came out to perform and entertain the crowd. Their moves were unwavering and fierce as the crowd cheered them on while their feet stomped to the rhythm of the music.

“It was nerve racking, but it’s always great to perform in front of people you know and go to class with,” said sophomore TrXbe performer and public relations major Janaye Kerr. “I really like to immerse myself in other cultures. It’s the most fun thing honestly.”

Throughout the event more people continued to arrive, filling up Somerset’s basement. Guests ate food, danced together, socialized with one another and spoke in a variety of languages.

“The music is a representation of what people from other countries are from, said freshman and sociology major Walger Charles. “I like how they had a variety of music when the dancers were performing.”

Students were served many different kinds of ethnic and cultural food throughout the night. CSN had brought out brownies, cookies, veggie quesadillas, mini Jamaican patties, fried chicken, veggie empanadas, beef teriyaki, chicken quesadillas, juice, and sodas. DJ F.B. played a mixture of hip-hop and reggae as guests moved their bodies to the rhythm of his beat.

“When People speak of Haiti they always say things such as third world country, or its poor, or the president is bad,” said Lejeune. “I know growing up I was told to say that I wasn’t Haitian, that I was Dominican because it was just so embarrassing. It’s important to show people that we’re more than what the news shows what the Internet shows.”

While everyone from Suffolk, regardless of cultural or racial background, was welcomed, the majority of people who attended were people of color. Many there wanted to share their culture and learn about the culture of others as a part of embracing who they are.

“That’s the motherland, so I have to represent the motherland,” said freshman CSN member Anye Nkimbeng. “I feel like if you don’t know where you started you won’t be able to move forward.”

It was a night full of peace and unity as people of all different ethnicities and racial backgrounds came together to celebrate and embrace each other’s heritage.

Due to the large interest in this event, the members of CSN plan to continue hosting the event.