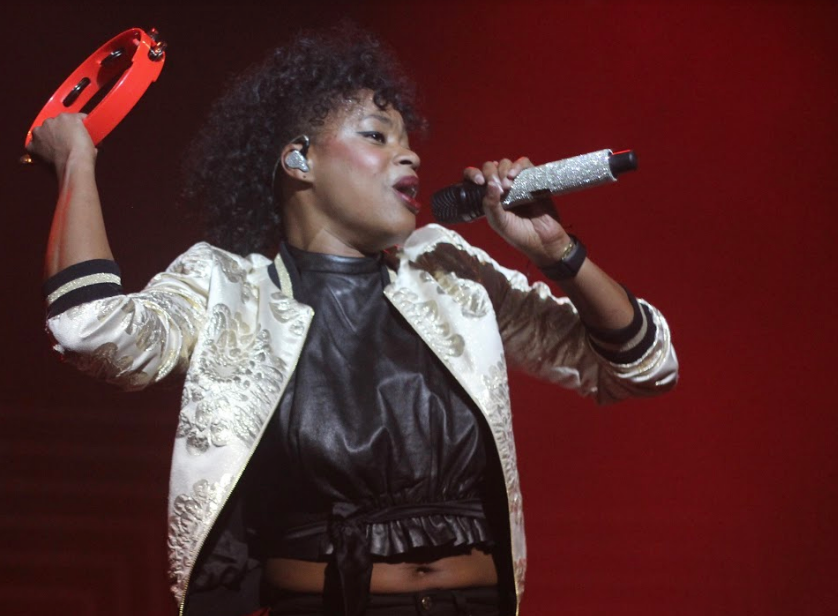 Fans were not deterred by bad weather and could be seen lined up in the rain, waiting for the doors to be opened to Fitz and the Tantrums as they revisited Boston on Tuesday. As soon as doors opened, young and old fans alike rushed inside eager to get the best spot possible to see the performers.

With an intense stage presence, the band took advantage of every inch that was available. From the moment that the group took to the stage they were full of life and energy, a vibe that was quickly absorbed by the crowd. Not a single concert goer kept to their seat during the entirety of the show.

Michael Fitzpatrick otherwise known as “Fitz” is the lead vocalist of the group. He and co-vocalist Noelle Scaggs had undeniable chemistry on stage together.

Fitz and the Tantrums reminded the audience several times that they didn’t enjoy performing to an audience that wasn’t interested in dancing and having fun with them. Fitzpatrick made it clear that he wanted the audience to be sweating and having a dance party right alongside him. Scaggs even had the audience jump up and down while swirling their arms overhead in big circles to go along with one of their songs Rollup.

The group mainly performed songs from their newest self titled album that was released this past June including “Complicated,” “Burn it Down” and “Rollup.” The most popular from the album is “Handclap,” an upbeat song that had the whole audience on their feet dancing and clapping along.

Throughout the concert Fitzpatrick and Scaggs went out of their way to point at and make eye contact with individual fans in the crowd to make the concert more personal. This amped up the crowd even more than they already were as they felt more connected to the performers onstage.

As a means of centering the focus of the performance and settling the audience down before the final song, Fitz and the Tantrums took a moment to reflect on the recent presidential election. Fitzpatrick took a moment to remind the audience that no matter what side of the election someone may have landed on, the most important thing is to continue to show kindness and compassion to everyone in all walks of life.

Up and coming singer Barnes Courtney was the perfect opening performer for the group with his enthusiastic and energetic stage presence. During his final song he nearly knocked the microphone out of its stand to which he joked with the audience that he didn’t even need a microphone before asking permission to finish the rest of the song.

The sextet formed in Los Angeles in 2008 and have been unstoppable since. “Handclap” is their most popular song, coming in at 35 on iTunes Top Songs chart and is the most popular song on their third album. Their first album “Pickin up the Pieces” released in August of 2010 and was followed by their second album “More than Just a Dream” which released in May of 2013.

The concert was upbeat and left the audience in a positive mood as they left the House of Blues. An extraordinary performance, Fitz and the Tantrums spoke to the emotional elements of the audience, evoking an atmosphere of euphoria and delight.

Their music is available on Spotify, Apple Music and iTunes.