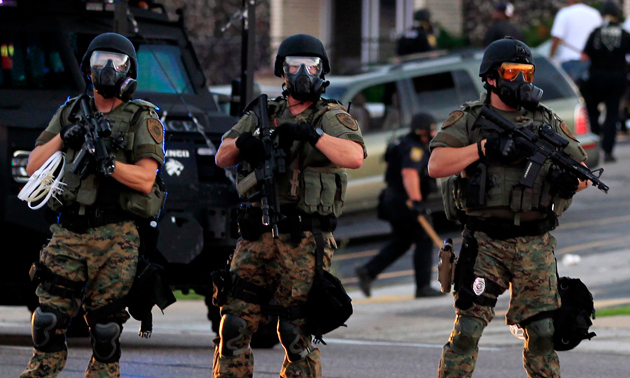 Military equipment, including weapons and combat vehicles, has returned to the United States en mass in recent years through a government program designed to arm police.

Do Not Resist, a documentary bringing to light this militarization of police, made its Boston premiere Thursday night in the MFA’s Remis Auditorium, followed by a discussion with the film’s director Craig Atkinson and a panel of Boston community leaders.

The film drew scenes from demonstrations in Ferguson, Mo, SWAT team ride-alongs in South Carolina and hearings regarding the 1033 military Surplus Program.

The 1033 Program, created by the National Defense Authorization Act of 1990, placed under the jurisdiction of the Defense Logistics Agency,  allocates used military equipment to domestic law enforcement. Eligible items range from TV monitors and sleeping bags to armored assault vehicles and firearms.

Domestic departments access the program through a governmental website where they may choose from a list of available equipment. Fees are required for the shipment and storage of the equipment, but the departments do not pay the cost of any equipment that they request. The total value of equipment donated exceeds $4 billion, according to the Washington Post.

“We’ve spent the last 15 years paying for wars we never should have fought,” Atkinson said during the post-show panel.

Mine-Resistant Assault Protection (MRAP) vehicles are included in the list of surplus equipment being shipped to law enforcement agencies. They are the proposed replacement for the Army’s Humvee and part of a $50 billion project the US military employs to protect troops from roadside IEDs in overseas combat zones, said Atkinson.

The film shows a stockyard filled with hundreds of MRAPs that have returned to the U.S. to be refurbished and sent out to police departments around the country, a facility that is comprised of millions of taxpayer dollars.

Atkinson, whose father served as a SWAT officer for more than 20 years in Michigan, took inspiration from the heavy police response to the Boston Marathon bombing in 2013. After seeing the deployment of several MRAPs and numerous assault weapons, he decided to make a film to uncover the extent of the changes made to domestic law enforcement since his father’s retirement in 2002.

Atkinson discovered an all time high SWAT deployment rate of 50,000 teams in 2015, more than 15 times the yearly rate of the 80’s when Atkinson’s father began his SWAT career.

Police response to situations like the Ferguson demonstrations in 2014, depicted in the film across several nights, raised public concern about the use and distribution of 1033 program equipment.

Kentucky Senator Rand Paul appeared in the film during a recorded Senate hearing. He stated that much of the assault class gear provided by the 1033 Program is reserved only for response to terror events and is not to be used for the purpose of riot suppression.
There is not a clear understanding of this reservation within police departments across the country, according to Atkinson.

The images from Ferguson have helped to launch several investigations into the usage of the equipment.

“Clearly there has been a mission breach,” Atkinson said.

The panel discussion consisted of Co-Chair of the Housing Committee for the NAACP Segun Idowu, founding Executive Director of the National Center for Race Amity at Wheelock College William H. Smith and Director of the Racial Justice Program for the ACLU Rahsaan Hall.

Panel members all voiced concerns about the effects of police militarization on communities of color.

“We have to push back against the militarization of the police,” Hall said.

With equipment and training becoming more similar to that of the armed services, the panel members have grown concerned about the effects on the attitude of officers benefitting from these similarities, Idowu especially.

“They are a cult, it seems like,” Idowu said. “That mentality is causing officers, when they enter my community, to treat people as combatants.”

Do Not Resist will remain at the MFA through Nov. 26, and will be available to stream on Amazon Video Dec 15.