After a blog post from a Suffolk University sociology student went viral after a professor had commented on specific words saying that it was not her “language,” senior Tiffany Martínez had more than 12,900 social shares as of late Saturday night on Facebook that had shared a link to her original blog post.

Tiffany Martínez posted on her blog “Viva Tiffany” a post entitled “Academia, Love Me Back,” highlighting an assignment that she had received back from her sociology professor, in which she was accused of not writing her entire paper.

“Please indicate where you cut and paste,” the unnamed professor wrote at the top of her paper for her senior seminar class.

In an interview with The Suffolk Journal late Saturday night, the self-proclaimed student activist  told a Journal reporter that it was not her goal to have a professor get “fired” after posting her blog post on her personal website, but instead to educate others.

“I’m really looking for people to just be more educated about this stuff, because I know a lot of people are already reading my stuff and are already confused on why I even have a problem with it,” said Martínez. “A lot of people don’t have the experiences I have, a lot of people don’t really understand how hurtful it is when you tell a student who’s been fighting their whole life to be validated that their scholarly work isn’t theirs.”

Martínez said that she is looking for people to listen to her story, as well as to the other experiences that have been shared in comments on her original post.

“[I’m looking for programs to be] implemented for professors to just learn how to be more inclusive to their students and how to respect students’ privacy because that’s what I felt was violated,” said Martínez. “It was my privacy violated and also my self worth.”

Suffolk’s sociology department did not respond to communication from The Journal for a comment to this article as of early Sunday morning.

Martínez commented on how this was not an isolated incident but said it’s “extremely common.”

The sociology major and first generation college student of Bronx, NY, served as a prominent student voice on campus during the debacle that occurred during the spring semester with the Board of Trustees and former President Margaret McKenna, talked on how there is a diverse group in many sociology classes from various backgrounds.

“There’s people in the class who have lived in Saudi Arabia their entire lives and then came here for college, and then there are people who lived in a town in Connecticut their whole lives and have never been on a plane,” said Martínez. “There’s such a diverse community at Suffolk where people have such different experiences that really molds the way they think and the language that they use.”

Martínez said in the interview that she has had to explain in her various sociology classes why presidential candidate Donald Trump’s statements are offensive to immigrants and the Latinx community. She said that she has confronted fellow students who have called undocumented immigrants illegal.

“Sociology is the study of culture so we’re always talking about these different social justice issues,” said Martínez.

In Martínez’s blog post that was published on Thursday night, she wrote, “As a student in an institution extremely populated with high-income white counterparts, I have felt the bitter taste of not belonging.”

“I’ve definitely encountered a lot of different issues and I don’t think they are specific to the Suffolk community,” said Martínez. “I feel like it’s more of a system thing of being a Latina women in Boston and being a minority in my classrooms. Obviously there’s going to be things that are said that are going to offend me.”

Martínez cited a specific incident during last year that showcased one scenario where she was not recognized as someone who belonged.

“When I was a Resident Assistant last year, I had a resident assume that I was a custodian, that I was a cleaning lady because I was speaking Spanish to my mother on the phone,” said Martínez. “And mind you, I was an RA, and that was a resident in the building that said that to me.”

“I think it’s really important to just take this as a teaching moment to train professors and teachers on how to properly confront students of all backgrounds when you suspect them of turning in work that’s not theirs,” said Martínez.

Support for Martínez has come from across the country. In a letter addressed to Suffolk’s Acting President Marisa Kelly, more than 175 signatures from members across academia have signed an acknowledging response to this now public incident. Names on this list stretch from scientists and professors, to journalists and Ph.D students. The signatures come from universities such as Ohio State, Brown University, Yale, the Juilliard School and King’s College in London. 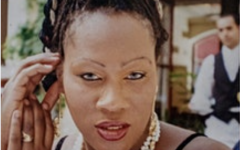 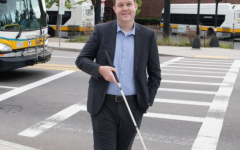 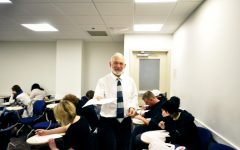 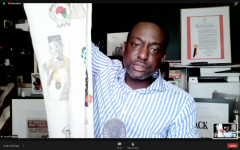