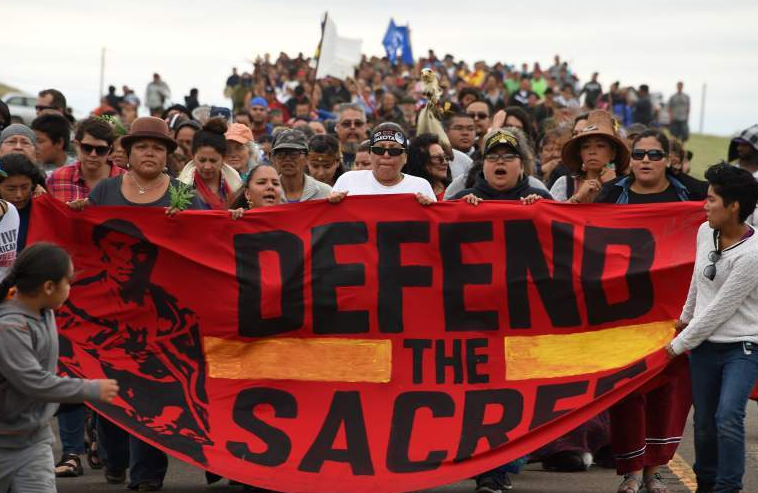 Since April, members of the Standing Rock Sioux tribe, a Native American tribe in North Dakota, have been defending their water and land from the production of an oil access pipeline. The pipeline would stretch approximately 1,000 miles from North Dakota to Illinois and cross under the Missouri river. In the process, the oil pipeline would put the health of members of the Sioux tribe in danger.

Construction has caused a massive uproar; thousands of people from all over the United States and other parts of the world have come together in the Southern part of North Dakota to protest against the pipeline, letting people know that they are not going to stand for this abomination.

The reaction sparked from thousands is hardly inappropriate; the U.S. has a long history of abusing and quite frankly have made nearly innumerable attempts to dehumanize and eradicate members of the indigenous population.

The $3.8 billion pipeline would carry approximately 500,000 barrels of oil per day across 1,172 miles, right underneath the Oahe River, just a mile away from the Sioux tribe, according to National Public Radio and The New York Times. The Army Corps of Engineers granted permits to Energy Transfer Partners, the company that owns the pipeline, according to Fox News. ETP ensured members of the community that their water would be safe; however, there have been multiple incidents involving pipelines contaminating water that contradict that.

Earlier this month, in West Columbia, Texas there was a massive oil spill of 60 barrels of oil in an oil leak, according to Counter Current News. In another incident, ExxonMobil’s Arkansas oil pipeline ruptured, letting out thousands of barrels of oil spill into the Mayflower river. More than 20 homes had to be evacuated and over 19,000 barrels have been recovered since the spill, according to Counter Current News. With that in mind, it seems completely understandable that members of the Sioux tribe would not want a pipeline so close to where they live.

Members of this community have fought tooth and nail in the streets and in the courtroom to cease the production of this pipeline. In return, the pipeline owners employed private security to combat the protesters. Numerous people were bitten by dogs, arrested, and pepper sprayed. These ludicrous attacks were brought against a peaceful community that only wanted to ensure the health and safety of their land and their lives.

The production of this oil pipeline was temporarily suspended by the Obama administration, according to NPR.org. However, it should not have taken this long and it certainly should not have gotten to the point where ancient American Indian burial sites were violated and destroyed.

This access pipeline and the means by which the company has tried implementing it speaks volumes to the way the U.S. generally views members of the indigenous population. Throughout history, the U.S. has largely marginalized members of the Native American population and taken away their resources. The U.S. has broken treaties, raped women and children, brought about a genocide, sterilized women, and implemented methods, such as boarding schools, to force natives into Assimilation.

Even still, Native Americans are most likely to be killed by police compared to any other racial or ethnic group in the United States; they make up only .8% of the population, but account for 1.9% of police killings, according to The Free Thought Project. I find this to be absolutely unacceptable and it flies right in the face of the freedoms that the U.S. so desperately promises people.

The issue with the pipeline follows the pattern that the U.S. has of attacking the native community. This ongoing struggle, speaks to how corporations in the U.S. take advantage of people who are not members of the top one percent; this is not only an issue of racial discrimination, but economic status as well. As with any community or group of people, if you take away their basic resources, you are taking away their ability to live.

While the U.S. has killed millions of Native Americans and has left their population in shambles, natives are still very much a part of modern day society and should not have their basic rights stolen. Keeping in mind, that those who determine their basic rights are the same ones who historically nearly decimated their population and culture.
It is beyond disgusting that a company would fight for their pipeline to be implemented and even more disgusting that members of the judicial system would attempt to aid them with their ambitions. Water is life, people need water to sustain themselves and thrive as a community. Anyone attempting to take away that right in exchange for profit has sold their humanity.