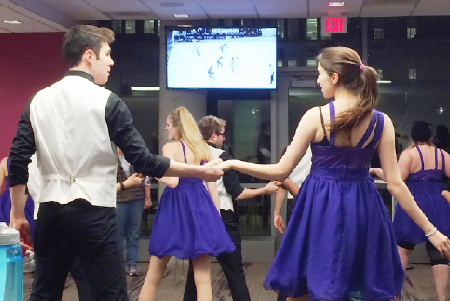 For a team that began with a mere four members when it was founded six years ago, Suffolk University’s show choir Rampage took to Orlando in hopes of continuing its growth. The group has expanded in size and talent over the last few years, and is one of its best since its conception.

Students have joined the choir from various backgrounds and majors, including students who have and do not have a background in show choir.

Johanne McIvor, the group’s director, mentioned that along with hosting, each member of Rampage was given an additional task. The members escorted performers from eleven choirs to different performance areas and assisted in moving risers and band equipment. Others worked as hosts in the event’s lobby, engaging attendees in conversations about Suffolk and working with merchandising.

McIvor, who founded Rampage, was impressed with how far the group has come.

“I’m very proud of the group because we started with four people six years ago and now we’re up to this number,” said McIvor as she motioned toward the ever-evolving group. “They’re very, very dedicated.”

The group’s choreographer, Darvin Hernandez, a former high school student of McIvor’s, joined the group three years ago has also seen the ethic and dedication of its members.

Hernandez explained that there are students in Rampage who used to compete against each other in high school and are now working together on the same team.

Samuel Zeiberg, a senior studying theatre and history, made mention of the group’s improvement over the course of his five semesters with the choir.

“It’s been really great seeing how much the group’s grown and improved since I started,” said Zeiberg.

“This is [the] best year ever, especially having been in it four years,” Bryan said. “We try not to dwell on the past but we’ve had some years where everyone’s kinda hated each other and there’s been drama. This is the first year where we genuinely feel like family and just love each other.”

The newest members of Rampage performed for the first time with the group on a national stage.

“I’ve done the show choir rodeo before, and I also feel very confident with the people I’m performing with,” said freshman fine arts major Julianna Fielding. “They’re such a quirky group of people and I’m really glad I got to meet them. It’s really made my second semester here pretty great.”

None of Rampage’s members seemed too worried about performing at such a big event.

“There’s certainly moments when it’s tense, when we’re really trying to get that one piece of choreography, or nail that one note in a song, but I know we’re all really committed to making it the best song that we possibly can,” said Zeiberg. “That kind of makes everyone feel like they’re in this together.”

Senior Megan Post, who is the group’s public relations coordinator and communications major, said the choir had a chance to bond while in Florida while also impressing their spectators.

“The coordinator for the event told us that we were the best host group yet, and couldn’t say enough good things about how smoothly we helped make the event run,” said Post. “We were given a dedicated electric guitar from the FAME company, a framed record and were presented with the Best ‘Crew’ award!”

Post said the award was a surprise, but was decided unanimously by judges. She explained that the group not only enjoyed networking with the other student groups and directors, but also relished in the opportunity to perform on stage at the Hard Rock Café.

“We’re just so thankful for our music director, choreographers and the Suffolk community for allowing us to make it there and have that amazing opportunity,” said Post.