Art the focus at second Bombinwealth 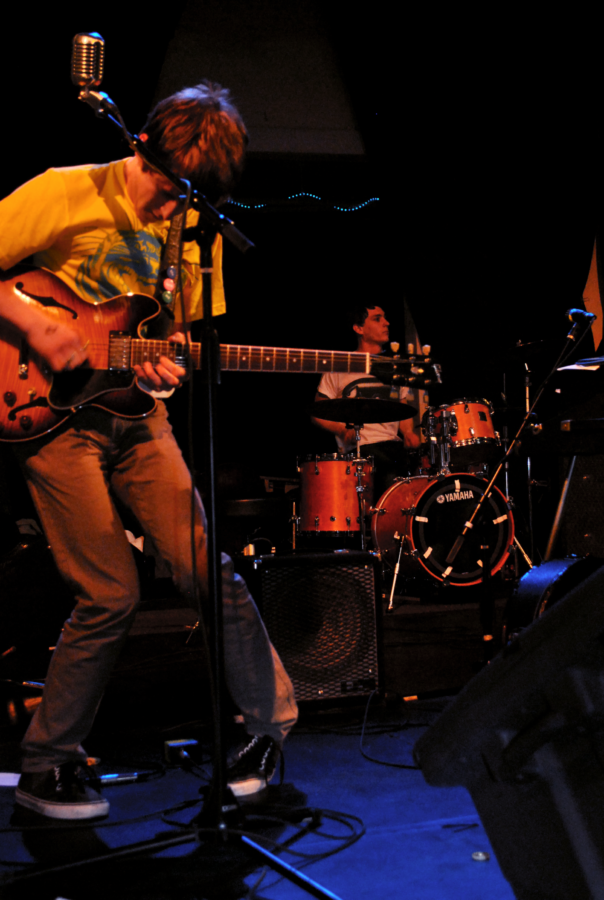 Inside the Y.M.C.A, just a bit north of Central Square in Cambridge, music was playing and art was in the making as over 100 people made their way into the theater for a night of creativity. “The Return of the Bombinwealth” is just the second attempt at bringing together a community of artists in the Boston area to observe the movements and learn from each other first hand. According to the Facebook event page, the event supports the Boston street art and music scenes, both great necessities for the growth of an art scene in the city.

Walking into the theater, attendees could view many pieces of art that have been submitted to the event in hopes of being sold. Around the room, artists talked to those intrigued by their works, while also talking to each other as a learning experience. In front of the room, musical acts played throughout the night, providing a soundtrack to the scene. The musicians, organized by the Allston-based band Mornin’ Old Sport, ranged in styles. Rock bands started the lineup, including The Anymen, The Rodeo Church, and Mornin’ Old Sport, but when they finished up, rapper Outwrite walked up on stage and yelled out to the crowd. He first asked the crowd how they were doing before introducing himself and fellow rapper Defcon. Outwrite noted the change in genre, exclaiming, as the beats started, “We’re about to turn this into a rap show, it’s going to be different, let’s do this shit.”

Dave Reilly, producer and backup percussion for The Rodeo Church, stood outside the venue between sets discussing the show with other attendees. “It’s supposed to be what life should be like every day, you know what I mean,” Reilly said, explaining that when shows are put on nowadays, there is much more emphasis on the noise rather than the art aspect of it, but the Bombinwealth event had a very major emphasis on the art, as art was the main focus. Reilly, who had attended Berklee School of Music, explained that The Rodeo Church’s sound was “the garage, indie rock sound; they’re very pop influenced; experimental stuff. I mean it’s weird; it’s a combination of everything. They were very into the Strokes for a while and now they’re getting more electronic with the sound in the studio, and now we’re in the middle of recording an album, too.”

Artists were painting on canvases as the night went on. Attendees watched as artists like Iansanity, Munster, and Shortstack transformed the blank canvases into a final product.

“The message of tonight is the fact that we’re all lost, and we’re all vagabonds, and we all want to be beautiful and make art and meet each other. The people that make art came here to show it, and the people who want to look at it came here to see it. And people that want to play music came here to play, and the people who need music in their lives came here to listen to it. They’re all local artists, friends of friends, so it’s getting the community together, that’s the point,” said Smolnikova to the Journal. Smolnikova also talked about the importance of mixing artists who create on different mediums, and the importance of movements such as street art.

According to Smolnikova, street art comes from the “need to get something out really fast, get something out on the wall, get something out in public and run away and hide, or just get your name up there and it’s like you actually exist. Getting the street art people together with the fine art people and mixing them all up, they learn from each other. I graduated from BU for painting, and it’s a really traditional painting program and I wasn’t really exposed to design or to street art.” Since then, Smolnikova explained that, through the local art scene, she has met many more people who she hadn’t originally met or known through her group of friends.

While some people mingled, some sat up on the balcony’s theater, watching as the artists performed. The atmosphere of the event was extremely relaxing, because once you walked in there; it felt as if you were a part of something special. As those artists’ outlets hung on the walls around, the inspiration was soaking in. That’s the way art works, it inspires ideas. According to Smolnikova, “humans are communal animals and art is a communal idea.”

Another “Bombinwealth” event is expected to be announced soon.