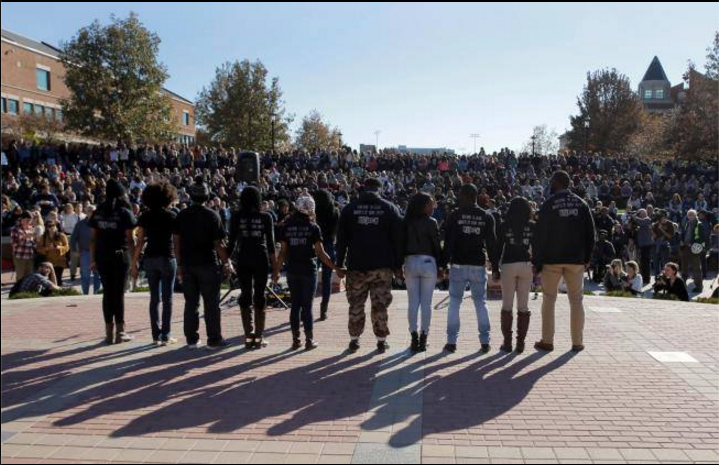 Hearing about the ugliness of racial oppression today at college campuses all over the United States is not what I envisioned for the millennial age.

Students’ fight for equality only saddens me how race in America is still a prevalent issue, and it has reached the point where students of color, particularly black students, feel insecure at their schools.

A diverse community means more than having international students and different ethnicities in attendance; It’s about non-white students feeling comfortable in the environment without fear of facing possible racism.

Now is the time to address this issue because it’s wrong for students of color to deal with racism in their place of study where ethically they should be safe.

On Nov. 9, University of Missouri, known as Mizzou, made headlines when President Tim Wolfe resigned after months of student and faculty protests against him and racial incidents on campus.

Protests included a graduate student on a hunger strike and the entire football team joining his side. These protests happened due to Wolfe’s inability to address students pleas for equality and the many actions taken against the black students, such as a swastika smeared in feces on a dorm wall and white students shouting racial slurs.

Mizzou is not the only university to raise their concerns and frustrations.Students in institutions like Amherst College, Ithaca College, and Yale University have also spoken out on their own race dilemmas. Coining the hashtag, #BlackOnCampus, students around the world are addressing their racial encounters.

With all of that said, what about us? How is it for a black student at Suffolk University?

Long stares at my afro-textured hair, being the last pick for a group project, left out of conversations with classmates, and feeling uncomfortable to explain “white privilege” to a group of mostly white students as a student leader, are only a few things I have experienced at Suffolk.

It seems to be clear to many that our school has its own issues with race and prejudice.

The Office of Diversity Services and Suffolk’s Black Student Union hosted a discussion on Nov. 13 where all students and faculty were invited to openly express their concerns and experiences on race incidents in light of the Mizzou incident. This was a great start for the community to face the issues of social segregation at Suffolk and the challenges black students are forced to tolerate every day.

On a daily basis, a black student may deal with being forced to speak on black issues in a class of only white students, explain to others that their hair is not be touched without asking, get ignored by professors, and debate with a white student who inaccurately speaks about race and oppression. It would be very wise of Student Government Association to point out these issues since it does strongly affect the student body.

In addition, allies are critical to have on campus because students of color need those who care and understand the mistreatment that they themselves are not experiencing. However, an ally does not speak over and rob the voices of the oppressed, but stands by them.

A great point out of the meeting was alerting students that there are people on campus willing to listen and help. Although the wonderful folks from BSU and Diversity Services are great resources, consider Suffolk’s counseling center at 73 Tremont and the Interfaith Center at Donahue for guidance. For serious incidents, please go to a Dean of Students.

Keep the race conversation going because college students should be focused on education, not oppression.