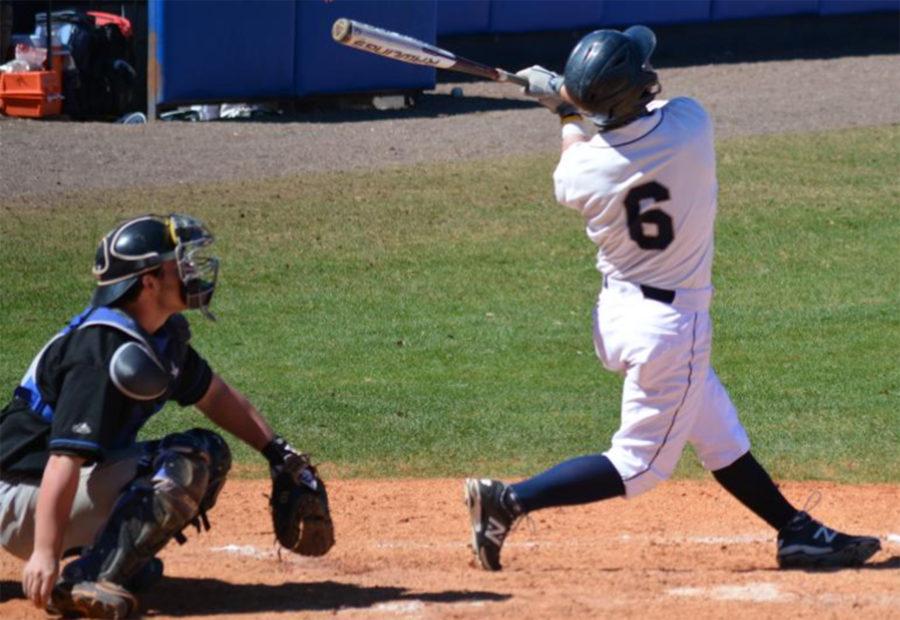 Rob Marks (top) is a three-year veteran of the team. Courtesy of Suffolk Athletics

The Rams are three games away from completing their 2015 regular season, and after the first 29 contests, it’s clear the team has regressed.

Their overall record of 14-16, is underwhelming, while their conference record of 9-5 is better, but still a far cry from last year’s club. The 2014 Rams were conference champions and 12-2 in conference play with a 26-14-1 overall record, significantly better than this year’s team. But with the playoffs approaching fast, the Rams still have a chance to make amends.

“Compared to the previous year, 9-5 is kind of a disappointment,” said Rob Marks, an outfielder and three-year veteran of the baseball team. “We’ve lost some games we should’ve won. I’m confident in this team, though. When we need to step up.”

Marks’ comments can be backed up, too. The Rams had a huge two-game set against the GNAC rival, the Saint Joseph’s College of Maine Monks this weekend, splitting the doubleheader. The Rams dropped the first game in a painful fashion, surrendering three unearned runs and losing by a final score of 6-4. After being staked to a 3-0 lead, starting pitcher Josh Desai threw six innings, giving up 10 hits. He walked four and yielded six runs, three earned.

The offense was not able to maintain their pace set in the top of the first, as they failed to score again until the fifth inning. The lack of offense accompanied by Desai’s rough outing and the team’s poor overall defense would eventually doom the Rams.

Not to be discouraged, the team quickly put the first game behind them, and came out in the second game determined.

Freshman hurler Jake Flax got the start, falling one out short of a complete game while surrendering nine hits, four runs — two earned — and walking just one. The defense bounced back too, making just one error over seven innings. Marks and first baseman JC Collette provided most of the offense, driving in two runs apiece. The win pushed the Rams aforementioned conference record to 9-5, as the Monks fell to an overall 22-12.

“We have a lot more talent than our record shows,” said Marks, a sociology major. “We just have to stick to it. I’m pretty confident that our best baseball is ahead of us.”

On Tuesday, the Rams defeated the Albertus Magnus Falcons by a final score of 10-5. The win was the team’s first of the GNAC playoffs, and third against the conference rival Falcons, a team they’ve outscored 21-11 in three games this season.

The Rams will conclude the regular season this week. On Tuesday, April 28, they will take on the Salve Regina Seahawks, followed by a non-conference matchup with the UMass Dartmouth Corsairs on Thursday, April 30 at 4 p.m.  And finally, the Rams will play a doubleheader against Williams College Saturday at 1 p.m. and 3 p.m.