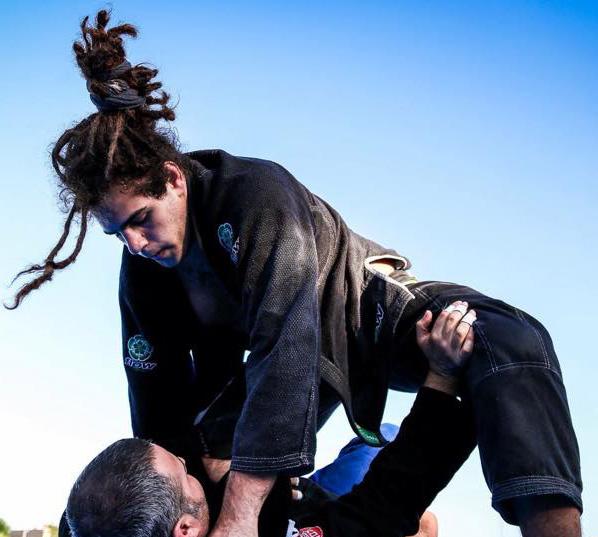 While most athletes at Suffolk can be found on a field, at the rink or on the court, there are a select few who choose to hone their abilities elsewhere. Omar Qusrawi is of the latter.

On a typical day, he can be found across the street from the TD Garden, at Combat Sports Boston, wearing a gi while working at his craft on the mat. Qusrawi, a junior at Suffolk from Ramallah, Palestine, has been a martial artist for more than four years, training primarily in Brazilian Jiu-Jitsu (BJJ). It’s commonly referred to as “the gentle art.” There’s no punching, no kicking and no throwing knees. But with the right amount of technique, BJJ can win a fight without harming either competitor, and Qusrawi knows just how to make that happen.

“I’m a blue belt,” said Qusrawi, a public relations major. “The way the belt system works is there’s white which is the lowest, blue which comes after that, then there’s purple, brown and black.”

Despite blue being just the second color awarded to students, moving from any one belt to another is a long, difficult process. And getting to blue is no cakewalk. Students must prove their skill level is deserving of a new belt by training often, exhibiting a strong understanding of technique, applying said technique, and of course, competing. Lucky for Quswari, another chance for him to show the fruits of his labors in the gym have paid off waits just around the corner.

On Saturday, one of the major local tournaments, known as the Boston Open, will take place. Qusrawi has taken part in events like these many times before, and at this point in his career, has developed a system that best prepares him for the physical chess match that is BJJ.

“In my first competition I was a bundle of nerves the whole way through,” said Qusrawi. “Once I got that out of the way, it just turned into preparing for the next fight. I’ll change my diet a couple weeks before hand, then I’ll taper off  [my training] two weeks before the competition, and make it a little bit harder the week of.”

With his dreadlocks tied back, and his blue belt wrapped firmly around his gi, he finds the gym at Combat Sports Boston to be a home away from home, despite it being approximately 5,497 miles away from Ramallah.

“Five minute rounds,” shouts Qusrawi’s coach, as all the fighters bump fists to show mutual respect, before the bell rings signaling the beginning of their next their round. Quswari then grabs his opponent’s lapel — the elongated collar of the gi, which extends vertically down the chest — and begins to battle for a dominant position, and ultimately a submission. In BJJ, the goal is to lock an opponent into a submission, forcing them to tap out. A submission can be a choke, an armbar, a leg lock, or an omoplata amongst many others.

Quswari’s personal favorite: the kimura. To pull off this submission, a fighter must grab their opponent’s wrist, slip their other arm under their opponent’s arm, grab their own wrist and crank the opponent’s arm behind their back. The force from the kimura should force a tap out from the opponent, in an attempt to avoid serious damage to their shoulder. Sounds fun, right? Well, according to Quswari — an advocate of the martial art — it is.“Do jiu-jitsu,” said Quswari, adamantly. “It’s fun, it’s interesting. It’s the only sport where you can fight someone, put your heart and soul into it, and then at the end you can be friends.”