Albrecht Durer on display at the MFA 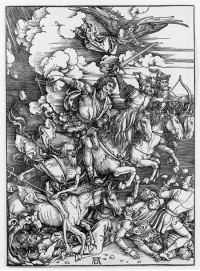 The Museum of Fine Arts has opened an exhibit dedicated to Albrecht Durer, a German artist known for his black and white woodcuts, etching and engravings of religious images.

Durer was born in 1471 in Nuremburg, Germany, which was a major intellectual and artistic hub in the 1500s. Durer was introduced to engraving by his father, a blacksmith, who taught him how to use the tools meant for engraving.

While traveling across Europe, Durer was introduced to “new” Renaissance art. This art is unique because, according to the MFA, it has “interest in the classical past and concern with the geometrically accurate depiction of three-dimensional space.”

Durer presented many religious images, including those of Jesus, the Virgin Mary, and Adam and Eve. He often included horses as a symbol of strength, and of nature and sky, with the sky being a symbol of heaven. His work is realistic, with amazing details and fine lines flowing through his pieces.

One of Durer’s biggest fans is Karen Pike, an art history teacher at Northeastern University. “His work is stunningly beautiful. I have admired it since I was a sophomore in high school,” Pike said. Durer has been dead since 1528, but he should feel assured that someone has been his fan for 45 years.

Durer published many books of woodcut throughout his life, three being his most well known: “The Apocalypse,” “The Large Passion” and “The Life of the Virgin.” Out of all his art, “The Four Horsemen” from “The Apocalypse” tends to be the most famous.

Created between 1497 and 1498, “The Four Horsemen” is a woodcut that portrays four men on horses, with humanity underneath them as it gets crushed by the hooves of the horses. The mouth of Hell, which looks more like a dragon, is open in the lower left corner and is about to swallow the humans that are being trampled by the horses. The fine lines in this piece are intense, with great detail, and it’s hard to believe that Durer could carve lines as thin as these onto wood before placing the ink on top to portray the image.

As Karen Pike stared at his work, she continued to say on how she is “amazed at the prints from [the wood] blocks,” and how Durer “achieved such volume in the small spaces.”

Another famous piece by Durer is “Knight, Death and the Devil.” Created in 1513, this is one of his best engravings. Like “The Four Horsemen,” this piece has a great deal of detail. According to the MFA’s description of this piece, the horseman is “believed to be a representation of a virtuous, steadfast Christian knight whom Death and the Devil are unable to distract.”

Durer mastered all creative fields, from engraving to painting to etching to portraits. He is known for being an artistic genius during his time, and it would be hard to picture where art would be without him.

The Albrecht Durer exhibit at the Museum of Fine Arts will be on display until July 3, 2010.