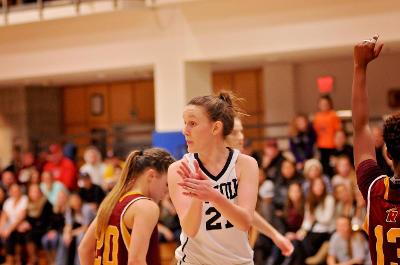 You may know who Cal and Billy Ripken are: the brother tandem who played together for the Baltimore Orioles. How about the Staal brothers, Eric, Jordan and Jared, of the Carolina Hurricanes?

But have you heard of Suffolk University’s Illiana and Alex Quadri? The Lady Rams have their own sibling power-duo. The Quadri sisters have helped the women’s basketball team amass an impressive 8-3 record in conference play heading into the GNAC playoffs. And in their final year on the court together, the girls have played exceptionally well.

The elder Quadri, Illiana, a senior, finished the regular season as the team leader in points-per-game with 12.7, assists per game with 2.2, and minutes per game with 33.2.

The younger of the duo, Alex — in her junior campaign — has posted similar numbers. The forward was tied with Shelby Santini for second most points-per-game with 10, and has averaged 1.5 steals per game. She has also been a defensive force on the boards, averaging 5.8 rebounds per game, with 4.6 of those coming on defense.

As is the case with any winning basketball team, chemistry is one of the main ingredients for success. And between the Quadri sisters, there’s an abundance of it. Illiana lauded the harmony between the two, deeming it a large factor to the success of the tandem.

“We always know what the other is thinking, and just read each other,” she said. Which is something essential, especially for a floor general like Illiana, who often has the ball in her hands.

In Alex’s opinion, the longevity of the pairing is what she appreciates most. “We’ve been playing together since we both started playing,” said Alex. “It’s not everyday you have the opportunity to play with your sister in general, but from middle school, to high school and now college. I just wouldn’t want it any other way.”

As the year progresses, it has become apparent that Alex — despite being the younger of the two — has already been inserted into a leadership role, all while sitting toward the top of the roster statistically.

“Alex has become one of the best players on the team,” Illiana said. “When I’m on the court, I always look to her to get it done.”

But there’s more to Alex’s value to the Lady Rams. As Illiana’s time with the team winds down, Alex will be looked to by the team, and by her older sister, to step in next season as even more of a leader. Luckily, she’s well on her way, and is already considered one of the team’s most outstanding pacesetters.

“She has really stepped up and is probably the best leader on our team, and always bring the energy,” said Illiana.

From where does Alex get those traits? Well, if you ask her, it’s pretty clear.

“[Illiana] has taught me a lot, both on and off the court,” said Alex. “One quality I admire most about my sister is her strength. She never lets up and she’s never scared.” It’s hard to disagree with Alex, considering her critically acclaimed sister’s bevy of team leading statistics.

The Lady Rams defeated Rivier in the GNAC quarterfinals this past Tuesday. Fortunately for the Lady Rams, the Quadri sisters will be suiting up again, ready for the run that may be the duo’s swan song.

“She is my best friend,” said Illiana, “there’s no one I would rather play with than her.”