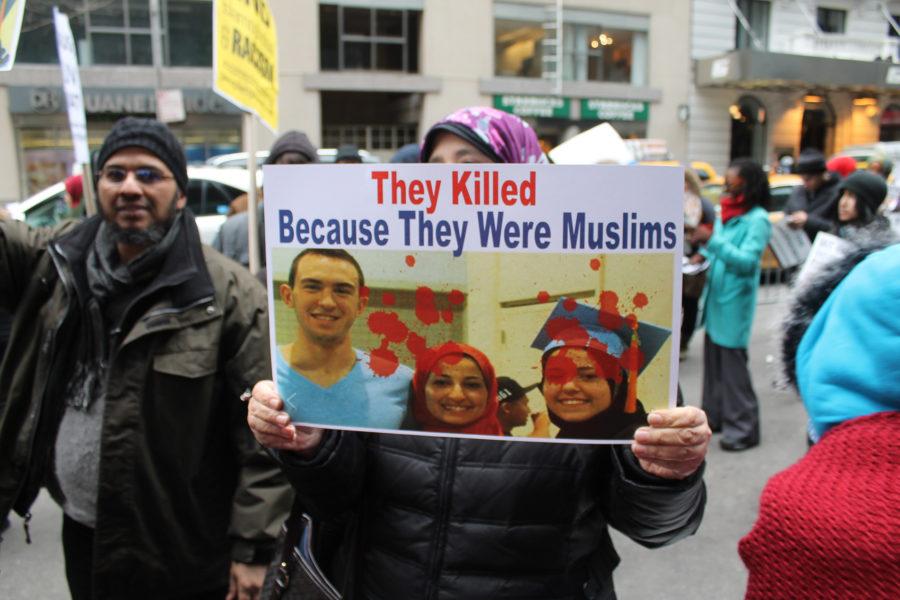 The shooting of three North Carolina State University students on Feb. 10 has caused an outrage in the Muslim community. Deah Barakat, 23, his wife Yusor Abu-Salha, 21, and her younger sister Razan Abu-Salha, 19, were shot in the head “execution style” in their home in Chapel Hill by their 46-year-old atheist neighbor, Craig Hicks, according to BuzzFeed News. Barakat and Abu-Salha had been married a little more than a month.

Chapel Hill police officers released a statement on Wednesday morning that said the brutal murders were motivated by an “ongoing dispute over parking.” But the three bright, young students were of Arab descent and shared an Islamic faith, leading some people to question the motive of the killing and whether it was a hate crime.

The outrage from Muslims poured onto social media networks like Twitter and Facebook. Users in my Twitter feed were questioning why mainstream media outlets have been reluctant to label Hicks as a terrorist for the crime he allegedly committed. Others were sure race and religion played a part, and that because Hicks’ is a Caucasian-American and not Muslim, he would never be charged with this label.

“We have no doubt that the way they looked and the way they believed had something to do with this,” said Mohammad Abu-Salha, father of Yusor and Razan, to CNN.

As a Muslim-American myself, I came to this country at a young age to pursue the “American dream.” But that notion seems to have blurred now, as safety is something me and my family constantly worry about, simply because of the religion we believe in.

The ongoing question is: why do mainstream news media outlets have an agenda against Muslims? News stories tend to focus on the heinous acts committed by ISIS but do not care to talk about the crimes committed against Muslims in America. Because of the way Muslims are portrayed in the media, innocent people of the Islamic faith are held accountable for the actions of a minority.

“Had roles been reversed and the man was Muslim, was of Arab descent, was of South Asian descent, this would have immediately been labeled an act of terror. I haven’t heard anyone use the term terrorist here, but why the double standard?” Dr. Suzanne Barakat, sister of victim Deah Barakat, said in a heart-breaking appearance on CNN.

On MSNBC’s Morning Joe, she also said Hicks was not a good man and often flashed his gun at the three victims because he didn’t want them to park in the visitor parking spot. On Hicks’ Facebook page, he has expressed hatred for many religions and posted pictures of his guns.

The shooting is not the first in a line of crimes attempted against Muslims because of their faith. According to Al Jazeera, just a day before the shootings, Mustafa Muttan, a young Somali Muslim was shot and killed in his apartment in Alberta, Canada, and on Friday, a mosque was set on fire in Houston, Texas. The Providence Journal even posted a picture of a non-profit Muslim school in Rhode Island which was vandalized with Islamophobic graffiti on Saturday.

In a nation known as a “melting pot,” with people of different races, religions and backgrounds, white privilege still seems to be at large in the U.S. If the roles were reversed and it was a Muslim who shot and killed three people, the crime would have been perceived as an act of terror, resulting in headlines.

However, because Craig Hicks does not come from a Middle Eastern background and is not Muslim, the media merely excuses him as someone who is a troublemaker and just obsessed with parking. Inside Edition even mocked the victims’ deaths by using the tragedy as a segue into a story on how to find good parking at the mall.

In order to be a truly valuable member of this society, it is imperative that you not only acknowledge injustices but also examine the privilege you may experience in daily life. Your friends of other races and ethnicities may be living in the same place as you, but in a life riddled with fears and inequalities.

Yes, we’re all equal when it comes to how we deserve to be treated in this world. But you are doing yourself and others harm if you decide to choose ignorance over acknowledgement. Take the time to educate yourself on what’s happening around you. God willing one day the world will be at peace and no one will have to be scared for his or her life because of the color of his or her skin or faith.