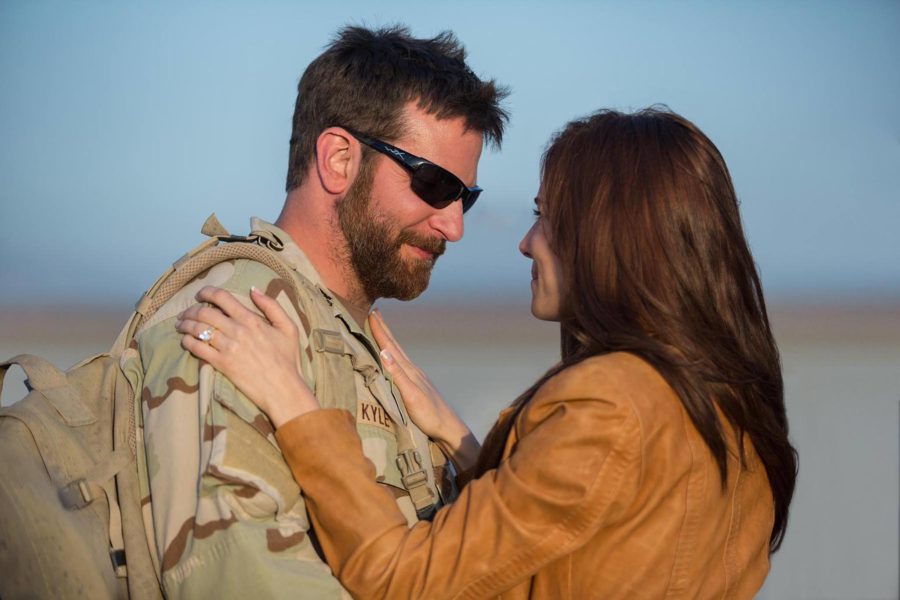 It was apparent that Clint Eastwood was at helm of, American Sniper. After the first 10 minutes of Bibles, American flags, camo-wear, lots of beer, and semi-abusive fathers, you could clearly sense Eastwood’s artistic style. However, these clichés fit seamlessly. The film, set in Texas, depicted many symbols and characteristics similar to other Hollywood blockbusters made in the Midwest part of the state.

The story’s protagonist, Chris Kyle, as played by a gigantic, 250 pound Bradley Cooper, is widely considered to be the U.S. greatest sniper of all time, with an estimated 255 recorded kills. He’s tough, he’s manly, and he’s a Texan. And boy, did Cooper fit the part. The juggernaut was more than believable, as he transformed from cowboy-wannabe, to a respectable Navy SEAL. Humble, and impressive, Cooper was able to express the hardships faced by those who choose to fight overseas, as the steady progression of PTSD from each of his four tours became more evident each time he returned home.

Cooper deserves praise for being able to act with such little emotion at times, and recreate what it was like for Chris Kyle to be home, knowing that his brothers in arms were still in battle. Cooper also did an exceptional job recreating the nonchalant attitude of the sniper in combat. Not to be outdone, his co-star, Sienna Miller, turned in one of her greatest performances to date, as she masterfully recreated Taya Renae Kyle, the wife of Chris Kyle.

Miller greeted fans at the screening at Loews theatre on the Boston Common, answering questions about the film.

“Holy ‘s,’ its Clint Eastwood. Holy ‘s,’ it’s Bradley Cooper. Please can I go in and read for this part?” Miller said when asked what her initial reaction to the project was.

As viewers, let’s be thankful that she took the role.

It is incredibly difficult to walk the line and convey to the audience a character that is both the annoying, emotionally damaged wife who sobs for the duration of the film but also the strong woman that Taya Kyle is as well. Miller bravely took on the part, spending extra time with Taya Kyle to learn her character, and gave an exceptional performance. The emotion of a wife raising children while her husband is overseas for roughly 1,000 days is tough to recreate, so I give Miller a lot of credit and praise.

Because the film is an adaption of a true story, there is always plenty that could go wrong in its production; characters depicted incorrectly, emotions conveyed unimpressively, etc. American Sniper, with the exception of a few minor character discrepancies, overall stayed true to the book released in January 2013.  The film conveyed a sense of patriotism, sadness and perseverance. Just be weary, you won’t be able to predict this film’s ending until it hits you, square in the heart.