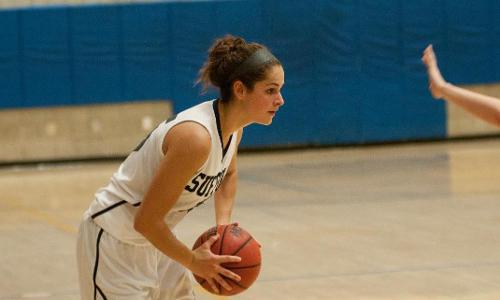 Final in series on injured athletes.

Just days before the opening game of the season, Georgia Bourikas, Suffolk women’s basketball shooting guard, was engaged in a casual pickup game with her teammates. She drove toward the basket, and went up for a routine layup. After her descent, Bourikas landed awkwardly and felt what she described as though her “knee popped out.”

“It’s not only been a struggle for Georgia, but for everyone around her … It makes me mad that I have to see her go through it,” Kayla Layton, the suitemate of Bourikas, said about the injured athlete.

According to Jeff Stone, Suffolk’s athletic trainer, Bourikas suffered a complete tear of her anterior cruciate ligament (ACL), as well as a bone bruise. The injury — although fairly common among athletes — is severe.

Despite hearing about these brutal injuries in cases like local professional athletes Tom Brady or Rajon Rondo, many can be blind to what happens to the athlete between the injury and their return to action. For some, the recovery time is easy. But not for all.

The longtime-athlete has been injured before. Playing many sports growing up, Bourikas has sustained broken bones in her wrist, injured her elbow, been through the classic ankle sprain and has had issues with her knee. However, those injuries pale in comparison to a torn ACL, largely because of the difficulties that the injury materializes in day-to-day life.
Bourikas, a fine arts major at the New England School of Art and Design, has a significantly longer commute to class than most Suffolk undergrads. NESAD is located at 75 Arlington St. in Boston, making for a lengthy walk from the 10 West dorms, where she resides. Making the trek with a torn ACL has proven to be cumbersome for Bourikas, who said she has been forced to seek alternative means of transportation.

“I contacted the dean of students, Anne Coyne, and I was back-and-forth with her and my professors notifying when my surgery would be, and asking if there was any means of transportation for them to provide temporarily,” said Bourikas.

Bourikas was told to contact disabilities services, but when she called the desk, she was told that Suffolk could not provide temporary transpiration services, and to instead call “THE RIDE.” One of the features of the Massachusetts Bay Transportation Authority, “THE RIDE,” according to the MBTA’s website, provides services to those who cannot use “fixed route transit (bus, subway, trolley) all or some of the time because of a physical, cognitive or mental disability.”

But, THE RIDE is not an option for Bourikas.

Transportation via the Suffolk University Police Department is also not an option.

“When I was at the art school, I asked an SUPD officer if there was anyone who could drive me to Ridgeway, that way I wouldn’t have to hail a cab … They said, ‘yeah, of course,’” recalled Bourikas. “Then they said it was a ‘one time deal,’ and I had to go through disability services because they couldn’t keep doing this.”

Because of the lack of transportation from the university, Bourikas has been using Uber, which is a car service, as an alternative to a taxi.

“It’s expensive and not that reliable. [The drivers] would be late, and make me late,” Bourikas said. “My professors have been really understanding, so they were fine with the outcome. But my parents are paying for it, and I’m not being reimbursed.”

The base cost of Uber’s cheapest option, UberX, is $2, plus 21 cents per minute, or $1.20 per mile, with a cancellation fee. As of now, Bourikas said she has spent hundreds on Uber transportation alone this year.

Stone said he believes the university could be doing more to benefit students.

“To maneuver the kids around is, I think, an area that the university needs to look at to help benefit [the athletes.] My rule is, when a kid gets hurt, we call the dean of student’s office,” said Stone.

“We try to accommodate the kids through [student] disabilities, and I think we miss the mark that we don’t have a campus shuttle system … We don’t have a way to get those kids, when they are injured, at least back and forth to class. We as a university need to look at that for the benefit of all students.”

Currently, Bourikas is seeking a more ideal living situation, so as to ease the difficulties of transportation. She is still a few months away from returning to the court, but is optimistic that with her dedication to rehabbing regularly, and being smart about how she trains, that she can be back on the court sooner than expected.

It’s a tough situation, but with unwavering support coming from her friends, family, her team and the athletic staff, Bourikas said she hopes to regain her prior form, and ultimately help the Rams win games again.