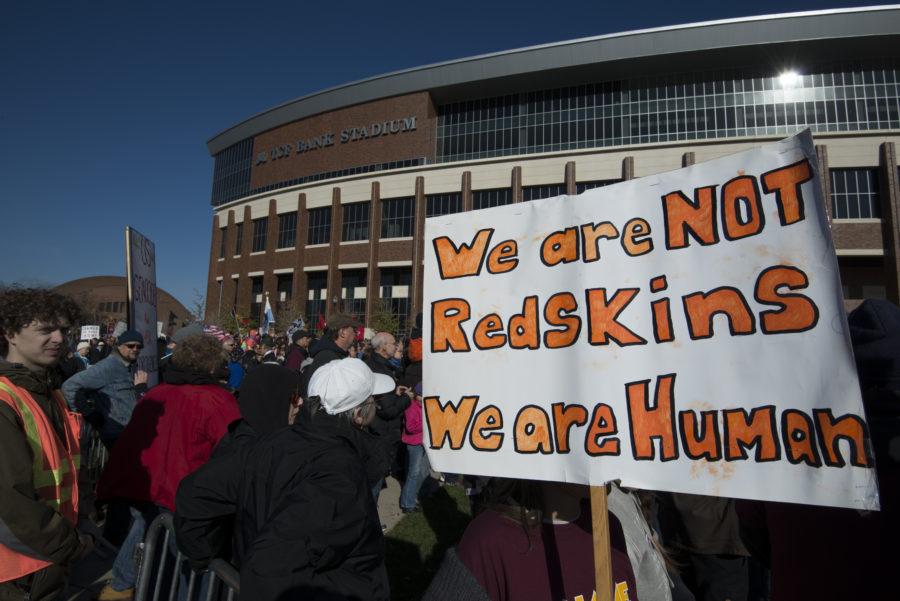 The NFL team playing in Washington has a racist team name. Period.

The “R” word will not be used in this article, in the same way that as a journalist, I would not write or speak any other racist, homophobic, or sexist slurs.

Dan Snyder, owner of the Washington team, continues to express that the team name is meant to represent things like pride, unity, and other uplifting ideas.

Washington faced the Minnesota Vikings at TCF Bank Stadium Sunday, which is near the Minnesota Trial Nations Plaza, according to The New York Times.

Several hundred protestors marched outside the stadium prior to the game, wearing T-shirts that read things like, “Rename” or “Replace,” in the Washington team font and colors, according to USA Today.

People still just don’t understand the problem. Native Americans are one of the smallest minorities in the country, so obviously the outcry will not be as loud as it could be.

Amongst the most common rationale of people defending the name is something like, “you are not Native American, why does it matter?”

It’s called caring about others being offended. A large group of Native Americans have claimed the team name to be offensive, so if they are offended, we should listen.

I have listened for more than two years now, and my opinion has been swayed. We have TV networks having “heated debates” about the subject, but no one ever brings a Native American on to talk or communicate their feelings. Apparently a sensitive conversation with a Native American is not as entertaining as two white people yelling in an intense debate that will go viral.

And no, being one-eighth Cherokee does not allow you to invalidate other Native Americans’ oppression because you find this movement “obnoxious” or “whiney.”

One of Snyder’s defenses is an outdated 2004 Annenberg study, which claimed 90 percent of a sample from a group of 1,000 self-identified Native Americans did not find Washington’s team name offensive.

This group only represents less than 1 percent of the Native American population in America. Plus, “self-identified” means anyone who has a fraction of Native American ancestry could give his or her contribution to the poll.

After  Halloween, it is obvious that cultural appropriation is still a problem, especially with dressing up as a stereotype of Native Americans. I walked through Faneuil Hall to see college girls with costumes identified as “sexy Indians,” and guys wearing fake war paint with their shirts off.

Ignoring racism is part of the problem, and this is a large reason for calls of a name change in Washington. The argument needs to stop. Debating about what other people find offensive is just prolonging inevitable change.

The movement for the name change is still alive and well. Change the name and stop using a racist slur.