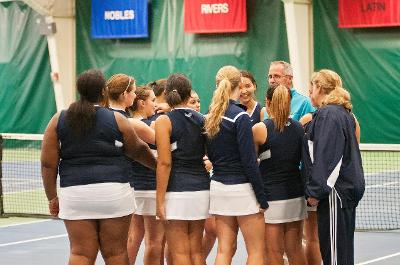 The Suffolk University women’s tennis team is in the GNAC playoffs.

They are set to play sixth seed Mount Ida Mustangs Wednesday, who only has one conference game this season.

The Lady Rams beat the Mustangs at the beginning of the month in straight sets, 9-0.

Albertus Magnus did not win a conference game this season, and they were the only team the Mustangs managed to defeat.

The GNAC regular season title belongs to Simmons College followed by Johnson & Wales in second. The Lady Rams sit strong at the third seed, but failed to beat either of the top seeds. Both games they lost 2-7.

Aidiana Sagyndykova is the strong link in the Lady Rams rotation. She is 11-1 playing in the No. 1 singles spot, which means she has defeated the best opponent for 11 different schools.

Sagyndykova also plays first doubles with senior Adrianna Garrett, and the two are 10-2 for the No. 1 doubles. That means Sagyndykova’s overall record in singles and doubles versus No. 1 seeds is 21-3.

Becca Eshoo could be referred to as the “unsung hero” for the Lady Rams this season. Along with Sagyndykova, they are the only two who have a singles record above .500 while playing over 10 singles matches.

Eshoo is 8-5 this season (8-4 from the No. 3 singles spot), but she is also 8-2 in her last 10 matches, which shows she is improving in her conference matchups.

She does not have a standard slot for doubles matches, but overall she is 6-7 in doubles matches she has partaken in. On paper that is below average, but partnering up with five different teammates shows how versatile she can be.

One of the strongest doubles teams in the regular season is the combination of Jacqueline Nakamura and Isabel Rathlev. The two had a successful season from the No. 3 doubles slot, finishing 6-2 on the season, and 3-1 against conference opponents.With eyes and minds on the playoffs, the Lady Rams confidence should be sky-high facing the Mustangs in the first round. Assuming they can get their second win of the season against the Mustangs, then the road to the GNAC championship becomes more challenging facing Simmons or Johnson & Wales in the semi-finals.

The Lady Rams will play this weekend, Saturday Oct. 25. If they manage to defeat the Mustangs and win on Saturday, the GNAC championship will be played Sunday Oct. 26.