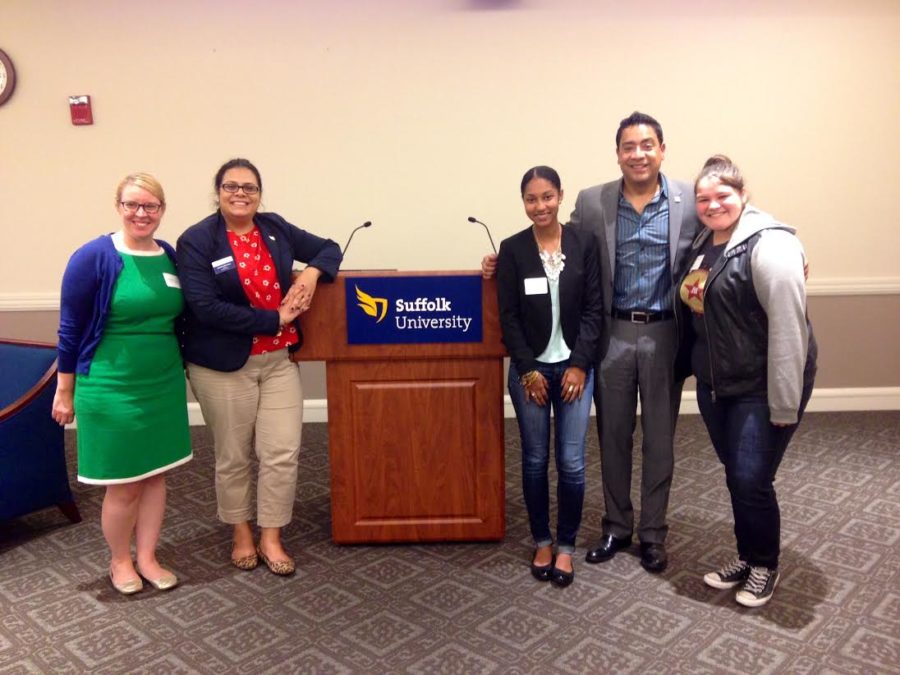 Javier Pagan, one of the first Boston Police officers to assist at the Boston Marathon bombings, a LGBTQ liaison for the Boston Police Department, and alumnus of Suffolk University came to campus to speak about his career, his identity, and how both influence each other.

Pagan, who is the youngest of five, was born in Puerto Rico and then moved to the Dorchester neighborhood of Boston after the busing crisis had occurred.  During this time, Boston had ordered students to be bused around to different schools in order to desegregate them.

“It was becoming diversified but it wasn’t as diversified as we would’ve hoped,” Pagan recalled. “Certain things would happen, like my mom would take us to school and people would throw beer bottles at us, call us the N-word.”

Being from Puerto Rico, he said he and his siblings didn’t know what the word meant.

He credits his mother with giving him a positive outlook on life.

“She would say, ‘there’s always bad people in the world, but there are more good people’ … I could’ve taken that and made it into a negative, or turned it into a positive.”

The easygoing, well-dressed and well-spoken Pagan described how he dealt with negativity surrounding his cultural and sexual identity at Suffolk University Law School last week.

“I took the path of dealing with such negativity growing up and seeing the disparity and the way people are treated when they are different …Most GLBT, we’ve come a long way with gay marriage and ‘Don’t Ask, Don’t Tell’ but there are those that are still mistreated.”

Being Latino and gay aren’t the only components of his identity. Pagan was also raised in a Catholic home, and being gay wasn’t really accepted.

“In kindergarten, we used to have to hold hands when we went walking from classroom to classroom, but whenever I touched a girl’s hand my hand felt clammy.” When he touched a red-haired boy named Russell’s hands, he felt a shock, he said.

“I didn’t know what gay was, and gay icons were not on TV at the time, it was nothing sexual. I was just different.”

At 26 years old, Pagan came out to his family and friends, and, to his surprise, they already knew. He said that they had been waiting for him to come out for some time, or just didn’t care that he was gay.

After graduating from Suffolk in 1993 with a degree in sociology, Pagan took a job in the private sector for a telemarketing company called SalesLink. Two years later, he took the civil service exam. While at Suffolk, Pagan was chair of Program Council and a member of the Suffolk University Hispanic Association.

After he went through the police academy, he was assigned to District four, which is now the South End.  “D-four was the gay mecca of the city at the time. I wasn’t out in the academy yet, but I think it was my awakening moment, seeing people walking around holding hands.”

Pagan went on to become a GLBT liaison for the Boston Police Department, and has been since 2002. His philosophy as a police officer is “if you treat people with respect, you avoid half the [stuff] you deal with.” He tries to make inroads in communities of color, and all communities that don’t trust cops. “We try to embrace and try to let people know that they can feel free to come to the police.”

For any Suffolk student hoping to become a police officer, he offered advice. “If you’re taking this job and you can’t deal with being called a name, then don’t take this job.”

Pagan went on to describe his experience at the finish line when the first bomb exploded at the 2013 Boston Marathon.  “Right where the first explosion happened, that was my assignment.” Pagan said he was supposed to face the crowd and make sure there were no radicals. He moved to step out of the way so that he wouldn’t land in people’s pictures. “All of a sudden we hear ‘boom.’ Pagan said he thought it was a manhole explosion or a generator.

“We started running to the first explosion and then the second one happened,” he said. Referring to the Sports Illustrated cover he was featured on, he said, “They’re in different positions in the photo, they’re in ‘Charlie’s Angels’ pose because all of the officers were running in different directions. They didn’t know where the explosion was coming from.”

Pagan says he was fortunate to be able to go home to his husband, a New York Police Department officer who served at Ground Zero on Sept. 11, 2001.

He was assigned to work the Boston Marathon this year.  “Even though it was a year later, you could see that people were healed,” he said.

This event, held on Oct. 1, was part of LGBTQ History and National Hispanic [American] Heritage month, and was a collaboration between Diversity Services, Suffolk’s Alumni Association, Rainbow Alliance, and Suffolk University Hispanic Association.