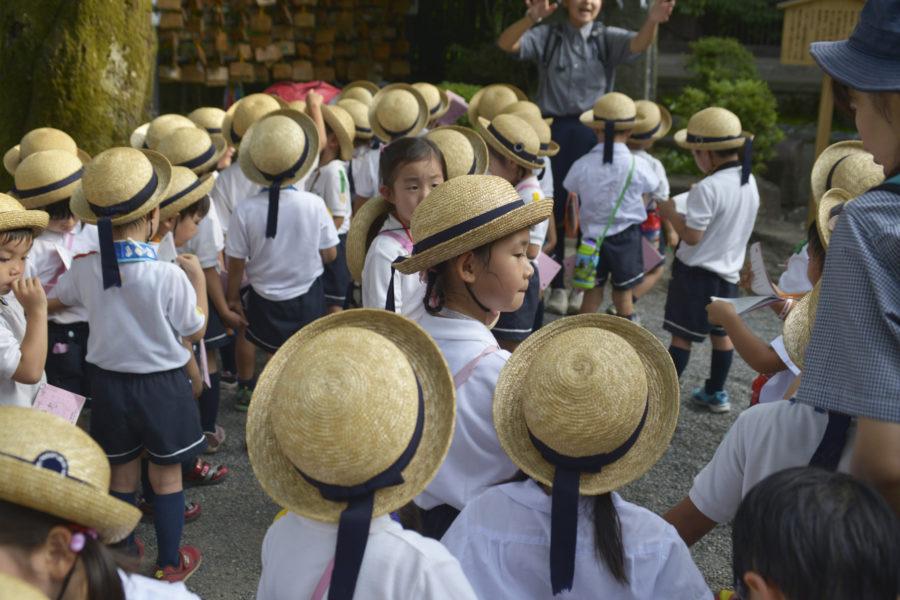 The lights dim in the Sawyer Library’s Poetry Center, the shades are drawn, and a serene photo of a Japanese bride is illuminated onto the projection screen.

Photojournalist and professor at Suffolk University, Ken Martin, traveled to Japan this summer to attend the wedding of his friend Tsuyoshi Toya, and his wife, Kazumi Suzuki. The wedding was in Chiba City, Chiba Prefecture, Japan.

Martin was able to strategically capture the sequence of events of a traditional Japanese wedding and learn from a photographer’s perspective of Japanese culture.

“I used a telephoto lens for some of this which helps to knock the background out,” Martin said during his presentation last Thursday, explaining his method of taking the bride’s portrait.

“Shooting with a Nikon makes things easy for me, and as cameras change every two weeks, I still know how to use the basic functions,” Martin said with a laugh.

“I’m always searching for the truth behind appearances with my photography,” Martin said on his own enlightenment and personal discipline. While traveling throughout Japan, this is something he always strived for.

To avoid looking like a tourist, Martin would begin by always asking permission before taking a photo, he said. In places like Senegal, however, where Martin has done a lot of photography, it’s very difficult.

As a photojournalist, one must understand the method of going from highly developed countries, to ones that are third world, according to Martin.

“The attitude is, ‘they’ve got all this expensive equipment, they’re taking my picture, they’re going to make money with it.’”

It is crucial as a photographer to make a human contact first, then point and shoot.

“If you walked into a room [full of people], you wouldn’t just get started,” he said. “You’d walk in, shake hands with everyone in that room, and look them in the eye to acknowledge their existence. If you miss one person, you’ve lost a friend.”

Martin made his way to Tokyo during his time in Japan.

“For me, everything was kind of greyish in the big scenes of Tokyo,” he recalled. “Color took place when you get close and find the small neighborhoods.”

Experimenting with taking panoramic photos is one of Martin’s fascinating talents. Martin explains his process, “By making four or five different photographs, mostly vertical, starting from left to right. I overlap them by 20 to 30 percent,” and merges them within Adobe Photoshop. When completed, a panoramic image might be roughly five feet long. “It’s a way of creating a wide-eyed angle that you might not get otherwise.”

Traveling through Hakone, Martin had always wanted to see a tea house and ceremony. They are usually off the beaten path through dark forests, Martin said. “The light is wonderful, and of course I always ask permission before photographing.”

“It was all in a haze, and we were told that we were not going to see the mountain,” he said. But as luck would have it, “As soon as we got out of the car, the clouds parted, and we got a view, then the clouds closed again.”

Martin was also able to visit the most famous building in Japan, the Golden Pavilion in Kyoto. He explained Japanese garden design, and how, “Fitting architecture into nature was what it was all about, and that’s why we’re always attracted to these kind of things.”

The appearance behind things are more than what they seem, Martin explained. “This beautiful serene scene was overwhelmed with tourists from all over the world. Of course, everyone wants to get in just the right spot to get the typical photo.”

Martin refers to one of his greatest inspirations, that photography is made by a decisive moment.

“Each and every photographic situation has a decisive moment where there is peak energy for the best shot. In that shot, all your life experiences come to you in that fraction of a second, and everything you learned comes to you then,” he said. Whether it’s about photography, life, history, or people, that moment is what Martin lives for.

Martin’s work can be viewed on his website at zenfolio.com/kennethmartinphotography.